The Force & a Higher Power

Obi-Wan Kenobi: "Well, the Force is what gives a Jedi his power. It's an energy field created by all living things. It surrounds us and penetrates us. It binds the galaxy together."

Darth Vader: "Don't be too proud of this technological terror you've constructed. The ability to destroy a planet is insignificant next to the power of the Force."

Admiral Motti: "Don't try to frighten us with your sorcerer's ways, Lord Vader. Your sad devotion to that ancient religion has not helped you conjure up the stolen data tapes, or given you clairvoyance enough to find the rebels' hidden fort..."

Darth Vader: "I find your lack of faith disturbing."

Grand Moff Tarkin: "Enough of this! Vader, release him!"

Darth Vader: "As you wish."

Han Solo: "Hokey religions and ancient weapons are no match for a good blaster at your side, kid."

Luke Skywalker: "You don't believe in the Force, do you?"

Han Solo: "Kid, I've flown from one side of this galaxy to the other. I've seen a lot of strange stuff, but I've never seen anything to make me believe there's one all-powerful force controlling everything. There's no mystical energy field that controls my destiny."

Han Solo: "It's all a lot of simple tricks and nonsense.

“I see Star Wars as taking all the issues that religion represents and trying to distill them down into a more modern and easily accessible construct–that there is a greater mystery out there. I put the Force into the movie in order to try to awaken a certain kind of spirituality in young people–more a belief in God than a belief in any particular religious system. I wanted to make it so that young people would begin to ask questions about the mystery. Not having enough interest in the mysteries of life to ask the question, ‘Is there a God or is there not a God?’–that is for me the worst thing that can happen. I think you should have an opinion about that. Or you should be saying, ‘I’m looking. I’m very curious about this, and I am going to continue to look until I can find an answer, and if I can’t find an answer, then I’ll die trying.’ I think it’s important to have a belief system and to have faith.” -George Lucas in Time (http://content.time.com/time/magazine/article/0,9171,23298-2,00.html)

I am not inserting any texts from the Bible or Talmud here - there are so many texts on God :)

Luke Skywalker: "You know, I think that R2 unit we bought might have been stolen."
Uncle Owen: "What makes you think that?"
Luke Skywalker: "Well, I stumbled across a recording while I was cleaning him. He says he belongs to someone called Obi-Wan Kenobi."

Luke Skywalker: "What happened?
Old Ben: "Rest easy, son, you've had a busy day. You're fortunate you're still in one piece."
Luke Skywalker: "Ben? Ben Kenobi! Boy, am I glad to see you!"
Old Ben: "The Jundland wastes are not to be traveled lightly. Tell me young Luke, what brings you out this far?"
Luke Skywalker: "Oh, this little droid! I think he's searching for his former master... I've never seen such devotion in a droid before... there seems to be no stopping him. He claims to be the property of an Obi-Wan Kenobi. Is he a relative of yours? Do you know who he's talking about?"
Ben ponders this for a moment, scratching his scruffy beard.
Old Ben: "Obi-Wan Kenobi... Obi-Wan? Now that's a name I haven't heard in a long time... a long time."

Ben Kenobi: "Your father's lightsaber. This is the weapon of a Jedi Knight. Not as clumsy or as random as a blaster."

Luke pushes a button on the handle. A long beam shoots out and flickers there. The light plays across the ceiling.

Ben Kenobi: "An elegant weapon for a more civilized time. For over a thousand generations, the Jedi Knights were the guardians of peace and justice in the Old Republic. Before the dark times, before the Empire."

A man may not go out with a sword, bow, shield, club, or spear on Shabbat; but, if he does, go out, he incurs a sin-offering.

Rabbi Eliezer says: "They are ornaments for him."

And the sages say: "They are nothing but a disgrace, as it is said, 'And they shall beat their swords into plowshares, and their spears into pruning hooks: nation shall not lift up sword against nation, neither shall they learn war any more' (Isaiah 2:4)."

Darth Vader: "Don't play games with me, Your Highness. You weren't on any mercy mission this time. You passed directly through a restricted system. Several transmissions were beamed to this ship by Rebel spies. I want to know what happened to the plans they sent you."

Princess Leia: "I don't know what you're talking about. I'm a member of the Imperial Senate on a diplomatic mission to Alderaan...."

Darth Vader: "You're a part of the Rebel Alliance...and a traitor. Take her away!"

Grand Moff Tarkin: "Not after we demonstrate the power of this station. In a way, you have determined the choice of the planet that'll be destroyed first. Since you are reluctant to provide us with the location of the Rebel base, I have chosen to test this station's destructive power... on your home planet of Alderaan."

Princess Leia: "No! Alderaan is peaceful. We have no weapons. You can't possibly..."

Grand Moff Tarkin: "You would prefer another target? A military target? Then name the system!"

Grand Moff Tarkin: "I grow tired of asking this. So it'll be the last time. Where is the Rebel base?"

Leia overhears an intercom voice announcing the approach to Alderaan.

Princess Leia: "Dantooine. They're on Dantooine."

Grand Moff Tarkin: "You're far too trusting. Dantooine is too remote to make an effective demonstration. But don't worry. We will deal with your Rebel friends soon enough."

Luke Skywalker: "No, my father didn't fight in the wars. He was a navigator on a spice freighter."

Ben Kenobi: "That's what your uncle told you. He didn't hold with your father's ideals. Thought he should have stayed here and not gotten involved."

Luke Skywalker: "You fought in the Clone Wars?"

Ben Kenobi: "Yes, I was once a Jedi Knight the same as your father."

(18) There is blunt talk like sword-thrusts, But the speech of the wise is healing. (19) Truthful speech abides forever, A lying tongue for but a moment. (20) Deceit is in the minds of those who plot evil; For those who plan good there is joy. (21) No harm befalls the righteous, But the wicked have their fill of misfortune. (22) Lying speech is an abomination to ad-nai, but those who act faithfully please Him. (23) A clever man conceals what he knows, but the mind of dullards cries out folly.

§ The Sages taught: How does one dance before the bride?

"The bride as she is, emphasizing her good qualities."

And Beit Hillel say: "A fair and attractive bride."

Beit Shammai said to Beit Hillel: "In a case where the bride was lame or blind, does one say with regard to her: A fair and attractive bride? But the Torah states: 'Keep you from a false matter' (Exodus 23:7)."

From here the Sages said: "A person’s disposition should always be empathetic with mankind."

Rabban Shimon ben Gamliel used to say: "On three things does the world stand: On justice, on truth, and on peace, As it is said: 'Judge with truth, justice, and peace in your gates' (Zekhariah 8.16)."

Rabbi Ile’a said from the name of Rabbi Elazar, son of Rabbi Shimon: "It is permitted for a person to depart from the truth in a matter that will bring peace, as it is stated: 'Your father commanded before he died, saying: So you shall say to Joseph: Please pardon your brothers’ crime, etc.' (Genesis 50:16–17)."

Rabbi Natan says: "It is a mitzva to depart from the truth in order to preserve peace, as it is stated: 'And Samuel said: How can I go, and Saul will hear and kill me' (I Samuel 16:2)."

Luke looks downward sadly, shaking his head back and forth, as the princess smiles comfortingly at him.

Princess Leia: "There wasn't anything you could have done."

Rabbi Yoḥanan said: "Consolers are not permitted to speak words until the mourner opens and speaks first, as it is stated: 'And they sat down with him upon the ground for seven days and seven nights, and none spoke a word to him; for they saw that his suffering was very great. After this Job opened his mouth' (Job 2:13–3:1), and afterward: 'And Eliphaz the Temanite answered and said' (Job 4:1)." 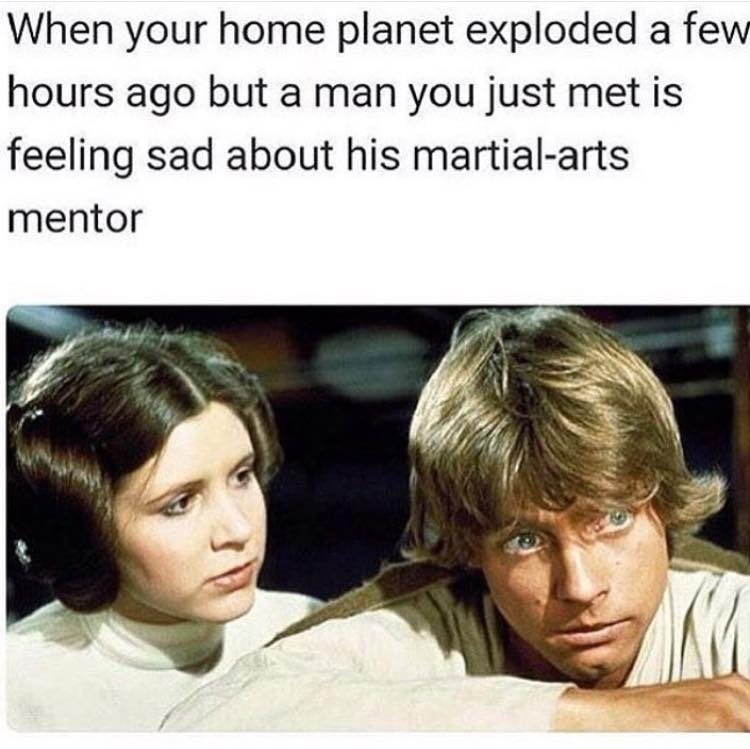 Suddenly the slimy alien disappears in a blinding flash of light. Han pulls his smoking gun from beneath the table as the other patron look on in bemused amazement. Han gets up and starts out of the cantina, flipping the bartender some coins as he leaves.

Han Solo: "Sorry about the mess."

The Sages taught in a baraita: The verse states: “If a burglar is found breaking in, and is smitten and dies, there shall not be blood shed on his account. If the sun is risen upon him, there shall be blood shed on his account” (Exodus 22:1–2) - But did the sun rise only upon him? Rather, If the matter is as clear to you as the sun that the burglar is not coming to you in peace, but rather his intention is to kill you, arise and kill him first.

But if you are not sure about his intentions, do not kill him.

The Sages taught: From where that with regard to one who pursues another to kill him, may be saved at life?
You learn to say [from the verse]: “You shall not stand idly by the blood of another” (Leviticus 19:16).

It was taught: From where is it derived that one who sees another drowning in a river, or being dragged away by a wild animal, or being attacked by bandits [listin], is obligated to save him?

You learn to say [from the verse]: "You shall not stand idly by the blood of another.”