"In the winter of '67 I was approached by Gil Aldema of The Voice of Israel. Teddy Kollek (the mayor at the time) had asked him to commission a song about Jerusalem. For many years, the Voice of Israel held a song competition on Independence Day, until then broadcast on the radio only (because we only got television in 1968). That same year, 1967, they elected, on a one-time basis to also commission songs from five professional composers, I among them. I found it very difficult to write the song, until I recalled the legend about Rabbi Akiva promising his wife Rachel a "city of gold," i.e. a piece of gold jewelry depicting Jerusalem. I chose Shuli Nathan to perform the song. She was a 20-year old soldier-teacher, with a guitar and a voice like bells. The song was a hit from the very first performance and, at midnight, when Shuli was asked to return to the stage, the audience was already singing along on the chorus... "

The mountain air is clear as wine

And the scent of pines

Is carried on the breeze of twilight

With the sound of bells.

And in the slumber of tree and stone

Captured in her dream

The city that sits solitary

And in its midst is a wall.

Alas! Lonely sits the city Once great with people! She that was great among nations Is become like a widow; The princess among states Is become a thrall.

Read the words of the chorus and answer the questions.

Jerusalem of gold, of bronze and of light

Behold I am a harp for all of your songs.

Cause a new light to shine upon Zion, and may we all be worthy soon to enjoy its brightness.

Rabbi Akiva became betrothed to the daughter of Kalba Savua. When Kalba Savua heard about their betrothal, he took a vow prohibiting her from eating from his property. Despite this, she went ahead and married him. In the winter they would sleep in a storehouse of straw, and he [Rabbi Akiva] would gather strands of straw from her hair. He said to her: If I had the means I would present you with a Jerusalem of Gold.

Zion, do you ask if the captives are at peace --

the few who are left?

I cry out like the jackals when I think of their grief;

but, dreaming of the end of their captivity,

Read the words of the second verse and answer the questions below.

How the cisterns have dried

The marketplace is empty

And no one frequents the Temple Mount

In the Old City.

And in the caves in the mountain

And no one descends to the Dead Sea

By way of Jericho.

(1) Alas! Lonely sits the city Once great with people! She that was great among nations Is become like a widow; The princess among states Is become a thrall.

(21) Alas, she has become a harlot, The faithful city That was filled with justice, Where righteousness dwelt— But now murderers.

Read the words of the third verse and answer the questions below.

But as I come to sing to you today

And to adorn crowns to you

I am the smallest of the youngest of your children

And of the last poet.

For your name scorches the lips

If I forget thee, Jerusalem

Which is all gold.

Rav Yehuda says that Rav says: When Moses ascended on High, he found the Holy One, Blessed be He, sitting and tying crowns on the letters [of the Torah]. Moses said before God: Master of the Universe, who is preventing You [from giving the Torah without these additions?] God said to him: There is a man who is destined to be born after several generations, and Akiva ben Yosef is his name; he is destined to derive from each and every thorn [of these crowns] mounds upon mounds of halakhot [Jewish Law].

(11) Then Samuel asked Jesse, “Are these all the boys you have?” He replied, “There is still the youngest; he is tending the flock.” And Samuel said to Jesse, “Send someone to bring him, for we will not sit down to eat until he gets here.” (12) So they sent and brought him. He was ruddy-cheeked, bright-eyed, and handsome. And the LORD said, “Rise and anoint him, for this is the one.” (13) Samuel took the horn of oil and anointed him in the presence of his brothers; and the spirit of the LORD gripped David from that day on. Samuel then set out for Ramah.

If I forget you, O Jerusalem, let my right hand wither; let my tongue stick to my palate if I cease to think of you, if I do not keep Jerusalem in memory even at my happiest hour.

In his article about Yerushalayim Shel Zahav, Ofir Ben Yair asks the question: why does Rabbi
Akiva feature so prominently in Naomi Shemer’s song?

See below for the midrash that Ben Yair refers to in his answer and answer the following
questions.

Again it happened that Rabban Gamliel, Rabbi Elazar ben Azaria, Rabbi Joshua, and Rabbi Akiva went up to Jerusalem. When they reached Mount Scopus, they tore their garments. When they reached the Temple Mount, they saw a fox emerging from the place of the Holy of Holies. The others started weeping; Rabbi Akiva laughed.

Said they said to him: Why are you laughing?

Said he to them: Why are you weeping?

Said they said to him: A place [so holy] that it is said of it: “the stranger that approaches it shall die”, and now foxes walk in it; and we shouldn't weep?

The last verse of the song was added after the Six-Day War. Naomi Shemer explained:
“At that point [when the song was first performed ] we were moving toward war, and three
weeks later, when the paratroopers liberated the Western Wall, they had an anthem at the
ready. On that day, June 7, 1967, I added a fourth verse to the song in honour of the victory.”

Jerusalem of Gold (Yerushalayim Shel Zahav), 1967 from the collection of the National Library of Israel 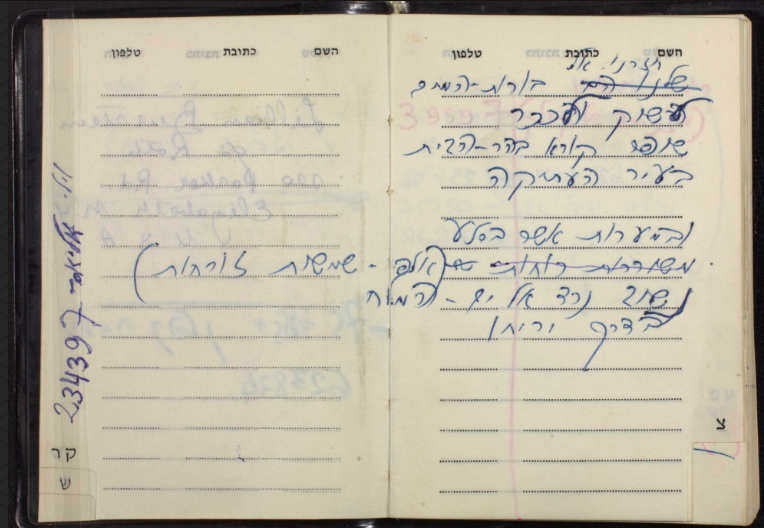 Read the fourth verse and answer the questions with reference to the pictures
below.

We have returned to the cisterns

A shofar calls out on the Temple Mount

In the Old City.

And in the caves in the mountain

We will once again descend to the Dead Sea

By way of Jericho!

Photograph 1 – The Border in Jerusalem 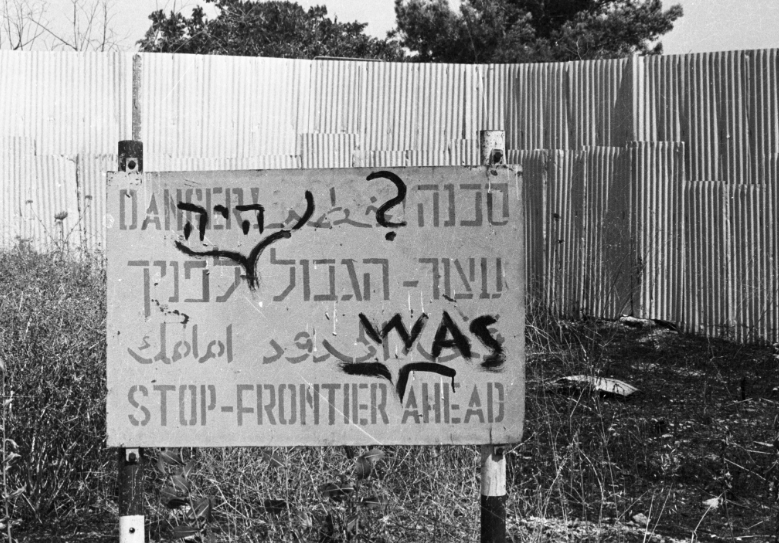 After the capture of the Old City, IDF Chief Rabbi Shlomo Goren blew the shofar at the Kotel.

In the days immediately following the Six-Day War, the photographer Dan Hadani took moving photographs of the changes that were taking place in Jerusalem. Thousands of Israelis came to Jerusalem to visit the Kotel and parts of the city that had been previously denied to them. The city of Jerusalem prepared for the large numbers of visitors by expanding the plaza in front of the Kotel.

From the video, "100 Years in the Western Wall", from the National Library of Israel 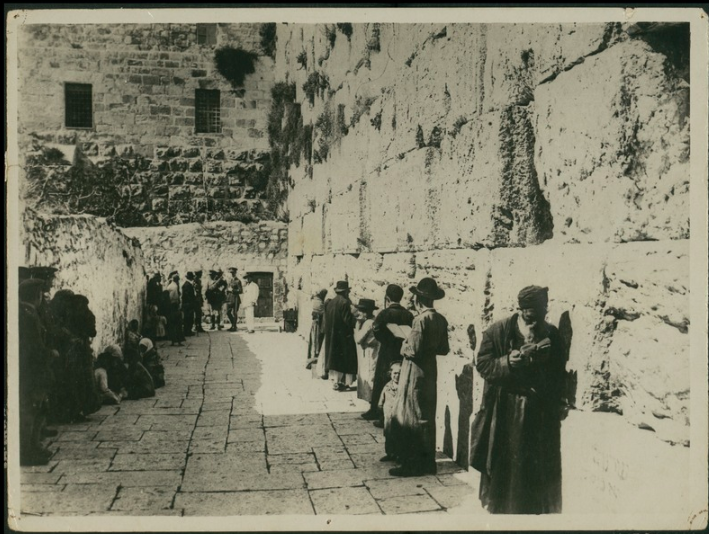 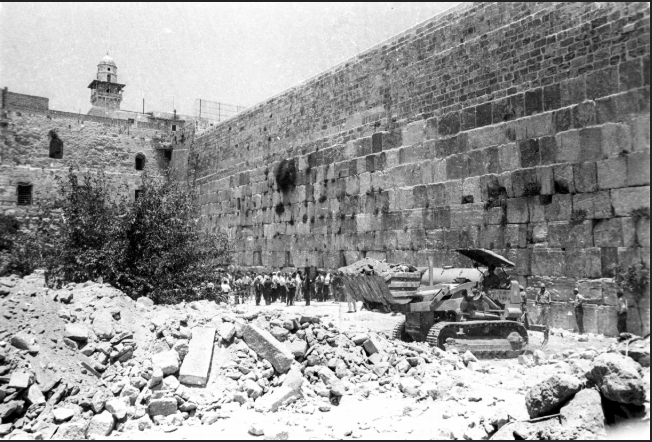 The First Days After the 6-Day War 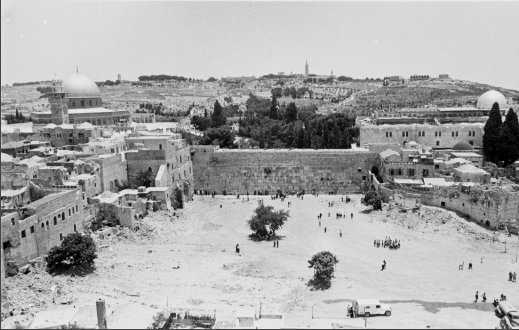 Photograph 5 – Returning to the Kotel

Israelis from all backgrounds came to Jerusalem to pray at the Kotel. 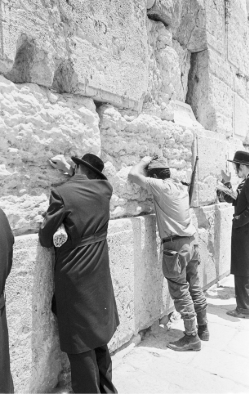 Ask them how they felt when they heard that Jerusalem had been reunified.
Ask them what they feel now and felt then about the song.