The Greatest Teacher, Failure Is
TP 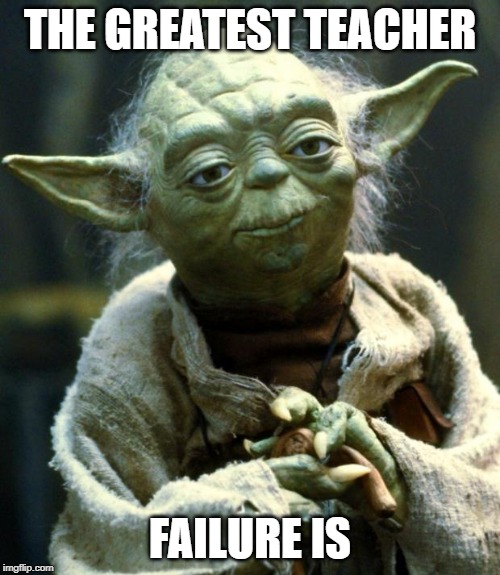 The Sages taught in a baraita: There were four people who died only because of the counsel of the primordial snake, in the wake of which all of humanity became mortal, and not on account of any personal sin. And they are: Benjamin, son of Jacob; Amram, father of Moses; Yishai, father of David; and Chileab, son of David.

Proverbs 24:16
(16) Seven times the righteous man falls and gets up, While the wicked are tripped by one misfortune.
4ד
פרי צדיק, נצבים א׳:א׳

But Israel falls and stands as it says, "Do not rejoice over me, Oh my enemy! Though I have fallen, I rise again." This is that through the act of falling this is the reason that one rises.

This is the language of Chazal, "Downward motion for the sake of upward motion." That through the descent one can reach an even greater ascent.

Likewise it says, "Seven times the righteous man falls and gets up." That specifically through falling, he is able to get up. (Translation my own.)

This letter was written by R’ Yitzchak Hutner z”l (1904-1980; Rosh Yeshiva of Mesivta Chaim Berlin in Brooklyn) in response to a former student. The correspondent apparently had bemoaned the fact that he faced spiritual struggles; as quoted by R’ Hutner, he had written: “I will never forget the desire that I once had to succeed and to climb ‘from strength to strength,’ but now, my hope is lost.” The letter is found in Pachad Yitzchak: Igrot U’ketavim No. 128.

Your letter reached my hand, and your words touched my heart. Know, my friend, that your very letter belies the descriptions that it contains. Now, let me explain this statement.

It is a terrible problem that when we discuss the greatness of our gedolim, we actually deal only with the end of their stories. We tell about their perfection, but we omit any mention of the inner battles which raged in their souls. The impression one gets is that they were created with their full stature.

For example, everyone is impressed by the purity of the Chafetz Chaim’s speech. [Ed. Note: The Chafetz Chaim led the battle against lashon hara and is held up as the model of how a Jew should speak.] However, who knows about all the wars, the battles, the impediments, the downfalls, and the retreats that the Chafetz Chaim experienced in his fight with the evil inclination?!

As a result [of this gap in our knowledge of gedolim], when a young man who is imbued with a [holy] spirit and with ambition experiences impediments and downfalls, he believes that he is not planted in the house of Hashem. This is because this young man thinks that being planted in Hashem’s house means experiencing tranquility of the soul “in lush meadows beside tranquil waters” [Tehilim 23:2].

However, know my friend, that the key for your soul is not the tranquility of the yetzer hatov, but the war against the yetzer hara. Your letter testifies that you are a faithful warrior in the army of the yetzer hatov. There is a saying in English, “Lose the battle and win the war.” You surely have stumbled and will stumble again, and you will be vanquished in many battles. However, I promise you that after you have lost those battles, you will emerge from the war with a victor’s wreath on your head.

The wisest of all men [King Shlomo] said [Mishlei 24:16], “The tzaddik will fall seven times and will rise.” The unlearned think that this means, “Even though a tzaddik falls seven times, he will rise.” The wise know well that the meaning is: “Because a tzaddik falls seven times, he will rise.” On the verse [Bereishit 1:31], “And Elokim saw all that He had made and it was very good,” the midrash comments, “‘Good’ refers to the yetzer hatov; ‘Very good’ refers to the yetzer hara.” [In line with this midrash, R’ Hutner continues:] If you had written to me of your mitzvot and good deeds, I would have said that it was a good letter. Now that you tell me of your falls and stumbles, I say that I have received a very good letter. Please, don’t picture to yourself that a gadol and his yetzer hatov are one and the same; rather, imagine the gedolim at war with all types of base tendencies . . .

I have seen fit to write these words to you so that you can refer to them from time to time. Regarding specific details, it is preferable to speak face-to-face.

You are one who is planted in Hashem’s house!

Sharing in your suffering,
Confident that you will prevail,
Praying for your success,
[Signed] Yitzchak Hutner.

One of my favorite [biblical] stories is... the story of Joseph, who was sold into slavery in Egypt by his brothers at the age of 17. Can you imagine how easy it would have been for him to languish in self-pity as a servant of Potiphar, to focus on the weaknesses of his brothers and his captors and on all he didn't have? But Joseph was proactive. He worked on be. And within a short period of time, he was running Potiphar's household. He was in charge of all that Potiphar had because the trust was so high.

Then the day came when Joseph was caught in a difficult situation and refused to compromise his integrity. As a result, he was unjustly imprisoned for 13 years. But again he was proactive. He worked on the inner circle, on being instead of having, and soon he was running the prison and eventually the entire nation of Egypt, second only to the Pharaoh.

I know this idea is a dramatic Paradigm Shift for many people. It is so much easier to blame other people, conditioning, or conditions for our own stagnant situation. But we are responsible - "response-able" - to control our lives and to powerfully influence our circumstances by working on be, on what we are.

The best projects push up against the persistence of reality. What is a B+ poem or musical composition? How does an engineering project earn an 87? Most mindful work succeeds or fails. Students will want to do the best job possible when they care about their work and know that you put them ahead of a grade.