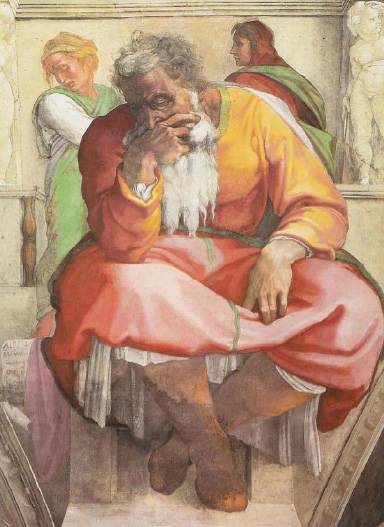 Jeremiah's prophecies against Babylonia in chapters 50 and 51--part of his oracles against the nations--are integral to his prophetic message. What do these prophecies teach us about Jeremiah and about prophecy in Israel in general?

In this class, we will focus on passages from Chapter 51.

The Ishtar Gate of Babylon 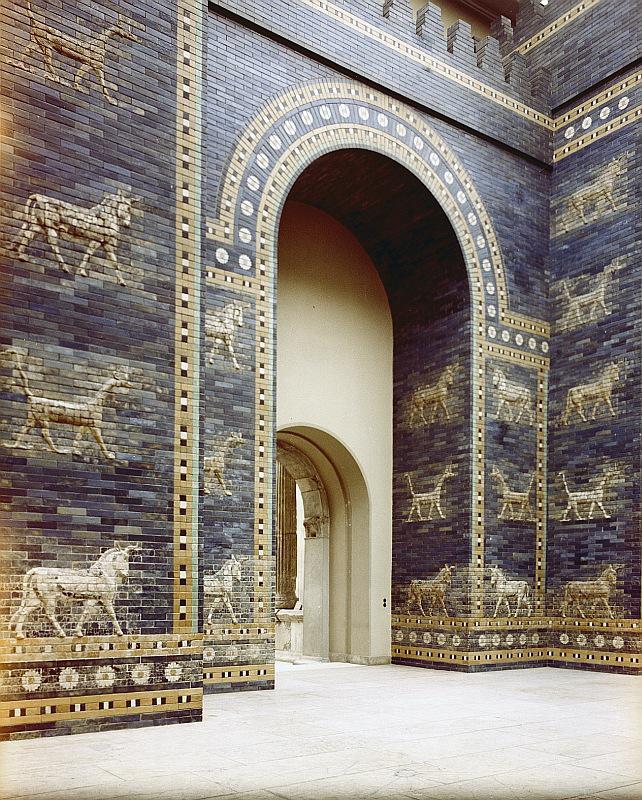 The Ishtar Gate (Arabic: بوابة عشتار‎) was the eighth gate to the inner city of Babylon[citation needed] (in the area of present-day Hillah, Babil Governorate, Iraq). It was constructed in about 575 BCE by order of King Nebuchadnezzar II on the north side of the city. It was part of a grand walled processional way leading into the city. https://en.wikipedia.org/wiki/Ishtar_Gate Visited 11/2021 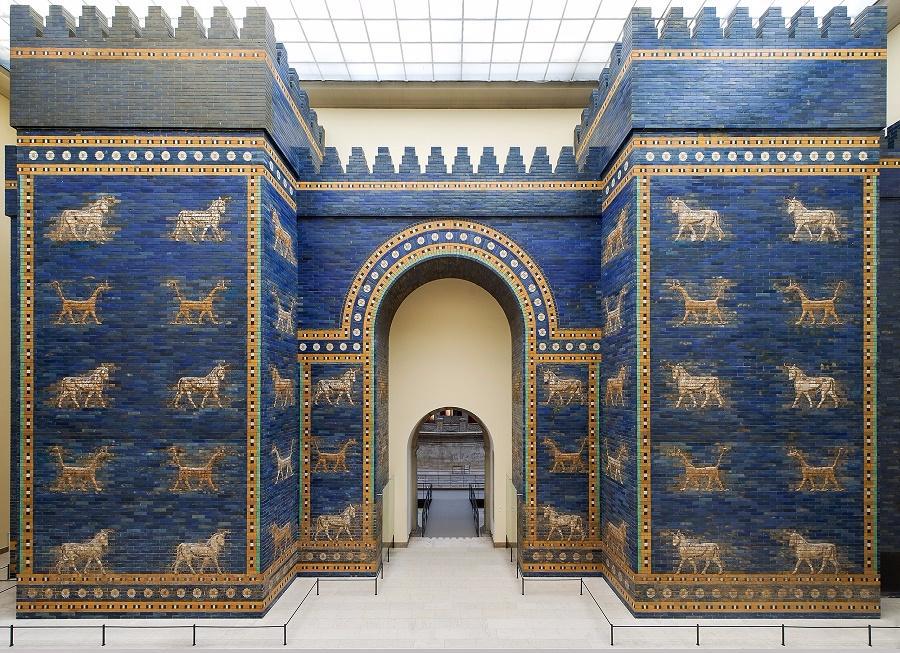 and in Israelite prophecy in general

The Nations - relevant chapter - number of verses per nation 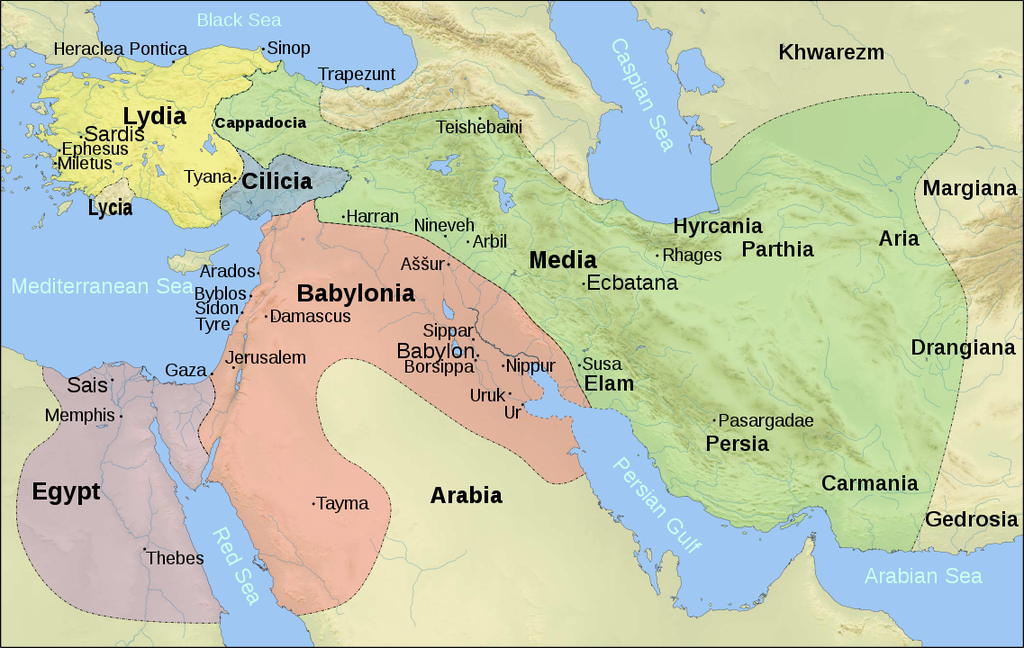 "Approximate borders of the Neo-Babylonian Empire (red) and neighboring states in the 6th century BC." Found at https://en.wikipedia.org/wiki/Neo-Babylonian_Empire#Administration_and_extent, visited 11/2021

...early Israelite prophecy and prophecy from elsewhere in the ANE [=Ancient Near East] included oracles against enemy nations, which means the Foreign Nation Oracles, beginning with Amos and continuing through to Jeremiah and Ezekiel, must be placed in a larger context. According to J. H. Hayes, Foreign Nation Oracles originated in contexts of war. Within Israel, war oracles against other nations are heard from Samuel, men of God prophesying to [King] Ahab [of Israel], and [the prophet] Elisha. Later come foreign nation oracles from Amos, Isaiah, Jeremiah, Ezekiel, and other prophets... (p. 182)

...as 25:15-29 makes clear, judgment comes first to Jerusalem and the cities of Judah; then to the nations round about. The main point then in the present oracles is that [the Lord], at the end of the day, is Lord and Judge of all nations. (p. 183)

(1) The “Babylon” Pronouncement, a prophecy of Isaiah son of Amoz. (2) “Raise a standard upon a bare hill,
Cry aloud to them;
Wave a hand, and let them enter
The gates of the nobles! (3) I have summoned My purified guests
To execute My wrath;
Behold, I have called My stalwarts,
My proudly exultant ones.”
(4) Hark! a tumult on the mountains—
As of a mighty force;
Hark! an uproar of kingdoms,
Nations assembling!
The LORD of Hosts is mustering
A host for war. (5) They come from a distant land,
From the end of the sky—
The LORD with the weapons of His wrath—
To ravage all the earth!
(6) Howl!
For the day of the LORD is near;
It shall come like havoc from Shaddai.

(1) The word which the LORD spoke concerning Babylon, the land of the Chaldeans, through the prophet Jeremiah: (2) Declare among the nations, and proclaim;
Raise a standard, proclaim;
Hide nothing! Say:
Babylon is captured,
Bel is shamed,
Merodach is dismayed.
Her idols are shamed,
Her fetishes dismayed. (3) For a nation from the north has attacked her,
It will make her land a desolation.
No one shall dwell in it,
Both man and beast shall wander away.

Jeremiah 50:29-30
(29) Summon archers against Babylon,
All who draw the bow!
Encamp against her round about,
Let none of her people escape.
Pay her back for her actions,
Do to her just what she has done;
For she has acted insolently against the LORD,
The Holy One of Israel. (30) Assuredly, her young men shall fall in her squares,
And all her warriors shall perish in that day
—declares the LORD.

The Placement of the Foreign Nation Oracles

in Jeremiah and in related prophets

In our text (MT = Masoretic Text): almost at the very end of the book

In the Septuagint: right after chapter 25 verse 15 part a!

2. Our Text: Passages from Chapter 51

(1) Thus said the LORD:
See, I am rousing a destructive wind
Against Babylon and the inhabitants of Leb-kamai. (2) I will send strangers against Babylon, and they shall winnow her.
And they shall strip her land bare;
They shall beset her on all sides
On the day of disaster. (3) Let the archer draw his bow,
And let him stand ready in his coat of mail!
Show no pity to her young men,
Wipe out all her host! (4) Let them fall slain in the land of Chaldea,
Pierced through in her streets.
(5) For Israel and Judah were not bereft
Of their God the LORD of Hosts,
But their land was filled with guilt
Before the Holy One of Israel.

The poem of the war club

Note: Radak (Rabbi David Kimchi) identifies the 'war club' in verse 20 as the King of Babylon.

Punishment of the mountain

(24) But I will requite Babylon and all the inhabitants of Chaldea
For all the wicked things they did to Zion before your eyes
—declares the LORD.

(25) See, I will deal with you, O mountain of the destroyer
—declares the LORD—
Destroyer of the whole earth!
I will stretch out My hand against you
And roll you down from the crags,
And make you a burnt-out mountain. (26) They shall never take from you
A cornerstone or foundation stone;
You shall be a desolation for all time
—declares the LORD.

(34) “Nebuchadrezzar king of Babylon
Devoured me and discomfited me;
He swallowed me like a dragon,
He filled his belly with my dainties,
And set me down like an empty dish;
Then he rinsed me out.-e (35) Let the violence done me and my kindred
Be upon Babylon,”
Says the inhabitant of Zion;
“And let my blood be upon the inhabitants of Chaldea,”
Says Jerusalem.

(59) The instructions that the prophet Jeremiah gave to Seraiah son of Neriah son of Mahseiah, when the latter went with [or at the bidding of] King Zedekiah of Judah to Babylonia, in the fourth year of [Zedekiah’s] reign [=594/3 BCE]. Seraiah was quartermaster. (60) Jeremiah wrote down in one scroll all the disaster that would come upon Babylon, all these things that are written concerning Babylon. (61) And Jeremiah said to Seraiah, “When you get to Babylon, see that you read out all these words. (62) And say, ‘O LORD, You Yourself have declared concerning this place that it shall be cut off, without inhabitant, man or beast; that it shall be a desolation for all time.’ (63) And when you finish reading this scroll, tie a stone to it and hurl it into the Euphrates. (64) And say, ‘Thus shall Babylon sink and never rise again, because of the disaster that I will bring upon it. And [nations] shall have wearied themselves [for fire].’”
Thus far the words of Jeremiah.

Reinhold Niebuhr said many years ago:

In prophetic religion there is a more genuine dialectic in which the movements of history are in one moment the instruments of God and in the next come under his condemnation. Thus Babylon and the king of the Medes are regarded by the prophets as the instruments of vengeance in God's hands. But that does not mean that they are better than others and that they will not be cut down in time. They pronounce doom upon Babylon as well as upon Israel. (quoted in Jack R. Lundbom, Jeremiah 37-52 p 366)

These [chapters] were compiled over time, but before the bloodless fall of the Neo-Babylonian empire to the Persians by 539 BCE, which contradicts the bloody fall of Babylonia predicted throughout.

Compare to end of verse 64: