Stolen Blessings and the Crooked Timber of Humanity
GS

The association of Jacob – Yaakov with a heel is strange. Jacob is not the only mythical hero with a famous heel, but in Achilles case, he was the owner of the heel. Jacob’s relationship with his brother’s heel is vicarious. If the biblical author, let alone his parents, want to be flattering, they do a lousy job. Jacob is to be known, at best, as a “hanger on”. Fox’s translation: "Heel-Holder"

Even if we choose to think of Jacob as a bootstrapper, we can’t forget that he pulls himself up by a bootstrap attached to his brothers heal. And let’s not forget that Esau’s heal, like Achilles, is his most vulnerable body part. Metaphorically, the heel is the exposed rear of an army (see Joshua 8:13 and Genesis 49:19). When God curses the snake for tempting Eve, it is on the snake's metaphorical heel that man shall forever stamp (Genesis 3:15). Attacking an enemy’s heel is an insult to both the attacker and the victim. 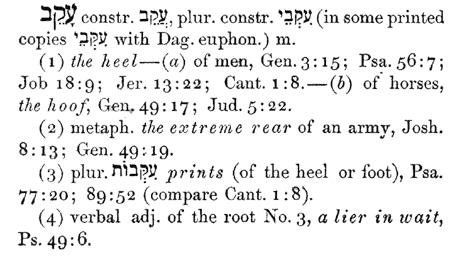 (13) Thus the main body of the army was disposed on the north of the city, but the far end of it was on the west. (This was after Joshua had spent the night-a in the valley.)— 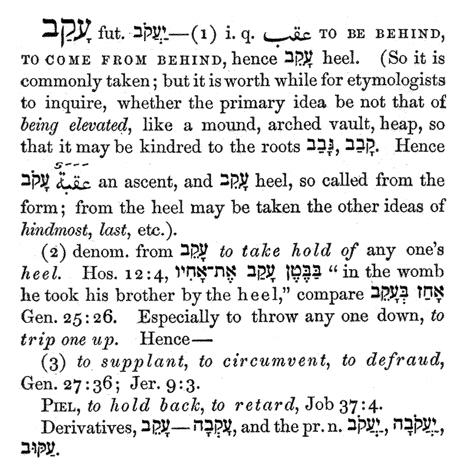 the descendants of Ishmael [i.e., the Bedouin], asking of them:

Will you accept the Torah?

They asked: What’s written in it?

The very essence of these people, like their father, is banditry.

For it is said:

"Oh, Master, make me chaste and celibate - but not yet!"

GEMARA: The ruling in the mishna is that a stolen lulav is unfit. ....why does one not fulfill his obligation with a stolen lulav?

It is unfit because it is a mitzva that comes to be fulfilled by means of a transgression, which renders the mitzva unfulfilled, as it is stated: “And you have brought that which was stolen and the lame, and the sick; that is how you bring the offering; should I accept this of your hand? says the Lord” (Malachi 1:13). Based on the juxtaposition in the verse, it is derived that the legal status of a stolen animal is equivalent to that of a lame animal. Just as a lame animal, because it is blemished, has no remedy and is unfit for use, so too, a stolen animal has no remedy. There is no difference before the owners reach a state of despair of recovering the stolen animal, and there is no difference after despair. In both cases there is no remedy.

The Gemara elaborates: Granted, before the despair of the owner, the robber may not sacrifice the animal because the animal does not belong to him. The Merciful One says: “When a person sacrifices from yours an offering” (Leviticus 1:2). The term “from yours” indicates that the animal must belong to the one sacrificing it, and this stolen animal is not his. However, after the despair of the owner, didn’t the robber acquire the animal with the despair? Once the owner despairs, the animal belongs to the robber, despite the fact that he incurs a debt that he must repay the owner. Since the animal is legally his, why is it prohibited for the robber to sacrifice it as an offering? Rather, is it not because the offering is a mitzva that comes by means of a transgression? Since the animal came into his possession by means of a transgression, it is unfit for use in fulfilling a mitzva.

And Rabbi Yoḥanan said in the name of Rabbi Shimon ben Yoḥai: What is the meaning of that which is written: “For I the Lord love justice, I hate robbery in a burnt-offering” (Isaiah 61:8)? The Gemara cites a parable of a flesh-and-blood king who was passing by a customs house. He said to his servants: Pay the levy to the taxmen. They said to him: Doesn’t all the tax in its entirety belong to you? If the taxes will ultimately reach the royal treasury, what is the point of paying the levy? He said to them: From my conduct, all travelers will learn and will not evade payment of the tax. So too, the Holy One, Blessed be He, said: “I the Lord... hate robbery in a burnt-offering.” Although the whole world is His and the acquisitions of man have no impact upon Him, God says: From My conduct, My children will learn and distance themselves from robbery, even from robbery unrelated to the needs of offerings.

“Out of the crooked timber of humanity, no straight thing was ever made.”

― Immanuel Kant, Idea for a Universal History with a Cosmopolitan Purpose

(3) Reside in this land, and I will be with you and bless you; I will assign all these lands to you and to your heirs, fulfilling the oath that I swore to your father Abraham. (4) I will make your heirs as numerous as the stars of heaven, and assign to your heirs all these lands, so that all the nations of the earth shall bless themselves by your heirs— (5) inasmuch as Abraham obeyed Me and kept My charge: My commandments, My laws, and My teachings.”

The word translated as “because” or "inasmuch" is “ekev”. Used in this fairly rare sense, it has the sense of “as a consequence, a gain, a reward, end”. It is that which results from a long, tedious, painful, tortuous and circuitous journey. A pilgrimage full of blisters and maybe a touch of plantar fasciitis. Esau, might have been, like Achilles, the golden boy and favorite son and Yaakov, the parasite, but Yaakov struggled with what little he had. Esau may have been well heeled, but Yaakov had the fortitude and faith in a God of history to grab steadfastly for a better future.

(36) [Esau] said, “Was he, then, named Jacob that he might supplant me these two times? First he took away my birthright and now he has taken away my blessing!” And he added, “Have you not reserved a blessing for me?”

Here Ekev-heel is used in the sense of “to throw one down, to trip one up, to supplant, to circumvent, to defraud.[iii] Fox’s translation: "Heel-Sneak".

Jeremiah 9:3
(3) Beware, every man of his friend!
Trust not even a brother!
For every brother takes advantage,
Every friend is base in his dealings.-a

What kind of parents would the biblical author have Isaac and Rebecca be? Who gives a child such a name?

Clearly, Jacob is in need of a name change… and in fact, this is what happens after he wrestles with the Angel at the River Jabbok (literally: wrestling river).

There is nothing flattering that one can say about Yaakov’s name. His name can only portend a change. A change from a swindler, a scrapper, a kniver… someone who by choice or circumstance is forced to steal his blessings and eke out a living and a life. Yaakov is the outsider, the Ghetto Jew, but his name portends another name, where he crosses the river into his homeland and can stand on his own feet and pull himself up from his own bootstraps ... attached to his own heel. This is what hopefully lies ahead for him in his future name and this is what presumably is up for grabs in the blessing that he steals.