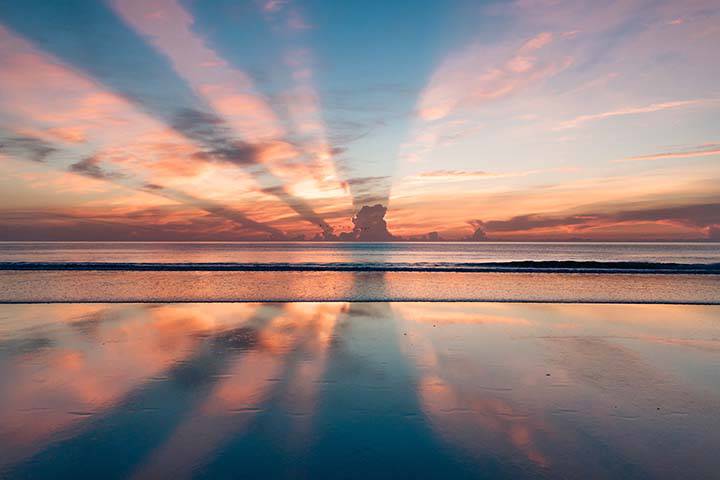 Jacob awoke from his sleep and said, “Surely the LORD is present in this place, and I did not know it!” He was afraid/ in awe, he said, “How awesome/ frightening is this place! This is none other than the abode of God, and that is the gateway to heaven.” Early in the morning, Jacob took the stone that he had put under his head and set it up as a pillar and poured oil on the top of it.

Awe is a way of being in rapport with the mystery of all reality. The awe that we sense or ought to sense when standing in the presence of a human being...Fear is the anticipation and expectation of evil or pain, as contrasted with hope which is the anticipation of good. Awe, on the other hand, is the sense of wonder and humility inspired by the sublime or felt in the presence of mystery. Fear is “a surrender of the succors which reason offers”; awe is the acquisition of insights which the world holds in store for us. Awe, unlike fear, does not make us shrink from the awe-inspiring object, but, on the contrary, draws us near to it. This is why awe is compatible with both love and joy.

Rashi famously suggests that if the Torah is primarily a book of laws—after all, it contains hundreds of laws—then the Five Books of Moses should start with the first law given to the whole people of Israel (Exodus 12:1-2 “This month [Nissan] is the first of the months of the year…” i.e. the commandment for the courts to designate the months of the year and the dates of the holidays). But this verse is preceded by 62 other chapters! And, by Rashi’s logic, if the Torah is primarily the story and history of the Jewish people (on which it focuses most of the time), then the text should start with the story of Abraham, the first Jew. This occurs in the eleventh chapter of Genesis, v. 26 ff.

What then is the Torah telling us about its primary message by beginning with the story of Creation? Why does the Torah begin with the very first moment of existence of the whole world? What does the idea of Creation mean for us?

The Torah is presenting itself as the book of human destiny. It offers a revelation of the meaning of existence and a guide to the mission of humanity to upgrade this world. Chapter 1 of Genesis is not telling us the actual facts of Creation. We know from contemporary physics that there is a process from Big Bang chaos to radiation to matter and the emergence of order through galaxies to stars to planets. In fact, the idyllic portrait the Torah offers in chapter 1 is not how the earth looks initially but how the planet will look when Creation is completed and this globe will be turned into a paradise.

By focusing on the beginning of the world, the Torah intends to reach all of humanity. In its opening it offers the idea of Creation itself. This idea has been one of the most influential Jewish teachings in world civilization. Creation means that this world is not the outcome of a blind and random physical process that has no values or goals and will end in oblivion. Rather it has an intended outcome. “It was not created to be void; it was brought into being to be filled with life” (Isaiah 45:18).

Creation means that there is a shaping Creator, an Infinite Consciousness that knows every one of the endless number of stars (Psalm 147:4) and loves every one of God’s creatures (Psalm 145:9). This Creator is called Elohim in chapter 1—focusing on a high intensity, unlimited energy Power that is capable of creating and sustaining an infinite universe. Despite the incredible variety and conflicting forces in nature, there is only One God or Universal Force. All of reality is unified and governed by a universal natural process. This Jewish teaching of unity in Creation has profoundly shaped religious understanding and scientific thought.

By instructing us to see the world as a Creation of the Ultimate Artist, the Creator, the Torah guides humans to approach life and existence as we would a work of art. We should not glance casually or look routinely. We should seek out patterns of beauty, and connections that enrich the view. We will discover juxtapositions that add depth dimensions that ravish the eye—and the soul. Seeing the world as a created work of art, we instinctively explore: What is the artist’s message to us? What has the artist seen to which she seeks to open our eyes?

Through the lens of Creation, we approach the world with wonder and seek out the “Wow!” factor in every creature and in every human being that we meet. Abraham Joshua Heschel wrote of experiencing radical amazement in encountering the Divine Presence. In other words, religion, prayer—indeed all human experiences and relationships—are not maximized out of logic and proof. They should grow out of emotional encounter and openness to life in all its dimensions.

There is another implication of Creation. This world is good (Genesis 1:31). This mortal life is real—not an illusion, as some other religions would have it. Living this life and repairing this world is an eminently worthwhile pursuit of human beings. Humans are called by God to work this creation and guard it (Genesis 2:15).

The Creation concept also teaches us that, while physical existence is real, that is only the tip of the iceberg. The encounter with the Creator/God makes us realize that there are important dimensions of existence that are not measurable or touchable—yet are as real and important as the visible. The whole internal life of humans—love, emotions, relationships, imagination, creativity—is validated. They exist at one of the various levels of being, built into the Creation. Over the course of history, the encounter with God moves from the external to the internal realm. In our time, we know the Lord through intuition, emotion, relationship, and through plumbing the depths of reality to meet the invisible Deity. If we drill down to that level, we meet the Lord in whom the image of God is rooted and who is present in the depth dimension of life.

Finally, the Torah’s narrative of Creation calls our attention to three rhythms that the Lord has embedded in the unfolding universe. In the Torah’s language, the world is moving, first of all, from chaos (tohu va’vohu) to order (Shabbat), where everything is completed and in its proper place with no clashing natural forces or conflicts between creatures. Second, the world is moving from non-life to life (in each of the first four days there is no presence of life, except vegetation on the third day; on the fifth and sixth days, life explodes). Finally, life is moving and developing from lesser developed forms into far richer, more capable, more evolved forms—from the vegetation on day three (a limited non-mobile form of life), to the fish of the sea on day five, to the birds, climaxing in the human, who is so developed and capable as to be God-like (“You made him only a bit less than a Divine being,” Psalm 8:6). In chapter 1, this third movement is defined as from less to more like God and climaxing in the human who is so advanced as to be in “the image of God” (Genesis 1:27).

The limited human lifespan obscures these truths. We think of ourselves as moving from life to death, from birth to end of life. In our daily pursuits, we perceive our schedule and our desks as going from initial order to growing chaos. The Torah’s Creation account tells us to view life and the world from the divine perspective. Cosmically, the world has moved from the Big Bang’s total chaos to orderly galaxies, stars, and planets. On this planet, viewed from the divine perspective, we have moved from non-life to life in 14 billion years. Then in 1+ billion years there has been a flow and explosion of life in all its forms. The Creation account tells us this so we can see the world sub specie aeternitatis, from the point of view of the infinite. The Torah guides us to identify the three rhythms of creation and join in. Humans should live our lives on the side of (life sustaining) order as against chaos. In all our behaviors, we should be choosing to create and uphold life as against non-life and death. Finally, in unfolding the potential of life—starting with our own—we should act to increase the quality of life in the world, especially of humans, created in the image of God. In so doing, the Torah teaches us that we become partners in Creation.