Achrei Mot -A discussion about the sprinkling of the blood on or before the parochet leading to a fascinating historical journey.
PB

The Paroches was the curtain which separated the Kodesh Kodashim where

the Aron resided, from the Kodesh area, which housed the Shulchan, Menorah, and incense altar.

This is the detail of the Yom Kippur Avoda

The Kohein gadol does sprinkling on the incense altar and on the golden altar and in all he does 43 spinklings.

So a lot of the Sedrah is devoted to the Avodah of the Cohen Gadol on Yom Kippur.

In the actual Sedra you will only see written about sprinkling upon or near the Kaporet. 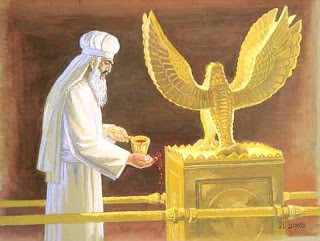 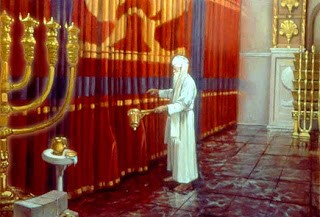 (15) He shall then slaughter the people’s goat of sin offering, bring its blood behind the curtain, and do with its blood as he has done with the blood of the bull: he shall sprinkle it over the cover and in front of the cover.

(1) Which is the place [for the offering] of the sacrifices?Most holy sacrifices are slaughtered on the north [side of the altar]. The bullock and the goat of Yom Kippur are [done] at the north, and the receiving of their blood is [performed] with ministering vessels at the north, and their blood requires sprinkling between the poles [of the ark], on the curtain, and on the golden altar. [The omission of] a single application of [the blood] invalidates [them]. He [the priest] would pour out the remainders of the blood on the western base of the outer altar, but if he did not pour it out, he did not invalidate [the sacrifice].

In the Gemara beginning in Yoma 55a and going on for a few blatt there is a machlokes between the Tannaim about whether the blood was actually sprinkled literally onto the paroches or in front of the paroches.

The Gemara asks: From where are these matters, that the sprinklings do not actually touch the Ark cover, derived? Rav Aḥa bar Ya’akov said that Rabbi Zeira said: The verse states with regard to the goat sacrificed as a sin-offering: “And he shall do with its blood as he did with the blood of the bull, and sprinkle it upon the Ark cover and before the Ark cover” (Leviticus 16:15). The verse should not say downward, i.e., “before the Ark cover,” with regard to the goat, as this is unnecessary; this requirement is derived from the term downward in connection with the bull.

How did R. Alazar ben Yosi merit to see this curtain?

מעילה י״ז ב:ז׳
והיינו דאמר רבי אלעזר בר רבי יוסי אני ראיתיה בעיר [רומי] והוו עליה כמה טיפי דמים
Meilah 17b:7
The Gemara adds: And this is the background for that which Rabbi Elazar bar Rabbi Yosei said (Yoma 57a): I saw the Curtain of the Sanctuary in the city of Rome, and on the Curtain were several drops of blood from the bull and the goat of Yom Kippur. When the emperor took them into his treasury Rabbi Elazar saw the Temple vessels that the Romans had captured when they conquered Jerusalem, including the Curtain.
מעילה י״ז ב:ה׳-ז׳

The Gemara continues the story: As they were journeying, a demon named ben Temalyon emerged to greet them. He said to them: Do you wish that I will join you and come with you in order to help nullify this decree? When he saw that a demon was coming to help save the Jewish people, Rabbi Shimon cried and said: What, even for a maidservant of my father’s home, Hagar the Egyptian, who was Abraham’s handmaid, an angel was made available to appear to her three times to help her. Each of the three mentions of “and the angel of the Lord said unto her” (Genesis 16:9–11) in the story of Hagar is understood as a reference to a different angel. But I apparently do not deserve assistance from an angel even one time, but only help from a demon. In any case, let the miracle come and save the Jewish people, even if only through a demon. The demon ben Temalyon went before them and ascended into the emperor’s daughter and possessed her. When Rabbi Shimon ben Yoḥai arrived there, the emperor’s palace, he said: Ben Temalyon, emerge! Ben Temalyon, emerge! And once Rabbi Shimon called to him, ben Temalyon emerged and left the emperor’s daughter, and she was cured. When the emperor saw that Rabbi Shimon had cured his daughter, he said to them: Ask from me any reward that you want to ask. And he took them up to his treasury to take whatever they wanted. They found that letter there that contained the decrees against the Jewish people, and they took it and tore it up, and thereby nullified the decrees. 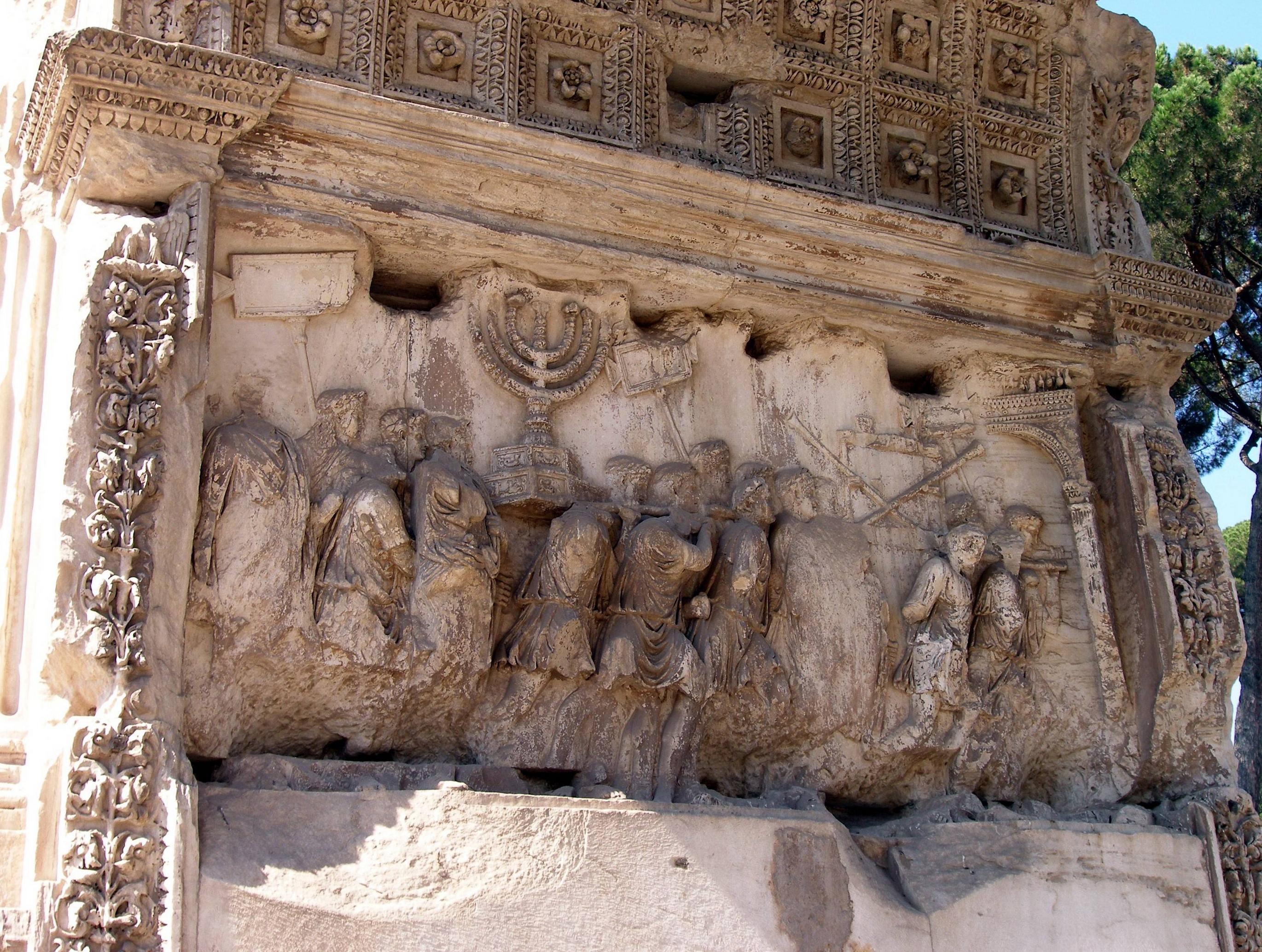 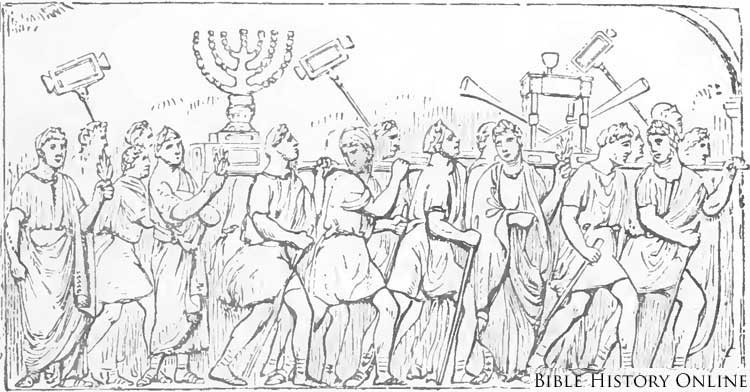 Rabbi Shtrencel who was learning with his chavrusa this gemara about Rabbi Elazar ben Yosi and he was so fascinated by the whole topic that he wrote a letter to the Pope to ask the vatican to return the Kelim of the BM. There are other mentions in shas about Rabbi Elazar ben Rabbi Yosi seeing several objects from the Beis Hamikdash: the Menorah, the shulchan hapanim, the tzitz of the kohen gadol and the paroches. They also found the machteshes (grindstone) of Beis Avtinas.

In fact, Chazal mention having seen the Menorah and other keilim in various other places including Maseches Yoma 57a; Maseches Me’ilah, fourth perek; and Tosefta on Kippurim

2:16. A more detailed description of what Rabbi Elazar ben Rabbi Yosi saw is contained in

Avos D’Rabbi Nasan, perek 41. In Sifrei Zuta, Behaaloscha (Bamidbar 8:2), Rabbi Shimon is quoted as saying, “When I went to Rome, I saw the Menorah there.”

He actually received an answer from the Papal Nuncio denying that the vatican had them. 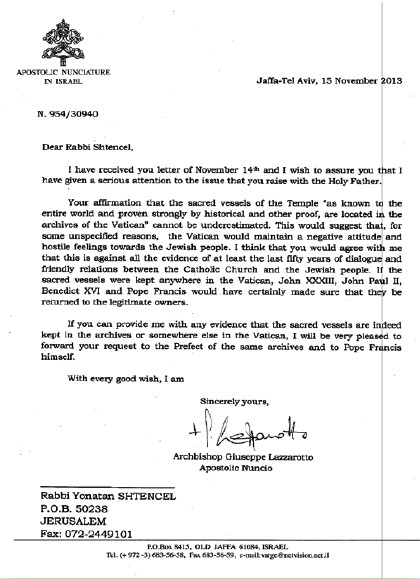 The article goes on to say that the Vatican would definitely not have the keilim because the vatican is in fact a newish invention. It was only around from the year 700CE. The places that the keilim were housed have long been destroyed and pillaged. Also the Vatican has been accused of keeping many Jewish books under lock and key. This is also untrue as most of the manuscripts which it holds are available online for scholarly study.

The Lubliner Rov - Rav Meir Shapira wrote a scholarly article on the "blood on the paroches" machlokes as mentioned above.

He brings another mention of the Paroches in Gittin -

גיטין נ״ו ב:ח׳
אזל שדריה לטיטוס ואמר (דברים לב, לז) אי אלהימו צור חסיו בו זה טיטוס הרשע שחירף וגידף כלפי מעלה
Gittin 56b:8
§ Vespasian went back to Rome and sent Titus in his place. The Gemara cites a verse that was expounded as referring to Titus: “And he shall say: Where is their God, their rock in whom they trusted?” (Deuteronomy 32:37). This is the wicked Titus, who insulted and blasphemed God on High.
גיטין נ״ו ב:ט׳
מה עשה תפש זונה בידו ונכנס לבית קדשי הקדשים והציע ספר תורה ועבר עליה עבירה ונטל סייף וגידר את הפרוכת ונעשה נס והיה דם מבצבץ ויוצא וכסבור הרג את עצמו שנאמר (תהלים עד, ד) שאגו צורריך בקרב מועדיך שמו אותותם אותות
Gittin 56b:9
What did Titus do when he conquered the Temple? He took a prostitute with his hand, and entered the Holy of Holies with her. He then spread out a Torah scroll underneath him and committed a sin, i.e., engaged in sexual intercourse, on it. Afterward he took a sword and cut into the curtain separating between the Sanctuary and the Holy of Holies. And a miracle was performed and blood spurted forth. Seeing the blood, he mistakenly thought that he had killed himself. Here, the term himself is a euphemism for God. Titus saw blood issuing forth from the curtain in God’s meeting place, the Temple, and he took it as a sign that he had succeeded in killing God Himself. As it is stated: “Your enemies roar in the midst of Your meeting place; they have set up their own signs for signs” (Psalms 74:4).
רש"י על גיטין נ״ו ב:ט׳:א׳-ג׳

Rav Meir Shapira asks - maybe the blood that was on the Paroches that Rav Elazar ben Yosi saw in Rome was not because of the sprinklings of the Kohein gadol on Yom Kippur but because of the blood that came out when Titus ran it through with a sword and a miracle occured. The destruction had taken place and this occurrence with Titus had taken place and then the Parochet was taken to Rome when it was seen by Rav Elazar ben Yosi.

So Rabbi Elazar ben Yosi saying that he saw blood on the parochet is not necessarily a proof that they sprinkled blood on the curtain.

Also we can ask why should a miracle be performed for this Rosho ?

Why should he have the zechus that a special nes would happen for him.

Also the Rosh says on massechet Tamid that they had two Parochot.

If one got dirty or stained they would swap over and put up a new paroches.

Also the Rosh says on massechet Tamid that they had two Parochot.

If one got dirty or stained they would swap over and put up a new paroches.

So how could it be that from Yom Kippur to Tisha B’Av they would have left the Parochet spoiled and tarnished with blood. They would have changed it and put on another one if it had got bloody. This also seems to contradict R, Elazar ben Yosi who holds that the blood was actually sprinkled on the parochet and says his proof was because he saw blood on the curtain in Rome.

Rav Shapira says that in reality it was as Rav Elazar ben Yosi said and that on Kippur the blood was sprinkled directly on the curtain but because of the great holiness of the parochet the curtain would mavlia – absorb the blood completely so that there was no evidence of the blood from the outside at all. That was the nes – this ensured that the parochet was never seen in an undignified state and was able to be seen in all its glory and splendour.

But when Titus HaRosha came and ran it through it lost its nes character and the blood that was held inside it poured out. The nes was not performed for Titus – it was Titus that disrupted and desecrated the sanctity of the nes.

Titus did not know the Lomdus – he thought he had killed clapei ma’aleh.