(10) Jacob left Beer-sheba, and set out for Haran. (11) He came upon a certain place and stopped there for the night, for the sun had set. Taking one of the stones of that place, he put it under his head and lay down in that place. (12) He had a dream; a stairway was set on the ground and its top reached to the sky, and angels of God were going up and down on it. (13) And the LORD was standing beside him and He said, “I am the LORD, the God of your father Abraham and the God of Isaac: the ground on which you are lying I will assign to you and to your offspring. (14) Your descendants shall be as the dust of the earth; you shall spread out to the west and to the east, to the north and to the south. All the families of the earth shall bless themselves by you and your descendants. (15) Remember, I am with you: I will protect you wherever you go and will bring you back to this land. I will not leave you until I have done what I have promised you.” (16) Jacob awoke from his sleep and said, “Surely the LORD is present in this place, and I did not know it!”

(11) Know that the figures employed by prophets are of two kinds: first, where every word which occurs in the simile represents a certain idea; and secondly, where the simile, as a whole, represents a general idea, but has a great many points which have no reference whatever to that idea: they are simply required to give to the simile its proper form and order, or better to conceal the idea: the simile is therefore continued as far as necessary, according to its literal sense. Consider this well.

(12) An example of the first class of prophetic figures is to be found in Genesis:--"And, behold, a ladder set up on the earth, and the top of it reached to heaven; and, behold, the angels of God ascending and descending on it" (Gen. 28:12). The word "ladder" refers to one idea: "set up on the earth" to another: "and the top of it reached to heaven" to a third: "angels of God" to a fourth: "ascending" to a fifth; "descending" to a sixth; "the Lord stood above it" (ver. 13) to a seventh. Every word in this figure introduces a fresh element into the idea represented by the figure.

Guide for the Perplexed, Part 1 15

(1) ALTHOUGH the two roots naẓab and yaẓab are distinct, yet their meaning is, as you know, identical in all their various forms.

(3) Whenever this term is applied to God it must be understood in the latter sense, as, "And, behold, the Lord stood (niẓẓab) upon it" (Gen. 28:13), i.e., appeared as eternal and everlasting "upon it," namely, upon the ladder, the upper end of which reached to heaven, while the lower end touched the earth. This ladder all may climb up who wish to do so, and they must ultimately attain to a knowledge of Him who is above the summit of the ladder, because He remains upon it permanently. It must be well understood that the term "upon it" is employed by me in harmony with this metaphor. "Angels of God" who were going up represent the prophets. That the term "angel" was applied to prophets may clearly be seen in the following passages: "He sent an angel" (Num. 20:16); "And an angel of the Lord came up from Gilgal to Bochim" (Judges 2:1). How suggestive, too, is the expression "ascending and descending on it"! The ascent is mentioned before the descent, inasmuch as the "ascending" and arriving at a certain height of the ladder precedes the "descending," i.e., the application of the knowledge acquired in the ascent for the training and instruction of mankind. This application is termed "descent," in accordance with our explanation of the term yarad (chapter x.).

(4) To return to our subject. The phrase "stood upon it" indicates the permanence and constancy of God, and does not imply the idea of physical position. This is also the sense of the phrase "Thou shalt stand upon the rock" (Exod. 33:21). It is therefore clear that niẓẓab and ‘amad are identical in this figurative signification. Comp. "Behold, I will stand (‘omed) before thee there upon the rock in Horeb" (Exod. 17:6).

Guide for the Perplexed, Part 2 10

(2) The arrangement of the Universe may therefore be assumed to be as follows: there are four spheres, four elements set in motion by them, and also four principal properties which earthly beings derive from them, as has been stated above. Furthermore, there are four causes of the motion of every sphere, namely, the following four essential elements in the sphere; its spherical shape, its soul, its intellect, by which the sphere is capable of forming ideas, and the Intelligence, which the sphere desires to imitate. Note this well. The explanation of what I said is this: the sphere could not have been continuously in motion, had it not this peculiar form; continuity of motion is only possible when the motion is circular. Rectilinear motion, even if frequently repeated in the same moment, cannot be continuous: for when a body moves successively in two opposite directions, it must pass through a moment of rest, as has been demonstrated in its proper place. The necessity of a continuous motion constantly repeated in the same path implies the necessity of a circular form. The spheres must have a soul; for only animate beings can move freely. There must be some cause for the motion, and as it does not consist in the fear of that which is injurious, or the desire of that which is profitable, it must be found in the notion which the spheres form of a certain being, and in the desire to approach that being. This formation of a notion demands, in the first place, that the spheres possess intellect; it demands further that something exists which corresponds to that notion, and which the spheres desire to approach. These are the four causes of the motion of the spheres. The following are the four principal forces directly derived from the spheres: the nature of minerals, the properties peculiar to plants, the animal faculties, and the intellect. An examination of these forces shows that they have two functions, namely, to produce things and to perpetuate them; that is to say, to preserve the species perpetually, and the individuals in each species for a certain time. These are also the functions ascribed to Nature, which is said to be wise, to govern the Universe, to provide, as it were, by plan for the production of living beings, and to provide also for their preservation and perpetuation. Nature creates formative faculties, which are the cause of the production of living beings, and nutritive faculties as the source of their temporal existence and preservation. It may be that by Nature the Divine Will is meant, which is the origin of these two kinds of faculties through the medium of the spheres.

(3) As to the number four, it is strange, and demands our attention. In Midrash Tanḥuma the following passage occurs: "How many steps were in Jacob's ladder?--Four." The question refers to the verse, "And behold a ladder set upon the earth," etc. (Gen. 28:12). In all the Midrashim it is stated that there were four hosts of angels: this statement is frequently repeated. Some read in the above passage: "How many steps were in the ladder?--Seven." But all readings and all Midrashim unanimously express that the angels whom Jacob saw ascending the ladder, and descending, were only four; two of whom were going up and two coming down. These four angels, the two that went up and the two that came down, occupied one step of the ladder, standing in one line. Hence it has been inferred that the breadth of the ladder in this vision was four-thirds of the world. For the breadth of an angel in a prophetic vision is equal to one-third of the world; comp. "And his body was like tarshish (two-sixths)" (Dan. 10:6); the four angels therefore occupied four-thirds of the world.--Zechariah, in describing the allegorical vision of "the four chariots that came out from between two mountains, which mountains were mountains of brass" (Zech. 6:1), adds the explanation, "These are the four spirits of the heavens which go forth from standing before the Lord of all the earth" (ibid. ver. 5). By these four spirits the causes are meant which produce all changes in the Universe. The term "brass" (neḥoshet), employed here, and the phrase "burnished brass" (neḥoshet kalal), used by Ezekiel (i. 7), are to some extent homonymous, and will be discussed further on.

(4) The saying of our Sages, that the angel is as broad as the third part of the Universe, or, in the words of Bereshit Rabba (chap. x.), that the angel is the third part of the world, is quite clear; we have already explained it in our large work on the Holy Law. The whole creation consists of three parts, (1) the pure intelligences, or angels; (2) the bodies of the spheres; and (3) the materia prima, or the bodies which are below the spheres, and are subject to constant change.

(5) In this manner may those understand the dark sayings of the prophets who desire to understand them, who awake from the sleep of forgetfulness, deliver themselves from the sea of ignorance, and raise themselves upward nearer the higher beings. But those who prefer to swim in the waters of their ignorance, and to "go down very low," need not exert the body or heart; they need only cease to move, and they will go down by the law of nature. Note and consider well all we have said.

Mishneh Torah, Foundations of the Torah 7:3

(3) The matters concerning which a prophet is informed by vision of prophecy, are imparted to him allegorically, but the interpretation thereof is engraved upon his heart simultaneously with the vision and he knows what it means, as the vision of the ladder which Jacob our father saw: "The angels of God were ascending and descending upon it" (Gen. 28.12); which was a parable, the interpretation of which is the rise and fall of kingdoms, or as the Living Creatures which Ezekiel saw (Ezek. 1. 1–27), or the Seething Pot and the Almond Rod which Jeremiah saw (Jer. 1.12–13), or the Scroll of Parchment which Ezekiel saw (Ezek. 2.9), or the Measure which Zechariah saw (Zech. 2.5). And so with the rest of the prophets; some of them relate the parable and its interpretation as these; others relate the interpretation alone; and still others relate the parable only without the interpretation, as parts of the prophecies of Ezekiel and Zechariah, but all of them are prophesying in parables and metaphors.

(1) Angels … were ascending and descending. Yaakov was afraid that he had sinned in taking the blessings, but Hashem showed him that heaven approved and that the prayers and offerings of his offspring would ascend to heaven from this spot. 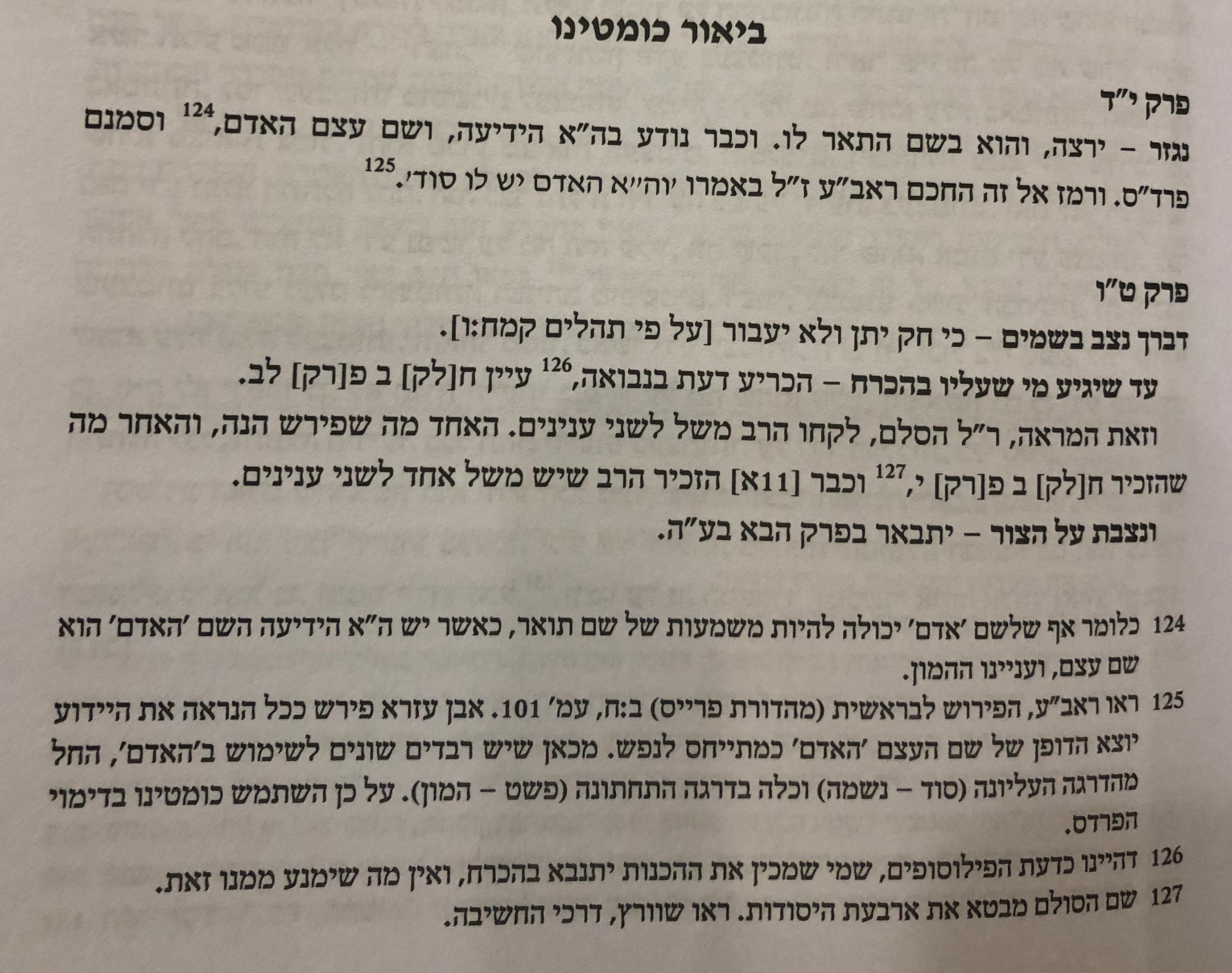