In the Haggadah, Rabban Gamliel tells us that we must feel as if we, ourselves, were taken out of Egypt. How can we do this?
How can we connect and be inspired to something that happened thousands of years ago?

In this lesson, we will look at three groups of people who saw the Exodus story as inspiration and hope during their own quest for freedom. At the end, you will have an opportunity to share how you connect to the Exodus story.

The US civil rights movement led a campaign in the 1950s and 1960s for equal rights for African Americans. Martin Luther King Jr. was the central figure in the movement and often used biblical imagery in his speeches. The story of Moses speaking to Pharaoh to let his enslaved people be free was used in both the civil rights movement and in the struggle a century earlier to end slavery in America.

The following verse from the book of Exodus was the inspiration for a popular song written in the 1850s by African-American slaves. The song was also sung at civil rights rallies a hundred years later.

Then the LORD said unto Moses: ‘Go in unto Pharaoh, and tell him: Thus saith the LORD, the God of the Hebrews: Let My people go, that they may serve Me.

Hebrew version of "Let My People Go" (Go Down Moses)

After reading the verse and listening to English and Hebrew versions of the song, answer the following questions:

For many years, Jews were not free to practice their Jewish tradition and culture or allowed to leave the Soviet Union and to immigrate to Israel or other countries. International efforts to put pressure on the Soviet Union to free Soviet Jews began in the 1960s and continued until the collapse of the Soviet Union in 1991. Jews in Israel and all over the world supported the Refuseniks (Soviet Jews who were refused permission to emigrate), lobbied their governments to pressurise the Soviet Union, and publicised the plight of Soviet Jewry through rallies and marches.

The story of the Exodus and the holiday of Pesach served as inspiration for Soviet Jewry movement.
“Let My People Go” was the rallying cry, and symbols were added to the Pesach Seder as a reminder that not all Jews were free.

Watch the video below for background on the Soviet Jewry movement.

These are photographs from a rally in Tel Aviv in 1969. After examining the photographs, answer the questions below.

Translation of word on signs: Freedom 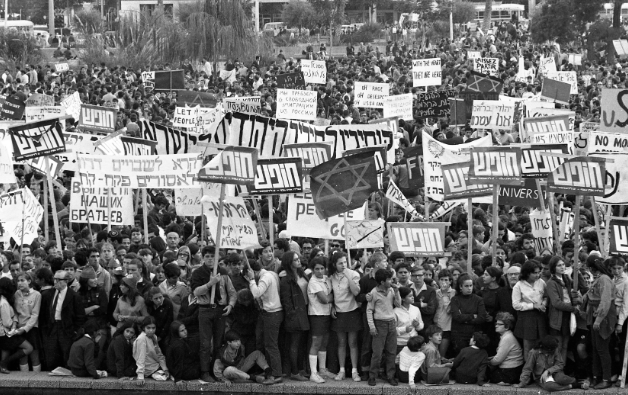 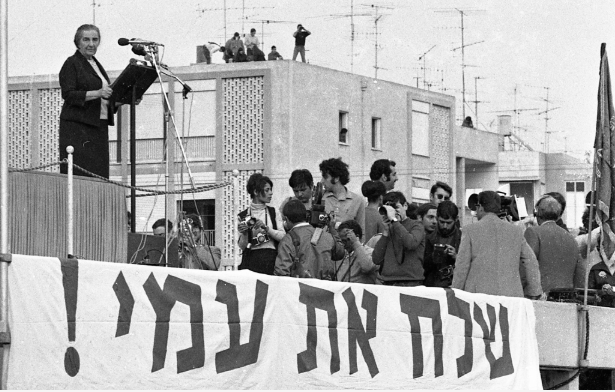 This is a poster published by the Council of Youth Movements in Israel on behalf of Jews living in the USSR.

Examine the poster and answer the following questions: 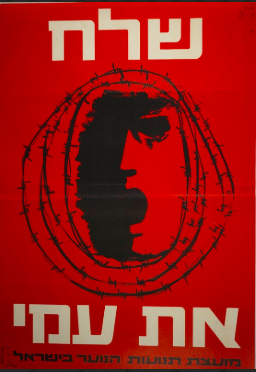 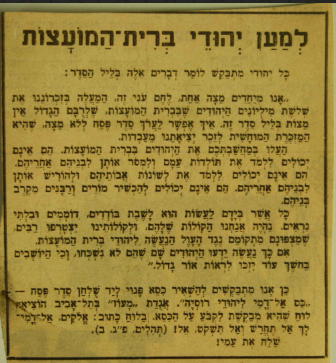 For the Jews of the Soviet Union

All Jews are requested to say these words on Seder night

We set aside one matza, this bread of our affliction, which reminds us of the three million Jews in the Soviet Union, most of whom do not have matzot on this seder night. How can one set a Pesach seder table without matzah, which is the tangible reminder of our exodus from slavery.

All they can do is sit alone, silent, and invisible. We will be their voices, and our voices will be joined by many, whose conscience protests against the injustice that is being done to the Jews of the Soviet Union. If so, the Jews there will know that they have not been forgotten, and that those sitting in the dark will yet be able to see a great light.

Therefore we are asking you to leave an empty chair at the Passover Seder -- “a throne that won’t stay silent for the Jews of Russia”. The “Maoz” society of Tel Aviv published a sign which you are requested to affix to the chair. On the sign is written: O God, do not be silent; do not hold aloof; do not be quiet, O God! (Psalms, 83:2).

This is an article that was published on the eve of Passover 1969, requesting Jews to remember the struggle of the Soviet Jews for freedom.

Read the selection from the Torah, the Haggadah, and the article above and answer the following questions.

The Exodus story was also seen as inspiration for Zionism, as it tells the story of the Jewish nation leaving the foreign country in which they found themselves and returning to their homeland, Israel. 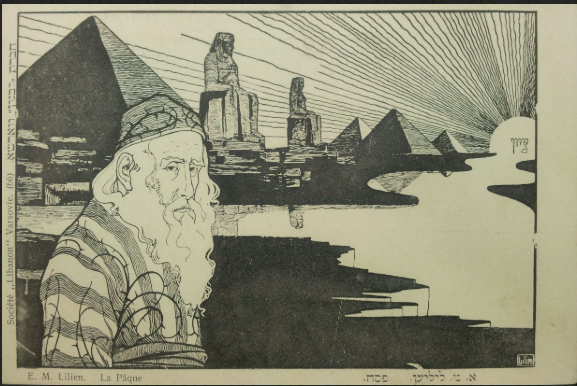 This is the postcard entitled “Pesach” by the Jewish artist Ephraim Moses Lilien, which was revealed at the Fifth Zionist Congress in 1901. Lilien was active in the cultural Zionist movement and was known as the “first Zionist artist. “

Examine the picture and answer the following questions:

We have seen how three social movements – the civil rights movement, the Soviet Jewry movement, and the Zionist movement – found inspiration from the Exodus story, which is the basis of Pesach.

We have also studied the text in the Haggadah stating that all people should see themselves as if they personally had left Egypt.

Choose one of the following: