Responsibility to the Land: To Work It and To Keep It
NI

Description of the Land of Israel

When God told Moses that He was going to take the Israelites out of Egypt and bring them to Canaan, these are the words that He used to describe the land:

In the description of the creation of the world in the book of Genesis, God explains our responsibility to the environment in this way:

(15) The Lord God took the man, and put him into the garden of Eden to work it and to keep it.

The Talmud also deals with the importance of maintaining the land and making sure it is viable for future generations.

Caring for the Land of Israel in the Nineteenth Century

When the early pioneers came to the Land of Israel in the late 1800's, they found a land that hadn't been looked after.

The American writer, Mark Twain, traveling in 1867, described the land in this way:

A desolate country whose soil is rich enough, but is given over wholly to weeds-a silent mournful expanse....A desolation is here that not even imagination can grace with the pomp of life and action....We never saw a human being on the whole route....There was hardly a tree or a shrub anywhere. Even the olive and the cactus, those fast friends of the worthless soil, had almost deserted the country.” (Mark Twain, The Innocents Abroad. [London: 1881])

The Keren Kayemet L’Yisrael - Jewish National Fund (KKL-JNF) was founded in 1901 for the purpose of purchasing and taking care of land in the Land of Israel.
Study the poster below and answer the questions that follow. 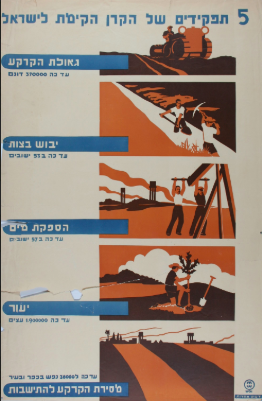 From the collection of the National Library of Israel, Five Roles of JNF

The Five Roles of the Jewish National Fund

Delivery of Land for Settlement – 38,000 people in villages and cities thus far

Caring for the Land of Israel around the Jewish World

JNF is known around the world by the Blue Box that was used to collect money.

Reclaiming the land by planting trees became the work of Jews in Israel and around the world. People young and old donated money to pay for the trees in Israel and the KKL-JNF and other organisations and individuals planted them.

Planting Trees in Israel
Trees were planted throughout the year, but the holiday of Tu Bishvat became a special time for planting trees in Israel.

Look at the photograph below and answer the questions that follow. 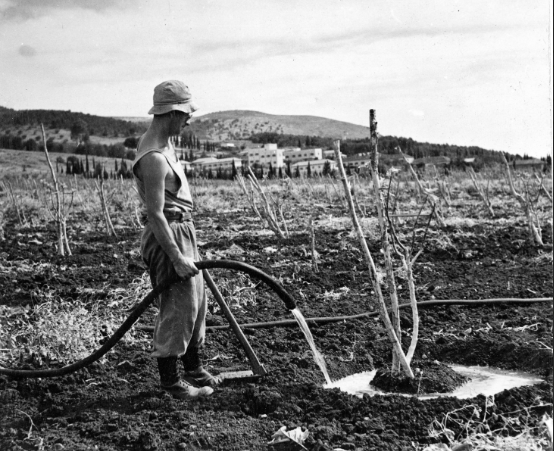 From the collection of the National Library of Israel, Watering Plants, Kibbutz Ginegar

This is a photograph of a man named Raphael Stern from Kibbutz Ginegar, which is located in the Jezreel Valley and was founded in 1922.

Look at another photograph from the same time period and answer the questions that follow.
This is a photograph of children planting trees, presumably on Tu Bishvat. 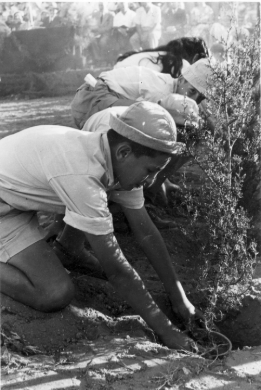 From the collection of the National Library of Israel Tu B'Shvat Tree Planting, Israel

Donating Trees for Planting in Israel

For those who couldn't plant a tree in Israel with their own hands, there was another way to participate in the work of reclaiming the land.

Study the item below and answer the questions that follow. 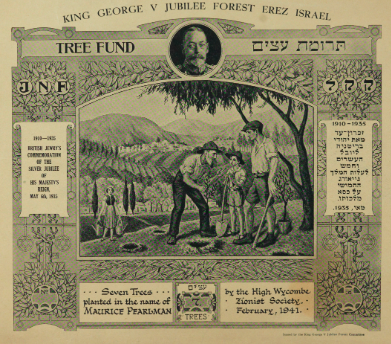 From the collection of the National Library of Israel, Tree Planting Certificate, Twentieth Century

Preservation of the Environment in the State of Israel

Below is a poster published by the KKL-JNF promoting care of the environment.

Look at the poster and answer the questions that follow. 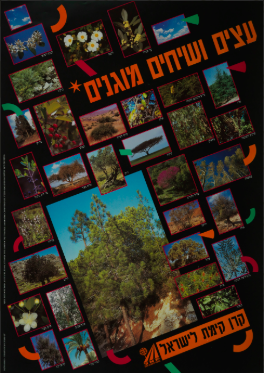 From the collection of the National Library of Israel, Protected Trees and Shrubs, JNF

Choose one of the following ideas. Use Canva or paper and art material to create your poster.

See the education website of the National Library of Israel for additional Tu Bishvat resources and teaching material.