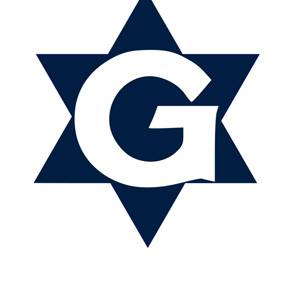 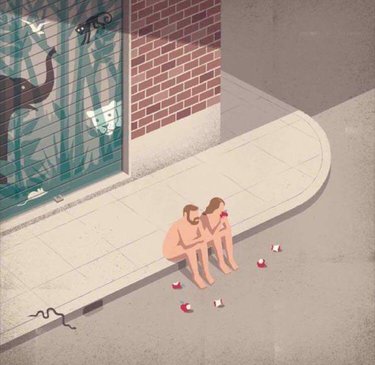 (18) Now YHWH, God, said: It is not good for the human to be alone. I will make him a helper corresponding to him. (19) So YHWH, God, formed from the soil every living-thing of the field and every fowl of the heavens and brought each to the human, to see what he would call it; and whatever the human being called it as a living being, that became its name. (20) The human called out names for every herd-animal and for the fowl of the heavens and for every living-thing of the field, but for the human, there could be found no helper corresponding to him. (21) So YHWH, God, caused a deep slumber to fall upon the human, so that he slept, he took one of his ribs and closed up the flesh in its place. (22) YHWH, God, built the rib that he had taken from the human into a woman and brought her to the human. (23) The human said: This-time, she-is-it! Bone from my bones, flesh from my flesh! She shall be called Woman / Isha, for from Man / Ish she was taken! (24) Therefore a man leaves his father and his mother and clings to his wife, and they come one flesh. (25) Now the two of them, the human and his wife, were nut, yet they were not ashamed.

(8) Now they heard the sound of YHWH, God, (who was) walking about in the garden at the breezy-time of the day. And the human and his wife hid themselves from the face of YHWH, God, amid the trees of the garden. (9) YHWH, God, called to the human and said to him: Where are you? (10) He said: I heard the sound of you in the garden and I was afraid, because I am nude, so I hid myself. (11) He said: Who told you that you are nude? From the tree about which I command you not to eat, have you eaten? (12) The human said: The woman whom you gave to be beside me, she gave me from the tree, and so I ate. (13) YHWH, God, said to the woman: What is this that you have done? The woman said: The snake enticed me, and so I ate. (14) YHWH, God, said to the snake: Because you have done this, damned be you from all the animals and from all the living-things of the field; upon your belly shall you walk and just shall you eat, all the days of your life. (15) I put enmity between you and the woman, between your seed and her seed: they will bruise you on the head, you will bruise them in the heel. (16) To the woman he said: I will multiply, multiply your pain (from) your pregnancy, with pains shall you bear children. Toward your husband will be your lust, yet he will rule over you. (17) To Adam he said: Because you have hearkened to the voice of your wife and have eaten from the tree about which I commanded you, saying: Your are not to eat from it! Damned be the soil on your account, with painstaking-labor shall you eat from it, all the days of your life. (18) Thorn and sting-shrub let it spring up for you, when you (seek to) eat the plants of the field! (19) By the sweat of your brow shall you eat bread, until you return to the soil, for from it you were taken. For you are dust, and to dust shall you return. (20) The human called his wife's name: Havva / Life-giver! For she became the mother of all the living. (21) Now YHWH, God, made Adam and his wife coats of skins and clothed them.

After God created Adam, who was alone, He said, 'It is not good for man to be alone.' He then created a woman for Adam, from the earth, as He had created Adam himself, and called her Lilith. Adam and Lilith immediately began to fight. She said, 'I will not lie below,' and he said, 'I will not lie beneath you, but only on top. For you are fit only to be in the bottom position, while I am to be the superior one.' Lilith responded, 'We are equal to each other inasmuch as we were both created from the earth.' But they would not listen to one another. When Lilith saw this, she pronounced the Ineffable Name and flew away into the air.

Adam stood in prayer before his Creator: 'Sovereign of the universe!' he said, 'the woman you gave me has run away.' At once, the Holy One, blessed be He, sent these three angels Senoy, Sansenoy, and Semangelof, to bring her back.

Said the Holy One to Adam, 'If she agrees to come back, what is made is good. If not, she must permit one hundred of her children to die every day.' The angels left God and pursued Lilith, whom they overtook in the midst of the sea, in the mighty waters wherein the Egyptians were destined to drown. They told her God's word, but she did not wish to return. The angels said, 'We shall drown you in the sea.’

'Leave me!' she said. 'I was created only to cause sickness to infants. If the infant is male, I have dominion over him for eight days after his birth, and if female, for twenty days.’

When the angels heard Lilith's words, they insisted she go back. But she swore to them by the name of the living and eternal God: 'Whenever I see you or your names or your forms in an amulet, I will have no power over that infant.' She also agreed to have one hundred of her children die every day. Accordingly, every day one hundred demons perish, and for the same reason, we write the angels' names on the amulets of young children. When Lilith sees their names, she remembers her oath, and the child recovers.

In the beginning, the Lord God formed Adam and Lilith from the dust of the ground and breathed into their nostrils the breath of life. Created from the same source, both having been formed from the ground, they were equal in all ways. Adam, being a man, didn’t like this situation, and he looked for ways to change it. He said, “I'll have my figs now, Lilith,” ordering her to wait on him, and he tried to leave to her the daily tasks of life in the garden. But Lilith wasn't one to take any nonsense; she picked herself up, uttered God's holy name, and flew away. “Well now, Lord,” complained Adam, “that uppity woman you sent me has gone and deserted me.” The Lord, inclined to be sympathetic, sent his messengers after Lilith, telling her to shape up and return to Adam or face dire punishment. She, however, preferring anything to living with Adam, decided to stay where she was. And so God, after more careful consideration this time, caused a deep sleep to fall on Adam and out of one of his ribs created for him a second companion, Eve.

For a time, Eve and Adam had a good thing going. Adam was happy now, and Eve, though she occasionally sensed capacities within herself that remained undeveloped, was basically satisfied with the role of Adam's wife and helper. The only thing that really disturbed her was the excluding closeness of the relationship between Adam and God. Adam and God just seemed to have more in common, both being men, and Adam came to identify with God more and more. After a while, that made God a bit uncomfortable too, and he started going over in his mind whether he may not have made a mistake letting Adam talk him into banishing Lilith and creating Eve, seeing the power that gave Adam.

Meanwhile Lilith, all alone, attempted from time to time to rejoin the human community in the garden. After her first fruitless attempt to breach its walls, Adam worked hard to build them stronger, even getting Eve to help him. He told her fearsome stories of the demon Lilith who threatens women in childbirth and steals children from their cradles in the middle of the night. The second time Lilith came, she stormed the garden's main gate, and a great battle ensued between her and Adam in which she was finally defeated. This time, however, before Lilith got away, Eve got a glimpse of her and saw she was a woman like herself.

After this encounter, seeds of curiosity and doubt began to grow in Eve's mind. Was Lilith indeed just another woman? Adam had said she was a demon. Another woman! The very idea attracted Eve. She had never seen another creature like herself before. And how beautiful and strong Lilith looked! How bravely she had fought! Slowly, slowly, Eve began to think about the limits of her own life within the garden.

One day, after many months of strange and disturbing thoughts, Eve, wandering around the edge of the garden, noticed a young apple tree she and Adam had planted, and saw that one of its branches stretched over the garden wall. Spontaneously, she tried to climb it, and struggling to the top, swung herself over the wall.

She did not wander long on the other side before she met the one she had come to find, for Lilith was waiting. At first sight of her, Eve remembered the tales of Adam and was frightened, but Lilith understood and greeted her kindly. “Who are you?” they asked each other, “What is your story?” And they sat and spoke together of the past and then of the future. They talked for many hours, not once, but many times. They taught each other many things, and told each other stories, and laughed together, and cried, over and over, till the bond of sisterhood grew between them.

Meanwhile, back in the garden, Adam was puzzled by Eve's comings and goings, and disturbed by what he sensed to be her new attitude toward him. He talked to God about it, and God, having his own problems with Adam and a somewhat broader perspective, was able to help out a little—but he was confused, too. Something had failed to go according to plan. As in the days of Abraham, he needed counsel from his children. “I am who I am,” thought God, “but I must become who I will become.”

And God and Adam were expectant and afraid the day Eve and Lilith returned to the garden, bursting with possibilities, ready to rebuild it together.