In ancient Greece, the symposium (Greek: συμπόσιον symposion or symposio, from συμπίνειν sympinein, "to drink together") was a part of a banquet that took place after the meal, when drinking for pleasure was accompanied by music, dancing, recitals, or conversation.

The Greek symposium was a key Hellenic social institution. It was a forum for men of respected families to debate, plot, boast, or simply to revel with others. They were frequently held to celebrate the introduction of young men into aristocratic society. Symposia were also held by aristocrats to celebrate other special occasions, such as victories in athletic and poetic contests. They were a source of pride for them.

Symposia were usually held in the andrōn (ἀνδρών), the men's quarters of the household. The participants, or "symposiasts", would recline on pillowed couches arrayed against the three walls of the room away from the door.

The men at the symposium would discuss a multitude of topics—often philosophical, such as love and the differences between genders.

A symposium would be overseen by a "symposiarch" who would decide how strong the wine for the evening would be, depending on whether serious discussions or merely sensual indulgence were in the offing. The Greeks and Romans customarily served their wine mixed with water, as the drinking of pure wine was considered a habit of uncivilized peoples. 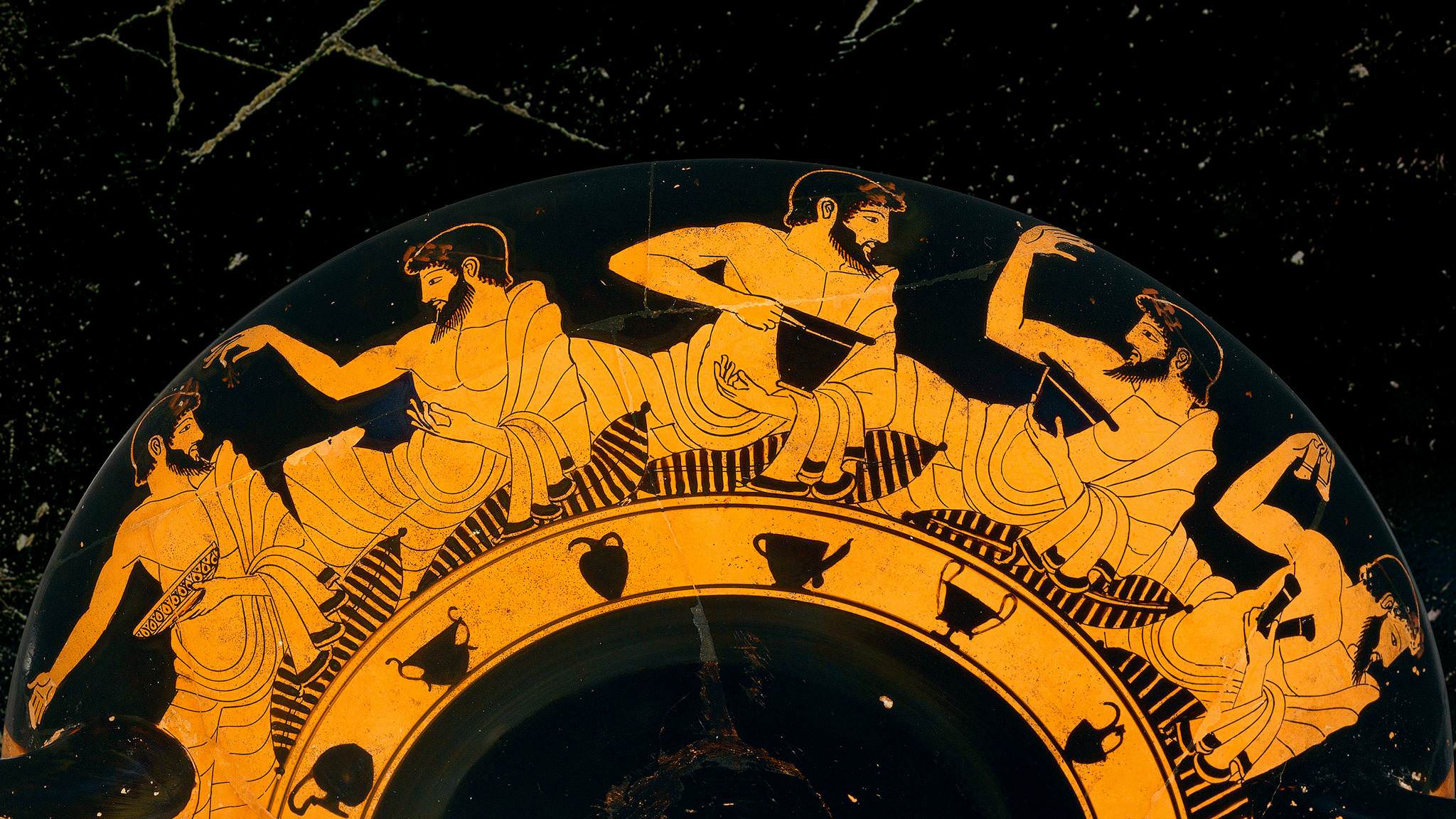 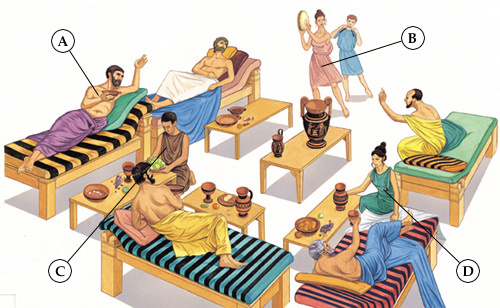 And Rabbi Yehoshua ben Levi said: Women are obligated in these four cups of wine at the Passover seder. As they too were included in that miracle of the Exodus, they are therefore obligated to participate in the celebration.

פסחים צ״ט ב:א׳
מתני׳ ערב פסחים סמוך למנחה לא יאכל אדם עד שתחשך אפילו עני שבישראל לא יאכל עד שיסב ולא יפחתו לו מארבע כוסות של יין ואפילו מן התמחוי:
Pesachim 99b:1
MISHNA: On the eve of Passover, adjacent to minḥa time, a person may not eat until dark, so that he will be able to eat matza that night with a hearty appetite. Even the poorest of Jews should not eat the meal on Passover night until he reclines on his left side, as free and wealthy people recline when they eat. And the distributors of charity should not give a poor person less than four cups of wine for the Festival meal of Passover night. And this halakha applies even if the poor person is one of the poorest members of society and receives his food from the charity plate.
גבורות השם ס״א:ב׳

Some ask: What benefit is the exodus to us, since we are subjugated under other kingdoms? What is the difference between the kingdom of Egypt from that of other kingdoms? This is silly, since when Israel left Egypt, they received goodness in there inherent selves, such that they became worthy themselves to become free people due to their greatness, and this great quality is inherent to the people of Israel, as they are fit to become free because of their greatness, and something accidental [or, tangential] cannot affect something which is inherent, since the people of Israel have this trait, as they are inherently free (and/or noble), and any subjugation is considered accidental [or, tangential]. This is because after the Holy One, blessed be He took Israel out of Egypt, and made them free people...this is the inherent status of Israel, and the greatness and significance of this cannot be nullified through exile, which is considered accidental [or, tangential]....

Question: In what ways do the four cups make the Seder similar to a symposium? In what ways are they different?

Rabbi Levi said, they are parallel to the four kingdoms [prophesied by Daniel; interpreted by the sages as being Babylon, Media/Persia, Greece, and Rome].

the drippings of poterion [a shrub that can be turned into a medicinal potion]; like a vial of poterion after a bath.