Make for Me a Sanctuary and Make a Menorah
RG
by Rabbi Scott Gellman
שמות כ״ה:א׳-ח׳

(1) The LORD spoke to Moses, saying: (2) Tell the Israelite people to bring Me gifts; you shall accept gifts for Me from every person whose heart so moves him. (3) And these are the gifts that you shall accept from them: gold, silver, and copper; (4) blue, purple, and crimson yarns, fine linen, goats’ hair; (5) tanned ram skins, dolphin skins, and acacia wood; (6) oil for lighting, spices for the anointing oil and for the aromatic incense; (7) lapis lazuli and other stones for setting, for the ephod and for the breastpiece. (8) And let them make Me a sanctuary that I may dwell among them.

Why did [God] command the erection of the tabernacle, when [God] said "that I may dwell among them," as if God were an object demarcated and limited in space — which is the opposite of the truth!... After all, God himself spoke these words through the prophet Isaiah (66:1): "The heavens are my throne, and the earth is my footstool; what kind of house can you build for me?"

Know, my child, that any commandment that God requires of humankind comes only out of God's desire to benefit us... God's command to build the Tabernacle, for us to offer therein our prayers and sacrifices, comes not out of God's needs to dwell in an earthly dwelling among humankind, but rather [out of God's awareness that we need] train our own selves...

...Each one of us needs to build God a Tabernacle in the recesses of our hearts, by preparing oneself to become a Sanctuary for God and a place for the dwelling of God's glory.

Oh Lord prepare me to be a sanctuary
Pure and holy, tried and true
And in thanksgiving, I'll be a living
Sanctuary for you.

Even more than the Star of David, the menorah is the symbol that has long been synonymous with the Jewish people. It is the central image in the official seal of the State of Israel. 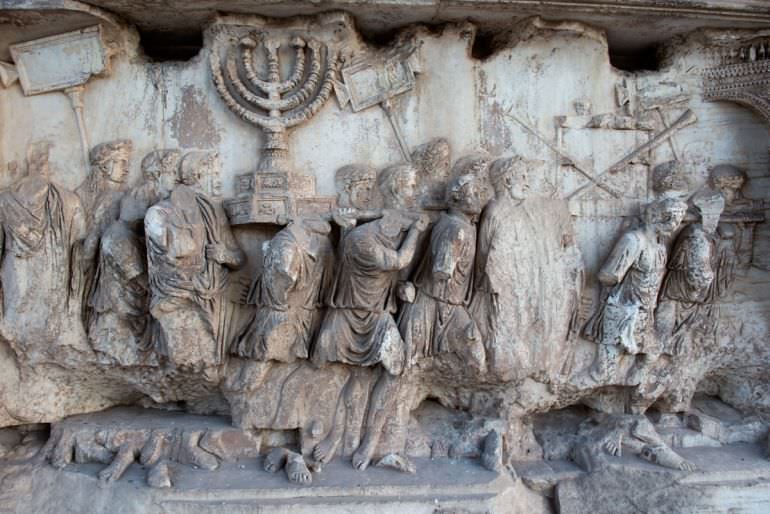 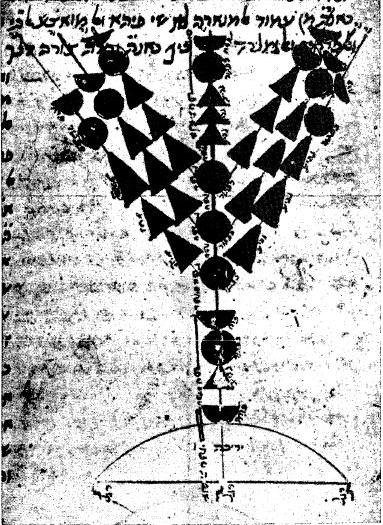 Then 1100 years later, Maimonides offered a version of what he thought the Menorah looked like. Here, the arms are straight diagonals rather than curved branches as depicted in the Arch of Titus. Maimonides interpreted the menorah to look very different than the earlier depiction in the Arch of Titus would suggest.English 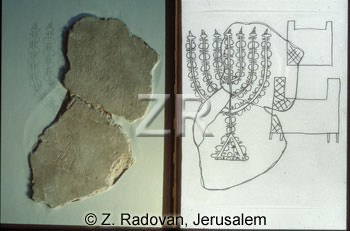 Image from fragments in the Burnt House. The Burnt House is believed to have been set on fire during the Roman destruction of Jerusalem in 70 CE.

Those who argue against its authenticity are quick to point out that certain elements of the menorah are omitted in this depiction. For example, the menorah had feet extending from its base whereas the menorah on the Arch of Titus has no feet. The base of the menorah certain fits the Hellenistic and Herodian style which was current at that time and there is ample reason to suggest Herod redesigned the menorah to make it more atheistically appealing.