R. Joshua b. Levi said to his sons,...be careful [to honour] an old man, who has forgotten his learning involuntarily: for we say that both the whole tables of stone and the pieces of the broken tables were placed in the Ark." 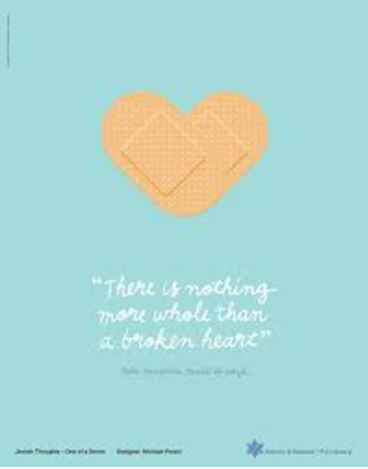 Anthem
The birds they sang

at the break of day
Start again
I heard them say
Don't dwell on what
has passed away
or what is yet to be.
Ah the wars they will
be fought again
The holy dove
She will be caught again
bought and sold
and bought again
the dove is never free.

Ring the bells that still can ring
Forget your perfect offering
There is a crack in everything
That's how the light gets in.

We asked for signs
the signs were sent:
the birth betrayed
the marriage spent
Yeah the widowhood
of every government --
signs for all to see.

I can't run no more
with that lawless crowd
while the killers in high places
say their prayers out loud.
But they've summoned, they've summoned up
a thundercloud
and they're going to hear from me.

Ring the bells that still can ring ...

You can add up the parts
but you won't have the sum
You can strike up the march,
there is no drum
Every heart, every heart
to love will come
but like a refugee.

Ring the bells that still can ring
Forget your perfect offering
There is a crack, a crack in everything
That's how the light gets in.

1. In the beginning of the song, Cohen sings of all the things that are wrong with the world, and the evil that people do to one another. But then he sings:

and they're going to hear from me.

What does he mean by that? What can one person do about this broken world?

Ring the bells that still can ring

There is a crack, a crack in everything

That's how the light gets in.

What is important about the cracks in the world? What is the relationship between cracks and light?

3. Do you feel that there are things in the world that are seriously broken? What is your response to the cracks in everything?

Shortly before Rosh Hashanah 1808, one of Rebbe Nachman’s followers, the shochet (ritual slaughterer) of Teplik, brought the Rebbe an exquisitely handcrafted chair. The Rebbe asked the shochet how long it had taken him to make the chair, and he replied that he had worked an hour a day for the previous six months. The Rebbe said, “Then for half a year, you spent an hour each day thinking of me.”

During the Cossack raids against the Jews in the Ukraine in the early 1920s, the chair was dismantled and cut into small pieces by Reb Tzvi Aryeh Lippel. He carried it from Tcherin to Kremenchug, some twenty miles (thirty-two kilometers) distant, running nearly the entire time. The chair was deposited with the Rosenfeld family of Kremenchug.

In 1936 Reb Moshe Ber Rosenfeld brought the chair to Jerusalem. In 1959 it was restored by craftsmen from the Israel Museum. In 1984 the chair was again refinished, by Katriel’s of Jerusalem, and placed on display in the Breslov synagogue in the Meah Shearim neighborhood of Jerusalem, where it can be seen today. 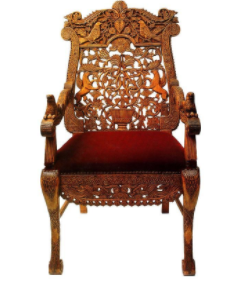 Rabbi Jonathan Sacks, To Heal A Fractured World: The Ethics of Responsibility

“[T]he world is a broken place, literally a broken vessel, and our human task is to put those fragments together — to repair the brokenness.

There are certain questions that, once asked, seem obvious, yet it takes a special genius to formulate them for the first time. That was the case with Rabbi Luria [Rabbi Isaac ben Solomon Luria, 1534-72]. He posed a question, seemingly naïve in its simplicity, yet far-reaching in its consequences: If God exists, how does the world exist? If God is infinite, filling the world with his presence and every place with his glory, how is there room – physical or metaphysical – for anything else? Two things cannot coexist at a single time in a single space. Infinity must always crowd out finitude. How then is there a universe?

Luria’s radical answer was the doctrine known as tzimzum, a word that means contraction, self-effacement, withdrawal or concealment. God, he said, contracted into himself, to leave a space for the world. The universe that unfolded day by day during six phases of Genesis 1 was necessarily only the second stage of creation. The first was the act of divine self-effacement, a withdrawal into himself on the part of God. The Hebrew word for “universe”’ and “eternity”— olam— comes from the root l-m which also means “hiding” or “concealment”. Only when God is hidden can the universe exist.

To this must be added a second idea, shevirat ha-kelim (“breaking of the vessels”), a catastrophe theory of creation. God, in making the world, could not leave it void of His presence. He therefore sent forth rays of his light (strangely, this is not unlike the “background radiation” discovered by scientists in 1965 which eventually proved the Big Bang theory of the birth of the universe). The light was, however, too intense for its containers, which thereby broke, scattering fragments of light throughout the world. It is our task to gather up these fragments, wherever they are, and restore them to their proper place. Hence the third idea: tikkun, healing a fractured world. Each religious act we do has an effect on the ecology of creation. It restores something of lost harmony to the cosmos.”

by Leon Wieseltier (in the NYTimes)

“Dear Uncle Leonard,” the email from the boy began. “Did anything inspire you to create ‘Hallelujah’”? Later that same winter day the reply arrived: “I wanted to stand with those who clearly see G-d’s holy broken world for what it is, and still find the courage or the heart to praise it. You don’t always get what you want. You’re not always up for the challenge. But in this case — it was given to me. For which I am deeply grateful.”
...Leonard was, above all, in his music and in his poems and in his tone of life, the lyrical advocate of the finite and the flawed. As he wrote to my son, who was mercifully too young to understand, he was possessed by a lasting sensation of brokenness. He was broken, love was broken, the world was broken.
His work documents a long and successful war with despair. “I greet you from the other side of sorrow and despair/ With a love so vast and shattered it will reach you everywhere.” The shattering of love has the effect of proliferating it...
He sought recognition for his fallenness, not rescue from it. “There is a crack in everything. That’s how the light gets in.” He once told an interviewer that those words were the closest he came to a credo. The teaching could not be more plain: fix the crack, lose the light.

Leonard Cohen, whose lyrics are quoted above, passed away in the fall of 2016. This piece is a tribute by Leon Wieseltier, the American-Jewish writer, and speaks to the important role that brokenness played in inspiring Mr. Cohen's art. This dark side was core to who he was, but did not push him over the edge into despair. Have you ever experienced personal growth as a result of a moment of shevirah?

(translation excerpted from Genesis: The Beginning of Desire, by Avivah Gottlieb Zornberg)

This Midrash, discussing the Biblical story of Joseph and his brothers, highlights the interplay between brokenness and hope that is a hallmark of this (and many other) Jewish stories. The Midrash plays on the words shever and sever (hope) to show that with each downfall, each blow to the Jewish people, something happened at the same time or shortly after to lift them up. This is essentially the story of the descent into Egypt and the exodus: The people were oppressed and enslaved, and only then could the full story of the Exodus occur. Where in life do you see this interplay between brokenness and hope? Where do you find glimmers of hope in the darkness?

Another time, they (Rabbi Akiva and his colleagues) were ascending to Jerusalem. When they came to Mount Tzofim, they tore their clothes. When they reached the Temple Mount, they saw a fox emerging from the place of the Holy of Holies. They started to cry, but Rabbi Akiva was laughing. The other sages said to him, Why are you laughing? He said to them, Why do you weep? They replied: The place about which was written (Numbers 1,51) "and the non-priest that draws near shall be put to death", is now a den of foxes and we should not weep!?" He replied: "That is why I laugh...

It is written, (Micah 3,12) Therefore shall Zion for your sake be plowed down etc.". Regarding Zechariah it is written (Zechariah 8,4) "There shall yet old men and old women sit in the broad places of Jerusalem."

Rabbi Akiva and his friends are surveying the ruins of the Holy Temple, and whiel everyone else cries, Rabbi Akiva laughs. As the Talmud tells it, Akiva is a source of comfort for his peers because he can see signs of good things to come in the midst of the the ruins. While the others are distressed by so holy a site being ravaged, he reasons that since the prophecies of destruction came true, the prophecies about future rebuilding are also destined to be fulfilled. How might we incorporate into our lives the sense that when things go badly, it is a sign that new opportunities will follow? What practices might encourage us to think or act this way?

We may think of the Shofar, the ram's horn blown on the High Holidays, as a symbol of strength or triumph. In fact, the Talmud reminds us that one of the sounds traditionally made with the Shofar is the t'ruah, a sound that is meant to resemble crying. The rabbis compare this crying to the sobbing of the mother of a man named Sisera, an army general who was killed in battle. In other words, the Shofar calls to God from a place of brokenness, of tears, as we move forward into the new year. Why do you think we include this kind of call in our High Holiday prayer services? Why is this kind of call powerful?

In this TEDx talk, teacher Ramy Mahmoud advocates for teaching students to move past fear and "fail forward" - that is, be willing and ready to fail, and able to go forward from there with a recognition of the challenges that need to be overcome to move forward. Allowing ourselves safe spaces in which to experience our imperfections can push us to use moments of failure to help us move on to success. Can you think of a powerful moment of failure that you've experienced in your own life? How might that moment have helped you to move on to what came next?