From Rebuke to Comfort: The Haftarot Surrounding Tisha B’Av
DS 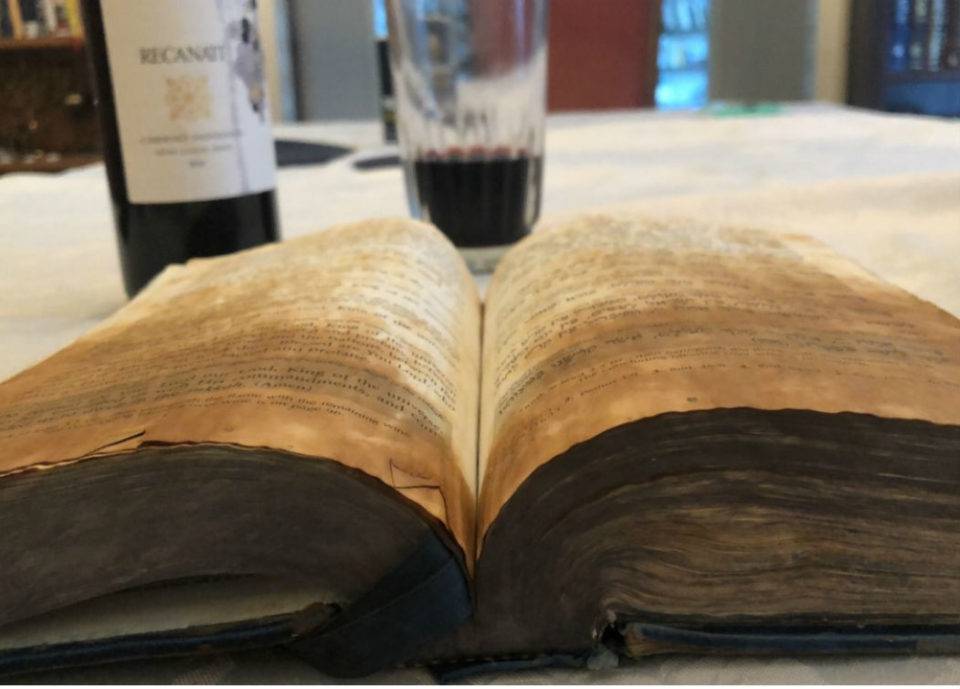 The Haftarot of Rebuke and Comfort “on one foot”:

There are 3 Haftarot of “rebuke” leading up to Tisha B’Av, and 7 Haftarot of “comfort” that make up the period from Tisha B’Av until Rosh Hashanah. Many of them feature phrases that later went into the prayer L’cha Dodi. The first 2 Haftarot of Rebuke are from the Book of Jeremiah, and the 3rd Haftarah of Rebuke as well as all of the Haftarot of Comfort are from Book of Isaiah. The last Haftarah before Tisha B’Av starts with the word “Chazon” (“Vision”), and so that Shabbat is known as “Shabbat Chazon” (featuring “L’cha Dodi” and “Adon Olam” done to the tune “Eili Tziyon”), while the first Haftarah after Tisha B’Av starts with the word “Nachamu” (“Comfort”), and so that Shabbat is known as “Shabbat Nachamu”.

(1) …The mishna records several laws governing public Torah readings. On Mondays and Thursdays during the morning service and on Shabbat during the afternoon service, three people read from the Torah; one may neither decrease the number of readers nor add to them. And one does not conclude with a reading from the Prophets [haftara] on these occasions. …

Context: This is from the Mishnah, Masechet (tractate) Megillah, which is about the reading of Megillat Esther and other liturgical scrolls. It says that there are 3 Torah readings on weekdays, 4 on Rosh Chodesh and Chol HaMoed, 5 on a Festival (Passover, Shavuot, Rosh Hashanah, and Sukkot), 6 on Yom Kippur, and 7 on Shabbat. It also says that there should be a reading from the Prophets on days when there are 5, 6, or 7 Torah readings. This reading is known as a Haftarah, from the word “to conclude”. Note that Haftarot are only done in the morning except on Yom Kippur and Tisha B’Av when there is both a morning and afternoon one.

The Haftarah was chosen to reflect some connection to the Torah reading or occasionally to the calendar. As the Mishnah shows, it was in place by 200 CE, and possibly as early as 70 CE (there’s a reference to Rabbi Eliezer discussing it in Megillah 25b:9). There are a few main theories why the Haftarah was established.

1. The Syrian-Greeks, under King Antiochus in 167 BCE, outlawed the reading of the Torah but not the Prophets / N'vi'im, and so the Jews found prophetic readings that connected in some way to what they would have read. Once they could read Torah again, they kept both readings. It's possible that "Haftarah" is related to the Greek word for "addition". (This is according to Rabbi David Abudarham, 1340 in Spain)

2. The Samaritans were neighbors of the Jews in ancient Israel during the rebuilding of the Second Temple (521-515 BCE); they accepted the first 5 books of the Bible (the Torah), but didn’t accept the rest of it (or Rabbinic interpretation, later on). The Jews wanted to make the point that the prophets were true messengers of G-d, which is why the Haftarah Blessings keep making that point.

3. It was added to expand and supplement the message of the weekly Torah Reading, along with the sermon (Megillah 29b:16-17)

The Maftir aliyah was added to the Torah reading so that the person chanting the Haftarah would receive a Torah aliyah complete with saying the Torah Blessings. The concern was that otherwise people would think that the Torah and Prophets had equal standing by each having people called up to say the blessings over them (originally the person who said the blessings also did the Torah reading) (Megillah 23a:13). The idea that the Bar-Mitzvah boy would receive the Maftir aliyah dates to the 14th century (and some Sefardim today allow minors to do the Maftir aliyah). The Maftir aliyah for Festivals is the reading of the sacrifice for that day, and so there is usually a second Torah scroll pre-rolled to that spot so the congregation is not kept waiting for them to roll through the first scroll. According to Maimonides, the Maftir (like all aliyot) must be at least 3 verses (Mishneh Torah, Prayer 12:13).

Many youth who are becoming a Bar / Bat-Mitzvah chant the Haftarah as it shows they know Hebrew and trope; sometimes it is chanted at an aufruf by one of the people getting married.

Other places in the Mishnah where the Haftarah is mentioned include Megillah 3:5-6 and 4:1-3.

While there is general agreement across the Jewish world about many Haftarot, there are a number of parshiyot for which Ashkenazi Jews (originally from Central and Eastern Europe) and Sephardi Jews (originally from Spain) disagree about the appropriate Haftarah. Sometimes these disagreements are off by a few verses, sometimes by half a chapter, and sometimes by entire books.

Haftarot are chanted with a special version of trope known as Haftarah trope. It is similar to the other 5 systems of trope (Torah, High Holiday Torah, Esther, Eicha, and Rut / Kohelet / Shir HaShirim (“RaKaSh”) ), but sounds a little different (including being in a minor key).

(1) The prophecies of Isaiah son of Amoz, who prophesied concerning Judah and Jerusalem in the reigns of Uzziah, Yotam, Achaz, and Hezekiah, kings of Judah. (2) Hear, O heavens, and give ear, O earth,
For the LORD has spoken:
“I reared children and brought them up—
And they have rebelled against Me! (3) An ox knows its owner,
An ass its master’s crib:
Israel does not know,
My people takes no thought.”
(4) Ah, sinful nation!
People laden with iniquity!
Brood of evildoers!
Depraved children!
They have forsaken the LORD,
Spurned the Holy One of Israel,
Turned their backs [on God].
(5) Why do you seek further beatings,
That you continue to offend?
Every head is ailing,
And every heart is sick. (6) From head to foot
No spot is sound:
All bruises, and welts,
And festering sores—
Not pressed out, not bound up,
Not softened with oil. (7) Your land is a waste,
Your cities burnt down;
Before your eyes, the yield of your soil
Is consumed by strangers—
A wasteland as overthrown by strangers!-a (8) Fair Zion is left
Like a booth in a vineyard,
Like a hut in a cucumber field,
Like a city beleaguered. (9) Had not the LORD of Hosts
Left us some survivors,
We should be like Sodom,
Another Gomorrah.

Why is G-d mad at the Jewish people, and what is their consequence?

Isaiah 1:10-20
(10) Hear the word of the LORD,
You chieftains of Sodom;
Give ear to our God’s instruction,
You folk of Gomorrah! (11) “What need have I of all your sacrifices?”
Says the LORD.
“I am sated with burnt offerings of rams,
And suet of fatlings,
And blood of bulls;
And I have no delight
In lambs and he-goats. (12) That you come to appear before Me—
Who asked that of you?
Trample My courts (13) no more;
Bringing oblations is futile,-c
Incense is offensive to Me.
New moon and sabbath,
Proclaiming of solemnities,
Assemblies with iniquity,-d
I cannot abide. (14) Your new moons and fixed seasons
Fill Me with loathing;
They are become a burden to Me,
I cannot endure them. (15) And when you lift up your hands,
I will turn My eyes away from you;
Though you pray at length,
I will not listen.
Your hands are stained with crime— (16) Wash yourselves clean;
Put your evil doings
Away from My sight.
Cease to do evil; (17) Learn to do good.
Devote yourselves to justice;
Aid the wronged.-e
Uphold the rights of the orphan;
Defend the cause of the widow.
(18) “Come, let us reach an understanding,-e
—says the LORD.
Be your sins like crimson,
They can turn snow-white;
Be they red as dyed wool,
They can become like fleece.” (19) If, then, you agree and give heed,
You will eat the good things of the earth; (20) But if you refuse and disobey,
You will be devoured [by] the sword.-f—
For it was the LORD who spoke.


Context: The middle of the Haftarah. Most of this Haftarah, starting with verse 2, is in Eicha trope (sad), but verses 16-19 are in regular Haftarah trope. Isaiah here is not against ritual, but against hypocritical ritual.

What does G-d really want us to do?

Context: This is the last part of the Haftarah. The beginning of this section starts with the same word as the Book of Lamentations: Eicha. The Eicha trope only goes through verse 23. The beginning of verse 26 (“I will restore your magistrates as of old”) was reworked into the Weekday Amidah. Interestingly, the fraternity ZBT takes its name from the initial letters of the first 3 words in the last verse here (those three words can also be translated as “Zion shall be redeemed with justice”).

Why might it be important for every Haftarah, including this one, to end on a positive note?

Context: This is somebody chanting Haftarat Chazon.


Context: This is from the Book of Isaiah, but it appears to be set after Cyrus the Great has taken over the Babylonian Empire, around 538 BCE. Therefore, this is considered to have been said by “Second Isaiah”, because no one person (named Isaiah) could have been around through the Assyrians, Babylonians, and Persians. “Second Isaiah” starts here, with the beginning of Chapter 40. Note that the phrase in verse 9, “a herald of joy to Zion” (“Mivaseret Tziyon”) is now the name of a suburb of Jerusalem, founded in 1951.

Which phrase(s) would you find especially comforting from this section?


Context: The second half of the Haftarah.

Why would these rhetorical questions be part of a message of comfort?

Context: This song, “Nachamu Ami” was released by the Jewish-American band “Safam”. It was written in 1991 and was on their 1993 album “On Track”. Its lyrics are the first 3 verses of Haftarat Nachamu (Isaiah 40:1-3).

Context: Some time before 2004, Pizmon, the Jewish a cappella group of Columbia / Barnard / List in New York City, took the Safam version of “Nachamu” and wrote an a cappella version (http://www.pizmon.org/uploads/8/0/7/0/80704960/nachamu.pdf). This quickly took the collegiate Jewish a cappella world by storm, and became the go-to song for alumni to sing when they got together. A number of groups sing it, each with their own twist on it. This is the Staam version from Washington University in St. Louis.

Context: The Maccabeats started as a Yeshiva University a cappella group, so they met “Nachamu” from that milieu. They released their own version of it in 2014 on their album “One Day More”.

Context: This is part of a 1741 oratorio by George Handel, called “Messiah”. It is the very first thing that is sung. It is included because in the New Testament these verses are seen as referring to John the Baptist, who is said to smooth the way for Jesus.

Appendix A: The full text of Haftarat Chazon

Appendix B: The full text of Haftarat Nachamu