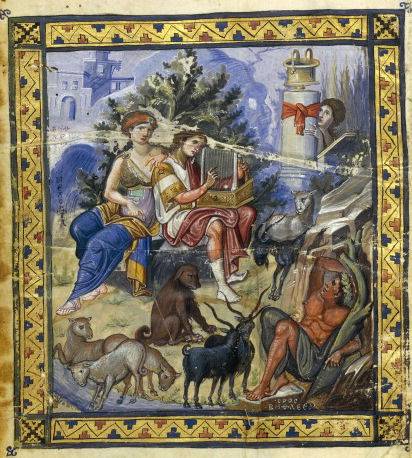 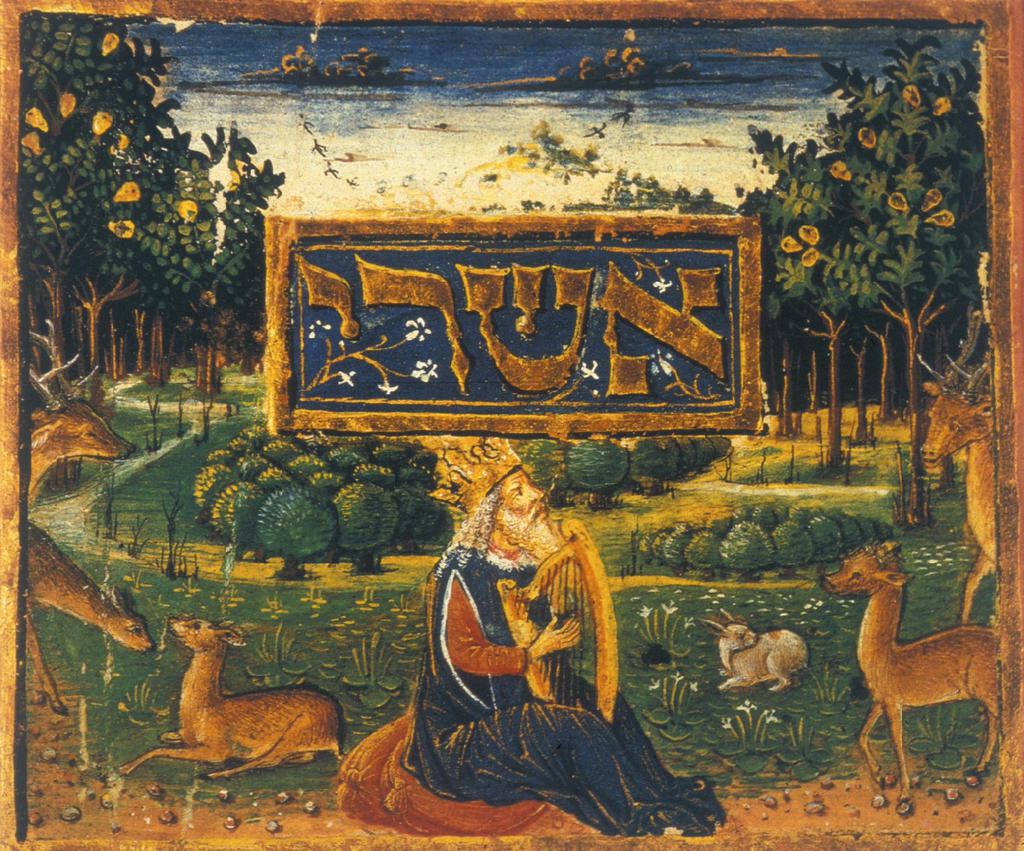 [Accessed at The Visual Commentary on Scripture, https://thevcs.org/blessed-and-wicked/fruit-its-season]

We looked at this illumination earlier in class 2.

Chazan Zion Falah (Contemporary. Singing according to an Eastern tradition.)

"Ashrei" is a liturgical text based on Psalm 145, with two introductory verses and a concluding verse taken from other psalms. The Hebrew word Ashrei (אשרי) means 'happy.' This word appears three times in the introductory verses.

Psalm 145 is often referred to as 'Ashrei' even though that word does not occur in it. Sometimes this psalm is known by its first words, Tehillah leDavid / תהלה לדוד / "[a song of] praise. Of David."

Psalm 145 is an alphabetical acrostic: The verses start with succeeding letters of the Aleph Bet (aleph, bet, gimel, dalet...א,ב,ד,ג), which includes 22 letters. Other psalms with alphabetical acrostics include Psalms 9+10, 25, 34, 111, and 112. In the book of Proverbs, there is the second part of Chapter 31(known as Eishet Chayil/A Woman of Valor).

Alphabetical acrostics are not always complete. In fact, Psalm 145 lacks a verse for the letter Nun נ.

"Ashrei" is traditionally recited 1) as the first of the psalms of Pesukei deZimrah/Verses of Song in the Morning service before the blessings of the Shema (Psalms 145-150); 2) as part of the conclusion of the morning service; and 3) as the opening passage of the Afternoon service.

Rabbi Yosei said: May my portion be among those who complete hallel every day. The Gemara is surprised at this: Is that so? Didn’t the Master say: One who reads hallel every day is tantamount to one who curses and blasphemes God. He displays contempt for hallel by not reserving it for days on which miracles occurred. The Gemara answers: When we say this statement of Rabbi Yosei, we are referring to the verses of praise [pesukei dezimra], Psalms 145-150, recited during the morning service, not to hallel (Psalms 113–118) recited on special days.

We learned in the mishna (Mishnah Berachot 5:1) that the early generations of pious men would wait one hour in order to achieve the solemn frame of mind appropriate for prayer.

The Gemara asks: From where are these matters derived? Rabbi Yehoshua ben Levi said: This is alluded to when the verse states: “Happy are those who dwell in Your House” (Psalms 84:5), immediately after which it is said: “They will yet praise You, Selah.”

Rabbi Elazar said that Rabbi Avina said: Anyone who recites: “A Psalm of David” (Psalms 145) three times every day is assured of a place in the World-to-Come.

(Comment of Gilyon HaShaS suggests that 'three times' is not part of the original text and was added during the period of the post-Talmudic Geonim.)

What is the reason that such significance is ascribed to this particular chapter? If you say that it is because it is arranged alphabetically, then let us say: “Happy are they who are upright in the way” (Psalms 119) where the alphabetical arrangement appears eight times.

...if you suggest that this particular chapter is recited because it contains praise for God’s provision of sustenance to all of creation: “You open Your hand and satisfy every living thing with favor” (Psalms 145:16), then let him recite the great hallel (Psalms 136), in which numerous praises are written, including: “Who provides food to all flesh, Whose kindness endures forever” (Psalms 136:25).

...the reason why tehilla leDavid is accorded preference is because it contains both an alphabetic acrostic as well as mention of God’s provision of sustenance to all creation.

(5) Happy are those who dwell in Your house;
they forever praise You. Selah.

I will extol You, my God and king,
and bless Your name forever and ever. (2) Every day will I bless You
and praise Your name forever and ever. (3) Great is the LORD and much acclaimed;
His greatness cannot be fathomed. (4) One generation shall laud Your works to another
and declare Your mighty acts. (5) The glorious majesty of Your splendor
and Your wondrous acts-a will I recite. (6) Men shall talk of the might of Your awesome deeds,
and I will recount Your greatness. (7) They shall celebrate Your abundant goodness,
and sing joyously of Your beneficence. (8) The LORD is gracious and compassionate,
slow to anger and abounding in kindness (hesed). (9) The LORD is good to all,
and His mercy is upon all His works. (10) All Your works shall praise You, O LORD,
and Your faithful ones (hasid) shall bless You. (11) They shall talk of the majesty of Your kingship,
and speak of Your might, (12) to make His mighty acts known among men
and the majestic glory of His kingship. (13) Your kingship is an eternal kingship;
Your dominion is for all generations. (14) The LORD supports all who stumble,
and makes all who are bent stand straight. (15) The eyes of all look to You expectantly,
and You give them their food when it is due. (16) You give it openhandedly,
feeding every creature to its heart’s content. (17) The LORD is beneficent in all His ways
and faithful in all His works. (18) The LORD is near to all who call Him,
to all who call Him with sincerity. (19) He fulfills the wishes of those who fear Him;
He hears their cry and delivers them. (20) The LORD watches over all who love Him,
but all the wicked He will destroy. (21) My mouth shall utter the praise of the LORD,
and all creatures shall bless His holy name forever and ever.

In each and every generation, a person is obligated to see himself as if he left Egypt, as it is stated (Exodus 13:8); "And you shall explain to your son on that day: For the sake of this, did the Lord do [this] for me in my going out of Egypt." Not only our ancestors did the Holy One, blessed be He, redeem, but rather also us [together] with them did He redeem, as it is stated (Deuteronomy 6:23); "And He took us out from there, in order to bring us in, to give us the land which He swore unto our fathers."

"Molly participates in the 929 initiative with a dedicated group from the Beth Avraham Yoseph of Toronto congregation."

This psalm tells us that each generation will praise and recite God’s deeds to the next. These are the generational remembrances of the epic acts of God, the supernatural events that have highlighted Jewish history. Each generation passes on the memories that have passed down, and adds the knowledge they personally have gained from their own lived experience. While we sometimes mourn our every-increasing temporal distance from the open miracles of biblical times, we are reassured in this psalm that our closeness to God comes, at least in part, from the iterative process of remembering the past and accumulating new memories from every generation.

The attributes of divine mercy (verse 8)

(6) ה' passed before him and proclaimed: “י-הוה ! ה' ! a God compassionate and gracious, slow to anger, abounding in kindness and faithfulness,

Adonai is good to all (verse 9)

תהילים קמ״ה:ט׳
(ט) טוֹב־ה' לַכֹּ֑ל וְ֝רַחֲמָ֗יו עַל־כׇּל־מַעֲשָֽׂיו׃
Psalms 145:9
(9) The LORD is good to all,
and His mercy is upon all His works.
רד"ק על תהילים קמ״ה:ח׳:ד׳
טוב ה' לכל. אפי' למיני החיות והבהמות והעופות הוא טוב ומרחם וכן ראוי לאדם ללכת בדרכיו אלה ואין לו להשחית החיים כי אם לצורך או להשמר מנזקיהם, וכן מצאנו כי רבינו הקדוש הזהיר שפחתו שלא לאסוף החולדות הקטנות עם רמץ הבית אלא תניחם להיות דרים בעיקרי הבית אמר לה ורחמיו על כל מעשיו כתיב:
Radak on Psalms 145:8:4
[Adonai] is good to all. He is good and merciful even to wild animals, domesticated animals, and fowl. And so it is fitting for a person to follow these ways of His. One should not destroy life other than for a need or to guard oneself from dangers. So we find that our Holy Master (Rabbi Judah the Prince, editor of the Mishnah) bade his handmaiden not to sweep up mice with household embers. Rather, she should let them live in the cellar. He said to her, "It is written, 'His mercy is upon all His works.'"

Ratzon may be an expression of...

(16) You give it openhandedly,
feeding every creature to its heart’s content (ratzon רצון).

(27) All of them [all of God's creations] look to You
to give them their food when it is due. (28) Give it to them, they gather it up;
open Your hand, they are well satisfied; (29) hide Your face, they are terrified;
take away their breath, they perish
and turn again into dust;

(11) For there will never cease to be needy ones in your land, which is why I command you: open your hand to the poor and needy kin in your land.

Deut 7:6 For you are a people kadosh [holy] to YHWH your God: of all the peoples on earth YHWH your God chose you to be His segulah [treasured] people.

Spinoza deployed a number of Biblical verses including Psalm 145:18 to demonstrate that the Hebrew Bible itself acknowledged that God’s grace is bestowed upon all humanity,

The Deuteronomic claim that God holds Israel in special regard, therefore, should not be understood as evidence of capricious Divine choice, but rather a descriptive statement relating to a particular time and place.

What do you think this word communicates?

(11) They shall talk of the majesty of Your kingship,
and speak of Your might, (12) to make His mighty acts known among men
and the majestic glory of His kingship.

I will extol You, my God and king,
and bless Your name forever and ever.

(21) My mouth shall utter the praise of the LORD,
and all creatures shall bless His holy name forever and ever.

(5) Happy are those who dwell in Your house;
they forever praise/ye-hallelu-kha You. Selah.

(18) But (or And) we will bless the LORD
now and forever.
Hallelujah.

[Ashrei is the entire book of Psalms in Miniature: echoes of the beginning of Psalm 1 and the end of Psalm 150]

(1) Happy is the man who has not followed the counsel of the wicked,
or taken the path of sinners,
or joined the company of the insolent;

The beginning of Ashrei:

(5) Happy are those who dwell in Your house;
they forever praise You. Selah.

(6) Let all that breathes praise the LORD.
Hallelujah.

The end of Ashrei:

(18) But we will bless the LORD
now and forever.
Hallelujah.