Not Holier than Thou
GS

(38) Speak to the Israelite people and instruct them to make for themselves fringes on the corners of their garments throughout the ages; let them attach a cord of blue to the fringe at each corner. (39) That shall be your fringe; look at it and recall all the commandments of the LORD and observe them, so that you do not follow your heart and eyes in your lustful urge. (40) Thus you shall be reminded to observe all My commandments and to be holy to your God.

Numbers 16:1-3
(1) Now Korah, son of Izhar son of Kohath son of Levi, betook himself, along with Dathan and Abiram sons of Eliab, and On son of Peleth—descendants of Reuben— (2) to rise up against Moses, together with two hundred and fifty Israelites, chieftains of the community, chosen in the assembly, men of repute. (3) They combined against Moses and Aaron and said to them, “You have gone too far! For all the community are holy, all of them, and the LORD is in their midst. Why then do you raise yourselves above the LORD’s congregation?”
מדרש תנחומא, קרח ב׳:א׳

(Numb. 16:1:) “Now Korah […] took.” What is written above the matter (in Numb. 15:38)? “Speak unto the Children of Israel and tell them to make tassels (zizit) for themselves.’” Korah quickly said to Moses, “In the case of a prayer shawl (tallit) which is all blue, what is the rule about it being exempt from [having] the tassel?” Moses said to him, “[Such a prayer shawl] is required to have the tassels.” Korah said to him, “Would not a prayer shawl which is all blue exempt itself, when four [blue] threads exempt it? ...

Then Moses said (in Numb. 15:38), “And put on the tassel of each corner a thread of blue,” what did Korah do? He immediately ordered them to make two hundred and fifty blue shawls for those two hundred and fifty heads of sanhedraot who rose up against Moses to wrap themselves in, just as it is stated (in Numb. 16:2), “And they rose up against Moses, together with two hundred and fifty men from the children of Israel.” And who are they? (Numb. 16:2, cont.:) “Princes of the congregation, chosen in the assembly, men of repute.” Korah arose and made them a banquet at which they all wrapped themselves in blue prayer shawls. [When] Aaron's sons came to receive their dues, [namely the] breast and right thigh, they arose against them and said to them, “Who commanded you to receive such? Was it not Moses? [If so,] we shall not give you anything, as the Holy One, blessed be He, has not commanded it.” They came and informed Moses. He went to placate them. They immediately confronted him, as stated (ibid.), “And they rose up against Moses.”

In modern Hebrew idiom, the sarcastic expression, "a completely blue tallit" (טלית שכולה תכלת) is widely used to refer to something that is ostensibly, but not really, absolutely pure, immaculate and virtuous. (An English parallel might be calling someone "Mr. Perfect.") The expression stems from rabbinic lore about the biblical figure Korah who led a revolt against the leadership of Moses and Aaron. Koraḥ was said to have asked Moses a number of vexatious, mocking questions, one of which was, "Does a tallit made entirely of blue yarn require tzitzit?" To Moses' affirmative answer, Koraḥ objected that an ordinary (undyed) tallit is rendered 'kosher' (meaning, in this context, ritually fit to be worn) by attaching to its corners the tzitzit tassels, whose key feature was the single thread of blue (פתיל תכלת) contained in each tassel.[18] If so, what addition of holiness[19] could the tzitzit contribute to a tallit which was made entirely of the same sky-blue yarn?

The notion implicit in questions like this attributed by the rabbis to Koraḥ is the same as that expressed in Koraḥ's challenge to Moses and Aaron (Numbers 16:3), "The entire congregation is holy, and God is in their midst, so why do you exalt yourselves above God's congregation?" Koraḥ ostensibly subscribed to the laws that were the subject of his questions to Moses, but was really using them to mock and discredit Moses. Therefore, Koraḥ's question about a tallit made entirely of blue yarn, which is ostensibly "more kosher than tzitzit" but is really not, since it still requires tzitzit, became, in Hebrew idiom, an epithet used sarcastically against hypocritical displays of false piety.

The phrase "more kosher than tzitzit" is a Yiddish metaphoric expression (כשר'ער ווי ציצית) with similar connotations but is not necessarily used in a sarcastic sense. It can refer, in the superlative, to something that is really so perfect and flawless as to be beyond all reproach or criticism. 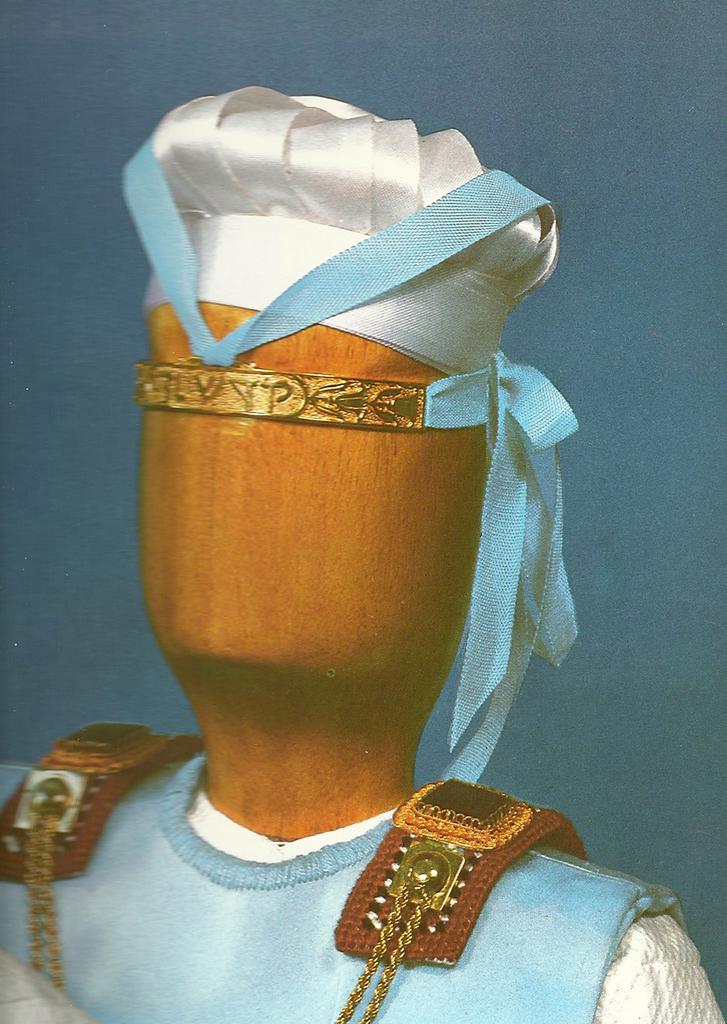 (Numb. 15:38:) “Then the Lord spoke unto Moses saying, ‘Speak unto the Children of Israel and tell them to make tassels for themselves.’” Make them, and not that they shall be from [something already] made. Thus one must not extract threads from the cloak [itself] and make [tassels] from them. Rather [it is] a command to get [fresh] white and blue threads to make them. When [did this rule apply]? When there was [a real] blue, but now we only have white, because the blue has been hidden. (Ibid., cont.:)

Yigal Yadin found a bundle of blue wool in an archeological excavation in a cave in the Ein Gedi desert. Clearly the blue wool showed that the Jewish rebels who occupied the cave observed the techelet commandment, but what testing in Yadin’s lab showed, was that the die used was in fact not from the hillazon mollusk and was therefore proof of how widespread the corruption had spread.

The irony of the rebel Jews confronting imperial Rome with a stash of the Royal techelet….recorded in a book written by a secular Israeli archaeologist who was also a chief of staff of the IDF, and who knows his Talmud and understands the socio-economic trials of Second century Jews…. is almost too much to take!

"With it we found several unfinished ritual fringes (or sisioths). The colour of this dyed wool was identical with that of the Tyrian purple (obtained from Murex brandaris) believed by many to be the BiblicalTkheleth, the colour of the sisith. However, an analysis by Edelstein and Abrahams of the Dexter Chemical Corporation of New York showed that the colour of our fringes -as not obtained from Murex brandaris, but rather from indigo and carminic acid. (Carminic acid is the colour principle of the well-known kermes dye, obtained from the female of the insect Coccus ilicis which lives on a particular species of oak [Quercus coccifera] and is even today considered very precious.) This offered us a chance to learn very important facts about the problems of the trueTkheleth which confronted pious Jews, and were of great concern to the rabbis. In disturbed times, as those of Bar-Kokhba, it was most difficult to obtain this expensive dye and it was thus often imitated and faked. Since in practice it was almost impossible to tell the real Tkheleth from the imitation, the rabbis ruled: ‘There is no manner of testing theTkheleth; it should therefore be bought only from an expert’ (Babylonian Talmud, Menahot 42b). Some makeshift tests, the Talmud records, were actually confusing. How a bundle of wool, such as ours, dyed not with Tyrian purple but – as ascertained by Edelstein and Abrahams through infra-red spectro-photometry – with indigo, kermes and highly sophisticated mordants which gave it the appearance of true purple, would stand up under these tests, is unknown. Let us, at least, give the people of the cave the benefit of the doubt, that they bought it bona fide from a non-expert, unaware that it was an imitation. According to the Talmud (Babylonian Talmud, Baba Metzia 6Ib): ‘It is I who will exact vengeance from him who attached to his garments threads dyed with indigo and maintains that it is Tkheleth.’ In other words, the real crime was when the fake was deliberate." (Bar-Kokhba: The Rediscovery of the Legendary Hero of the Last Jewish Revolt Against Imperial Rome, Yigael Yardin, 1971 pp 83-84) 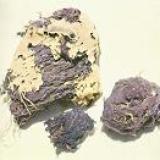 In preparing for the First Zionist Congress in Basel in 1897, Wolffsohn wrote: "What flag would we hang in the Congress Hall? Then an idea struck me. We have a flag—and it is blue and white. The talith (prayer shawl) with which we wrap ourselves when we pray: that is our symbol. Let us take this Talith from its bag and unroll it before the eyes of Israel and the eyes of all nations. So I ordered a blue and white flag with the Shield of David painted upon it. That is how the national flag, that flew over Congress Hall, came into being." Morris Harris, a member of New York Hovevei Zion, used his awning shop to design a suitable banner and decorations for the reception, and his mother Lena Harris sewed the flag. The flag was made with two blue stripes and a large blue Star of David in the center, the colours blue and white chosen from the design of the tallit. See Wikipedia: Flag of Israel