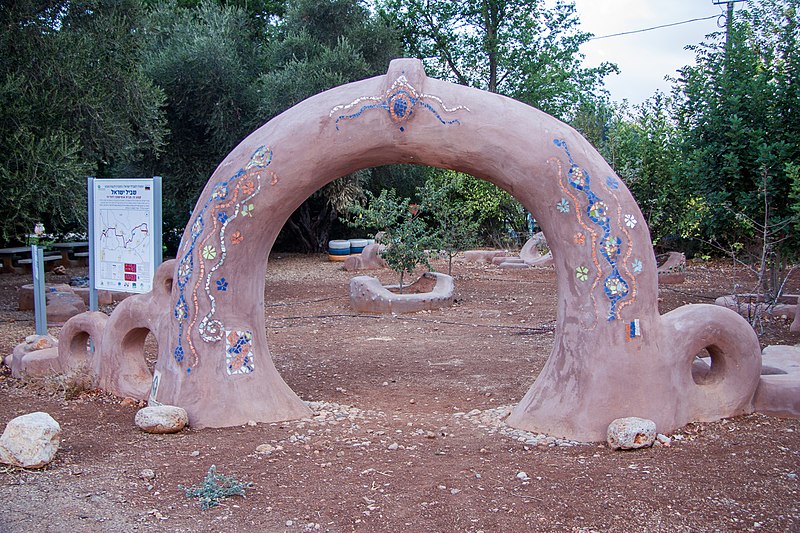 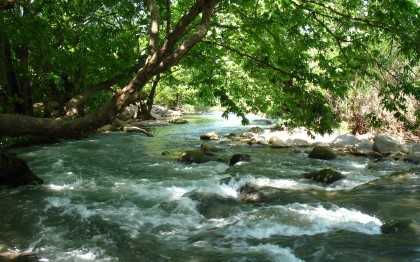 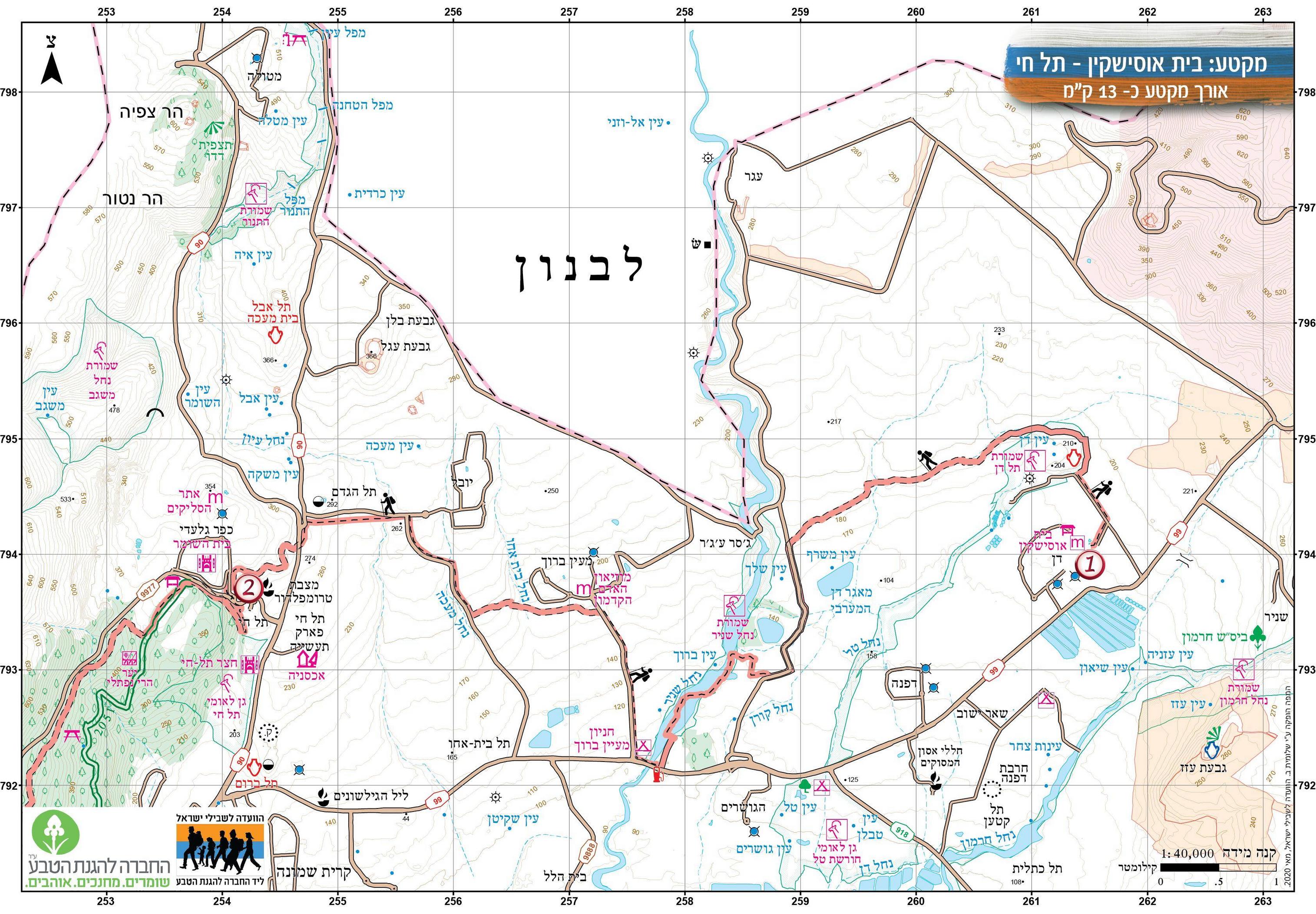 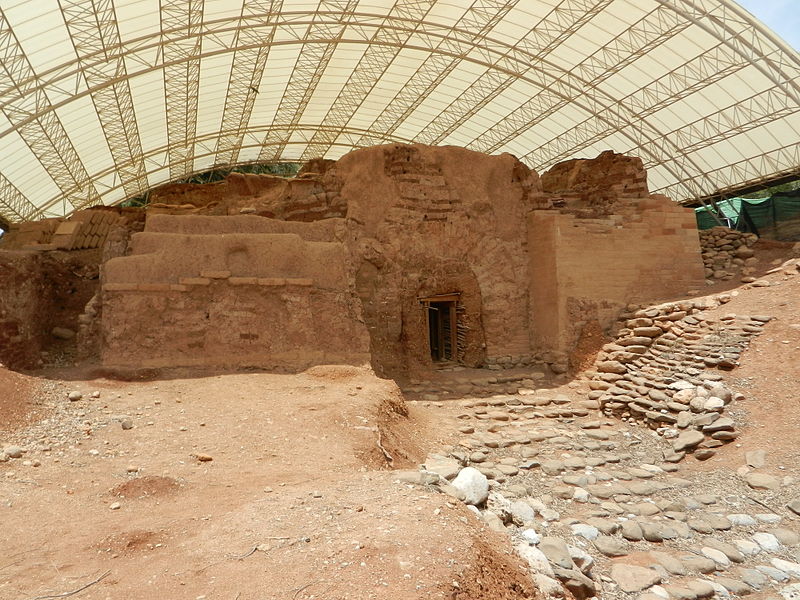 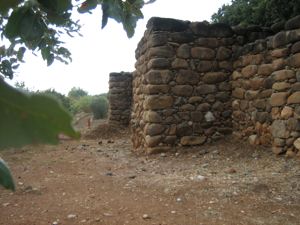 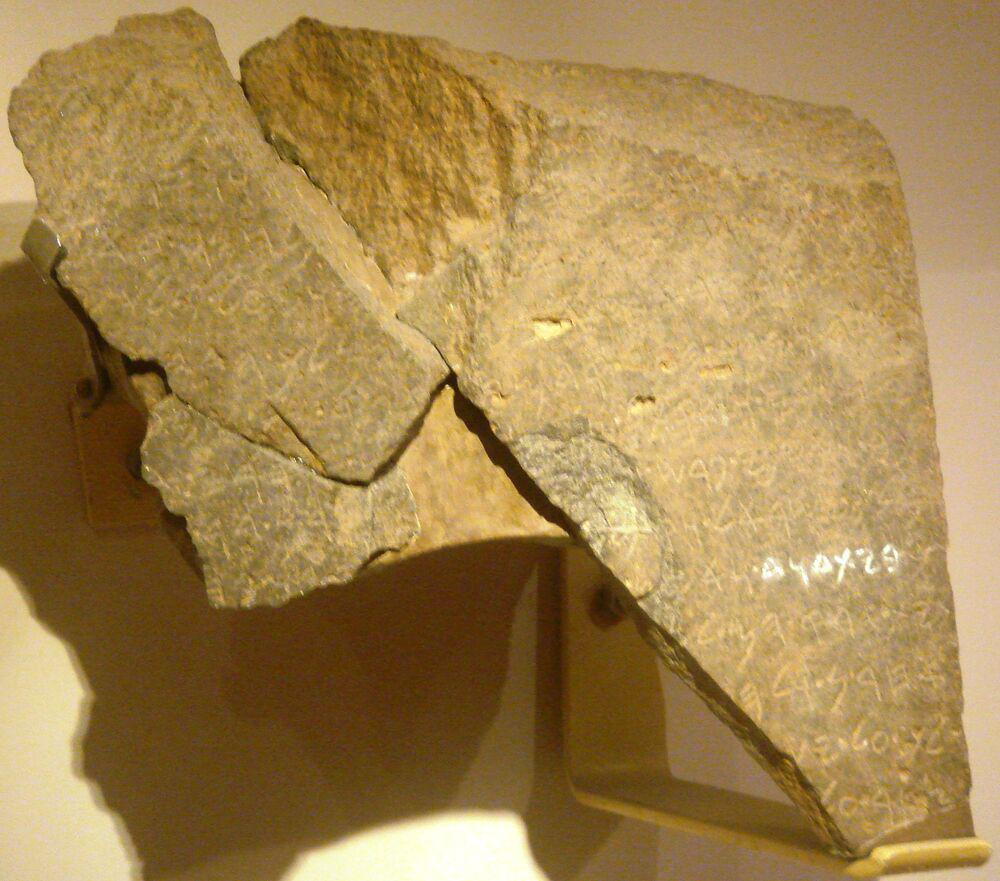 I Kings 12:26-33
(26) Jeroboam said to himself, “Now the kingdom may well return to the House of David. (27) If these people still go up to offer sacrifices at the House of the LORD in Jerusalem, the heart of these people will turn back to their master, King Rehoboam of Judah; they will kill me and go back to King Rehoboam of Judah.” (28) So the king took counsel and made two golden calves. He said to the people, “You have been going up to Jerusalem long enough. This is your god, O Israel, who brought you up from the land of Egypt!” (29) He set up one in Bethel and placed the other in Dan. (30) That proved to be a cause of guilt, for the people went to worship [the calf at Bethel and] the one at Dan. (31) He also made cult places and appointed priests from the ranks of the people who were not of Levite descent. (32) He stationed at Bethel the priests of the shrines that he had appointed to sacrifice to the calves that he had made. And Jeroboam established a festival on the fifteenth day of the eighth month; in imitation of the festival in Judah, he established one at Bethel, and he ascended the altar [there]. (33) On the fifteenth day of the eighth month—the month in which he had contrived of his own mind to establish a festival for the Israelites—Jeroboam ascended the altar that he had made in Bethel. 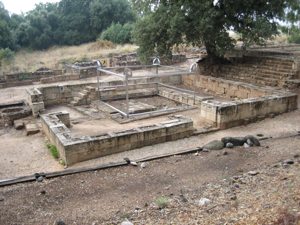 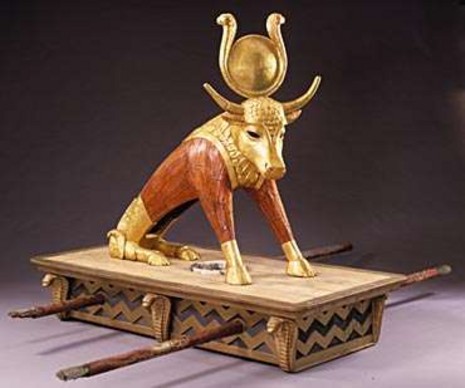 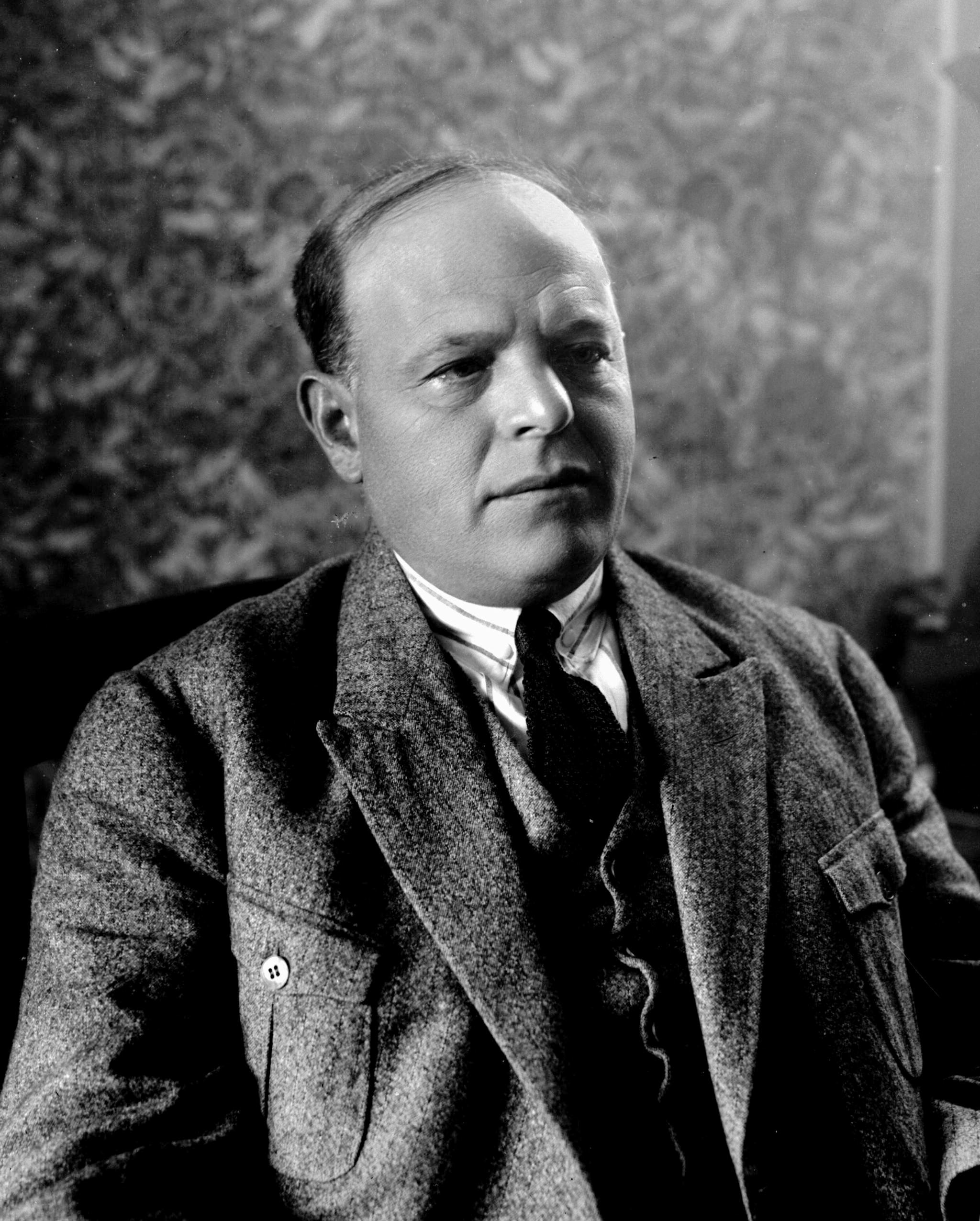 Judges 18
(1) In those days there was no king in Israel, and in those days the tribe of Dan was seeking a territory in which to settle; for to that day no territory had fallen to their lot among the tribes of Israel. (2) The Danites sent out five of their number, from their clan seat at Zorah and Eshtaol—valiant men—to spy out the land and explore it. “Go,” they told them, “and explore the land.” When they had advanced into the hill country of Ephraim as far as the house of Micah, they stopped there for the night. (3) While in the vicinity of Micah’s house, they recognized the speech of the young Levite, so they went over and asked him, “Who brought you to these parts? What are you doing in this place? What is your business here?” (4) He replied, “Thus and thus Micah did for me—he hired me and I became his priest.” (5) They said to him, “Please, inquire of God; we would like to know if the mission on which we are going will be successful.” (6) “Go in peace,” the priest said to them, “the LORD views with favor the mission you are going on.” (7) The five men went on and came to Laish. They observed the people in it dwelling carefree, after the manner of the Sidonians, a tranquil and unsuspecting people, with no one in the land to molest them and with no hereditary ruler. Moreover, they were distant from the Sidonians and had no dealings with anybody. (8) When [the men] came back to their kinsmen at Zorah and Eshtaol, their kinsmen asked them, “How did you fare?” (9) They replied, “Let us go at once and attack them! For we found that the land was very good, and you are sitting idle! Don’t delay; go and invade the land and take possession of it, (10) for God has delivered it into your hand. When you come, you will come to an unsuspecting people; and the land is spacious and nothing on earth is lacking there.” (11) They departed from there, from the clan seat of the Danites, from Zorah and Eshtaol, six hundred strong, girt with weapons of war. (12) They went up and encamped at Kiriath-jearim in Judah. That is why that place is called “the Camp of Dan” to this day; it lies west of Kiriath-jearim. (13) From there they passed on to the hill country of Ephraim and arrived at the house of Micah. (14) Here the five men who had gone to spy out the Laish region remarked to their kinsmen, “Do you know, there is an ephod in these houses, and teraphim, and a sculptured image and a molten image? Now you know what you have to do.” (15) So they turned off there and entered the home of the young Levite at Micah’s house and greeted him. (16) The six hundred Danite men, girt with their weapons of war, stood at the entrance of the gate, (17) while the five men who had gone to spy out the land went inside and took the sculptured image, the ephod, the teraphim, and the molten image. The priest was standing at the entrance of the gate, and the six hundred men girt with their weapons of war, (18) while those men entered Micah’s house and took the sculptured image, the molten image, the ephod, and the household gods. The priest said to them, “What are you doing?” (19) But they said to him, “Be quiet; put your hand on your mouth! Come with us and be our father and priest. Would you rather be priest to one man’s household or be priest to a tribe and clan in Israel?” (20) The priest was delighted. He took the ephod, the household gods, and the sculptured image, and he joined the people. (21) They set out again, placing the children, the cattle, and their household goods in front. (22) They had already gone some distance from Micah’s house, when the men in the houses near Micah’s mustered and caught up with the Danites. (23) They called out to the Danites, who turned around and said to Micah, “What’s the matter? Why have you mustered?” (24) He said, “You have taken my priest and the gods that I made, and walked off! What do I have left? How can you ask, ‘What’s the matter’?” (25) But the Danites replied, “Don’t do any shouting at us, or some desperate men might attack you, and you and your family would lose your lives.” (26) So Micah, realizing that they were stronger than he, turned back and went home; and the Danites went on their way, (27) taking the things Micah had made and the priest he had acquired. They proceeded to Laish, a people tranquil and unsuspecting, and they put them to the sword and burned down the town. (28) There was none to come to the rescue, for it was distant from Sidon and they had no dealings with anyone; it lay in the valley of Beth-rehob. They rebuilt the town and settled there, (29) and they named the town Dan, after their ancestor Dan who was Israel’s son. Originally, however, the name of the town was Laish. (30) The Danites set up the sculptured image for themselves; and Jonathan son of Gershom son of Manasseh, and his descendants, served as priests to the Danite tribe until the land went into exile. (31) They maintained the sculptured image that Micah had made throughout the time that the House of God stood at Shiloh.

Deuteronomy 33
(1) This is the blessing with which Moses, the man of God, bade the Israelites farewell before he died. (2) He said: The LORD came from Sinai; He shone upon them from Seir; He appeared from Mount Paran, And approached from Ribeboth-kodesh, Lightning flashing at them from His right. (3) Lover, indeed, of the people, Their hallowed are all in Your hand. They followed in Your steps, Accepting Your pronouncements, (4) When Moses charged us with the Teaching As the heritage of the congregation of Jacob. (5) Then He became King in Jeshurun, When the heads of the people assembled, The tribes of Israel together. (6) May Reuben live and not die, Though few be his numbers. (7) And this he said of Judah: Hear, O LORD the voice of Judah And restore him to his people. Though his own hands strive for him, Help him against his foes. (8) And of Levi he said: Let Your Thummim and Urim Be with Your faithful one, Whom You tested at Massah, Challenged at the waters of Meribah; (9) Who said of his father and mother, “I consider them not.” His brothers he disregarded, Ignored his own children. Your precepts alone they observed, And kept Your covenant. (10) They shall teach Your laws to Jacob And Your instructions to Israel. They shall offer You incense to savor And whole-offerings on Your altar. (11) Bless, O LORD, his substance, And favor his undertakings. Smite the loins of his foes; Let his enemies rise no more. (12) Of Benjamin he said: Beloved of the LORD, He rests securely beside Him; Ever does He protect him, As he rests between His shoulders. (13) And of Joseph he said: Blessed of the LORD be his land With the bounty of dew from heaven, And of the deep that couches below; (14) With the bounteous yield of the sun, And the bounteous crop of the moons; (15) With the best from the ancient mountains, And the bounty of hills immemorial; (16) With the bounty of earth and its fullness, And the favor of the Presence in the Bush. May these rest on the head of Joseph, On the crown of the elect of his brothers. (17) Like a firstling bull in his majesty, He has horns like the horns of the wild-ox; With them he gores the peoples, The ends of the earth one and all. These are the myriads of Ephraim, Those are the thousands of Manasseh. (18) And of Zebulun he said: Rejoice, O Zebulun, on your journeys, And Issachar, in your tents. (19) They invite their kin to the mountain, Where they offer sacrifices of success. For they draw from the riches of the sea And the hidden hoards of the sand. (20) And of Gad he said: Blessed be He who enlarges Gad! Poised is he like a lion To tear off arm and scalp. (21) He chose for himself the best, For there is the portion of the revered chieftain, Where the heads of the people come. He executed the LORD’s judgments And His decisions for Israel. (22) And of Dan he said: Dan is a lion’s whelp That leaps forth from Bashan. (23) And of Naphtali he said: O Naphtali, sated with favor And full of the LORD’s blessing, Take possession on the west and south. (24) And of Asher he said: Most blessed of sons be Asher; May he be the favorite of his brothers, May he dip his foot in oil. (25) May your doorbolts be iron and copper, And your security last all your days. (26) O Jeshurun, there is none like God, Riding through the heavens to help you, Through the skies in His majesty. (27) The ancient God is a refuge, A support are the arms everlasting. He drove out the enemy before you By His command: Destroy! (28) Thus Israel dwells in safety, Untroubled is Jacob’s abode, In a land of grain and wine, Under heavens dripping dew. (29) O happy Israel! Who is like you, A people delivered by the LORD, Your protecting Shield, your Sword triumphant! Your enemies shall come cringing before you, And you shall tread on their backs. 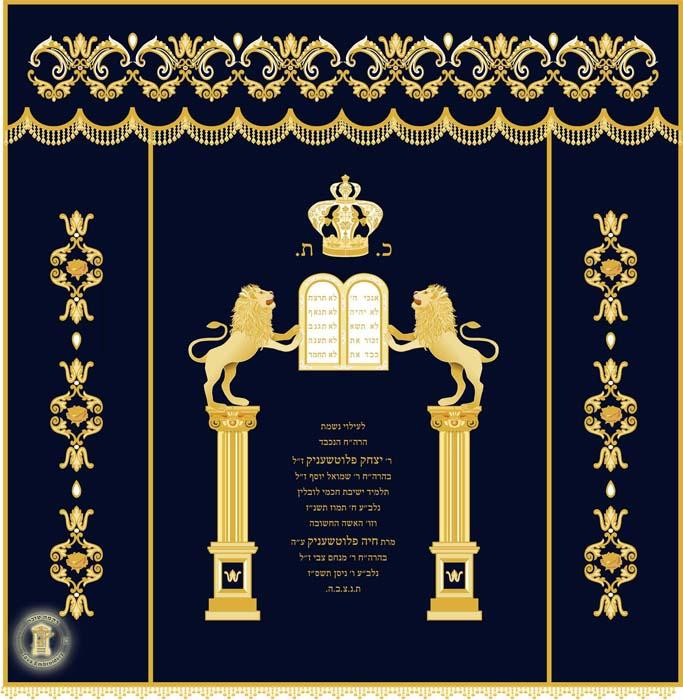