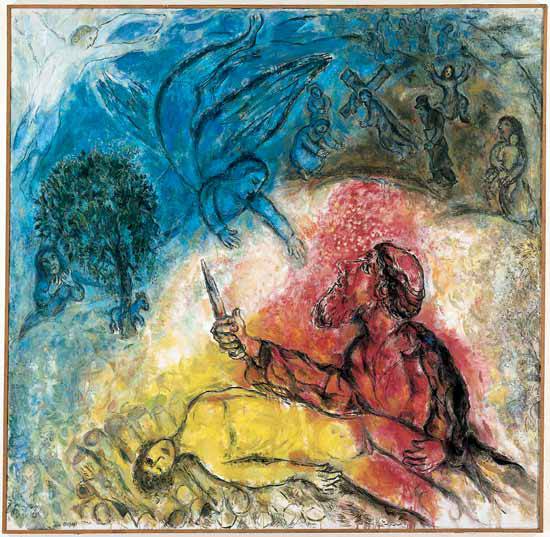 ~ We saw midrashim in our class of art. There, the midrashim gave different answers to the questions: "What was the test about? For whom is the test?" Today we will explore a few narratives about child sacrifice in the Tanakh, and a few midrashim tying up the stories with the Binding.

~ From the simple meaning of the text, what happened to the daughter of Yiftach?

~ How do you understand Yiftach's vow? Besides the daughter that came out, what else could have happened?

~ If the Akedah was to teach opposition to human sacrifice, did Yiftach get the memo?

(1) Jehoram son of Ahab became king of Israel in Samaria in the eighteenth year of King Jehoshaphat of Judah; and he reigned twelve years. (2) He did what was displeasing to the LORD, yet not like his father and mother, for he removed the pillars of Baal that his father had made. (3) However, he clung to the sins which Jeroboam son of Nebat caused Israel to commit; he did not depart from them. (4) Now King Mesha of Moab was a sheep breeder; and he used to pay as tribute to the king of Israel a hundred thousand lambs and the wool of a hundred thousand rams. (5) But when Ahab died, the king of Moab rebelled against the king of Israel. (6) So King Jehoram promptly set out from Samaria and mustered all Israel. (7) At the same time, he sent this message to King Jehoshaphat of Judah: “The king of Moab has rebelled against me; will you come with me to make war on Moab?” He replied, “I will go. I will do what you do: my troops shall be your troops, my horses shall be your horses.” ... (20) And in the morning, when it was time to present the meal offering, water suddenly came from the direction of Edom and the land was covered by the water. (21) Meanwhile, all the Moabites had heard that the kings were advancing to make war on them; every man old enough to bear arms rallied, and they stationed themselves at the border. (22) Next morning, when they rose, the sun was shining over the water, and from the distance the water appeared to the Moabites as red as blood. (23) “That’s blood!” they said. “The kings must have fought among themselves and killed each other. Now to the spoil, Moab!” (24) They entered the Israelite camp, and the Israelites arose and attacked the Moabites, who fled before them. They advanced, constantly attacking the Moabites, (25) and they destroyed the towns. Every man threw a stone into each fertile field, so that it was covered over; and they stopped up every spring and felled every fruit tree. Only the walls of Kir-hareseth were left, and then the slingers surrounded it and attacked it. (26) Seeing that the battle was going against him, the king of Moab led an attempt of seven hundred swordsmen to break a way through to the king of Edom; but they failed. (27) So he took his first-born son, who was to succeed him as king, and offered him up on the wall as a burnt offering. A great wrath came upon Israel, so they withdrew from him and went back to [their own] land.

~ The Moabite king is obviously not Jewish. Who does he sacrifice [there are two possibilities here]? Does it work?

(1) In the seventeenth year of Pekah son of Remaliah, Ahaz son of King Jotham of Judah became king. (2) Ahaz was twenty years old when he became king, and he reigned sixteen years in Jerusalem. He did not do what was pleasing to the LORD his God, as his ancestor David had done, (3) but followed the ways of the kings of Israel. He even consigned his son to the fire, in the abhorrent fashion of the nations which the LORD had dispossessed before the Israelites. (4) He sacrificed and made offerings at the shrines, on the hills, and under every leafy tree.

~ There is no explanation with a story, just a mention. Same below.

(1) Manasseh was twelve years old when he became king, and he reigned fifty-five years in Jerusalem. (2) He did what was displeasing to the LORD, following the abhorrent practices of the nations that the LORD had dispossessed before the Israelites. ... (6) He consigned his sons to the fire in the Valley of Ben-hinnom, and he practiced soothsaying, divination, and sorcery, and consulted ghosts and familiar spirits; ...

(10) He [King Josiah or Yehoshiahu of Judah] also defiled Topheth, which is in the Valley of Ben-hinnom, so that no one might consign his son or daughter to the fire of Molech. (11) He did away with the horses that the kings of Judah had dedicated to the sun, at the entrance of the House of the LORD, near the chamber of the eunuch Nathan-melech, which was in the precincts. He burned the chariots of the sun.

~ King Josiah is credited with immense reforms in the Temple and its environs, all towards getting the Israelites back to God. It is in his reign that Deuteronomy is recovered.

(6) With what shall I approach Ad-nai, do homage to God on high? Shall I approach Him with burnt offerings, with calves a year old? (7) Would Ad-nai be pleased with thousands of rams, with myriads of streams of oil? Shall I give my first-born for my transgression, the fruit of my body for my sins? (8) “He has told you, O man, what is good, and what Ad-nai requires of you: Only to do justice and to love goodness, and to walk modestly with your God.

With what shall I approach Ad-nai, do homage to God on high? [Micah 6:6] - Rabbi Yehoshua of Sichnin said, in the name of Rabbi Levi: even though these words were said regarding Mesha King of Moab, that did the deed and burned his son as a burnt offering, they only apply to Yitzchak, as it says: "Shall I give my first-born for my transgression, the fruit of my body for my sins?" this is about Yitzchak even though the deed was not done, it was accepted as if it was completed, and regarding King Mesha it was not accepted.

~ How is the midrash reading the story of King Mesha?

~ How does this midrash compare and contrast King Mesha's actions to Avraham's?

~ How does the son of Rabbi Yosi, Eleazar, explain the verses in Jeremiah?

~ Does he keep the midrash in context?

תענית ד׳ א:ט׳-י׳
וכתיב (ירמיהו יט, ה) אשר לא צויתי ולא דברתי ולא עלתה על לבי אשר לא צויתי זה בנו של מישע מלך מואב שנאמר (מלכים ב ג, כז) ויקח את בנו הבכור אשר ימלך תחתיו ויעלהו עולה ולא דברתי זה יפתח ולא עלתה על לבי זה יצחק בן אברהם
Taanit 4a:9-10
And it is written, with regard to human sacrifice: “And they have also built the high places of the Ba’al, to burn their sons in the fire for burnt offerings to Ba’al, which I did not command, and I did not speak, nor did it come into My heart” (Jeremiah 19:5). The Gemara interprets each phrase of this verse: “Which I did not command,” this is referring to the son of Mesha, king of Moab. King Mesha sacrificed his son, as it is stated: “Then he took his firstborn son, who would reign after him, and he offered him as a burnt-offering” (II Kings 3:27). “And I did not speak,” this is referring to Jephthah, who sacrificed his daughter as an offering. “Nor did it come into my heart,” this is referring to Isaac, son of Abraham. Although God commanded Abraham to sacrifice Isaac, there was no intent in God’s heart that he should actually do so; it was merely a test.

~ Notice how the previous midrash finds its way to the Gemara.