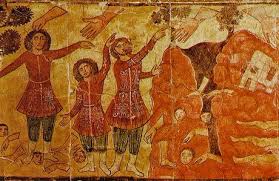 § Apropos the topic of verbal mistreatment, we learned in a mishna there (Kelim 5:10): If one cut an earthenware oven widthwise into segments, and placed sand between each and every segment, Rabbi Eliezer deems it ritually pure. Because of the sand, its legal status is not that of a complete vessel, and therefore it is not susceptible to ritual impurity. And the Rabbis deem it ritually impure, as it is functionally a complete oven.

This first section introduces us to the argument that is about to be expounded on in the following verses. The Sages disagree with Rabbi Eliezar about the ritual purity of this oven. The consequences of the following argument become quite dire. Read slowly and carefully and try to follow along.

Okay, whew! This is a long text with several different parts. Let's break it down.

This is just a spare outline of the plot. We also have the wonderful little episode wherein God smiles and says my children have triumphed over me. What do you think God meant when God said that?

What does it mean for the Sages to say the Torah is not in Heaven? What are they talking about?

Do you think that the argument was out of control? Was Rabbi Eliezar just too stubborn and not willing to accept that they would not agree with his opinion or were the Sages too quick to want to shame Rabbi Eliezar? Was their punishment of him too harsh?

Why do you think that the story ends with Rabbi Eliezar's prayers killing Rabban Gamliel?