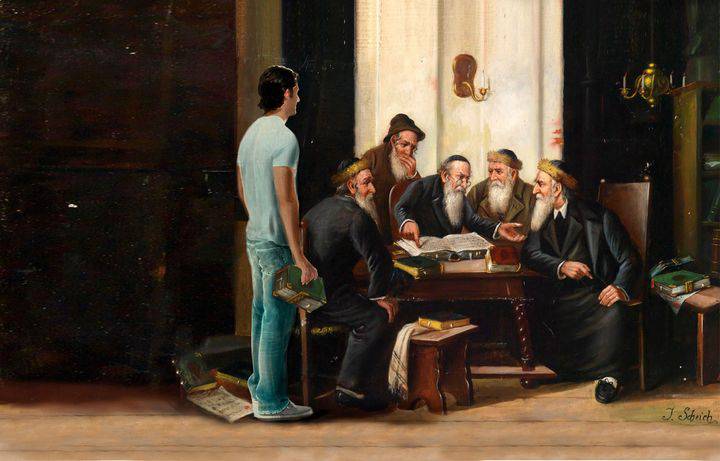 From Temple to Text, From Priest to Sage. Creating A Portable Homeland
משנה אבות ב׳:ח׳

Rabbi Dosa ben Harkinus saw Rabbi Yehoshua in his greatness and declared upon him the pasuk (Yeshayahu 28:9), “Whom shall he teach knowledge and to whom shall he explain the message? To those weaned from milk.” I remember how his mother would bring in his cradle to the Beit Midrash so his ears should cleave to the words of the Torah.

(11) Rabbi Joshua said: an evil eye, the evil inclination, and hatred for humankind put a person out of the world.

בבא בתרא ס׳ ב:י״א-י״ג
תנו רבנן כשחרב הבית בשניה רבו פרושין בישראל שלא לאכול בשר ושלא לשתות יין נטפל להן ר' יהושע אמר להן בני מפני מה אי אתם אוכלין בשר ואין אתם שותין יין אמרו לו נאכל בשר שממנו מקריבין על גבי מזבח ועכשיו בטל נשתה יין שמנסכין על גבי המזבח ועכשיו בטל אמר להם א"כ לחם לא נאכל שכבר בטלו מנחות אפשר בפירות פירות לא נאכל שכבר בטלו בכורים אפשר בפירות אחרים מים לא נשתה שכבר בטל ניסוך המים שתקו אמר להן בני בואו ואומר לכם שלא להתאבל כל עיקר אי אפשר שכבר נגזרה גזרה ולהתאבל יותר מדאי אי אפשר שאין גוזרין גזירה על הצבור אא"כ רוב צבור יכולין לעמוד בה דכתיב (מלאכי ג, ט) במארה אתם נארים ואותי אתם קובעים הגוי כולו
Bava Batra 60b:11-13
§ Having mentioned the prohibition against plastering, which is a sign of mourning over the destruction of the Temple, the Gemara discusses related matters. The Sages taught in a baraita (Tosefta, Sota 15:11): When the Temple was destroyed a second time, there was an increase in the number of ascetics among the Jews, whose practice was to not eat meat and to not drink wine. Rabbi Yehoshua joined them to discuss their practice. He said to them: My children, for what reason do you not eat meat and do you not drink wine? They said to him: Shall we eat meat, from which offerings are sacrificed upon the altar, and now the altar has ceased to exist? Shall we drink wine, which is poured as a libation upon the altar, and now the altar has ceased to exist? Rabbi Yehoshua said to them: If so, we will not eat bread either, since the meal-offerings that were offered upon the altar have ceased. They replied: You are correct. It is possible to subsist with produce. He said to them: We will not eat produce either, since the bringing of the first fruits have ceased. They replied: You are correct. We will no longer eat the produce of the seven species from which the first fruits were brought, as it is possible to subsist with other produce. He said to them: If so, we will not drink water, since the water libation has ceased. They were silent, as they realized that they could not survive without water. Rabbi Yehoshua said to them: My children, come, and I will tell you how we should act. To not mourn at all is impossible, as the decree was already issued and the Temple has been destroyed. But to mourn excessively as you are doing is also impossible, as the Sages do not issue a decree upon the public unless a majority of the public is able to abide by it, as it is written: “You are cursed with the curse, yet you rob Me, even this whole nation” (Malachi 3:9), indicating that the prophet rebukes the people for neglecting observances only if they were accepted by the whole nation.

(3) When Rabbi Eliezer became sick, (they say) it was the eve of the Sabbath. Rabbi Akiva and his companions came in to visit him. He was sleeping in his room, so they sat in the entrance hall. His son Hyrcanus went in to take off his father’s tefillin,1It was right before the Sabbath, and tefillin are not worn on the Sabbath. but his father would not let him, and began to cry. Hycanus came out and said to the sages: My masters, it seems to me that my father is confused. But his father called out: My son, I am not confused – you are confused! For you have not lit the Sabbath candles, for which you can be sentenced to death by divine decree. But I was just wearing tefillin, which is forbidden [to be worn on the Sabbath] only by rabbinic practice. When the sages saw that he was of clear mind (they went in) and sat before him, at a distance of four cubits. They said to him: Rabbi, a circular cushion, a ball, a mannequin, an amulet, and a torn prayer box – what is their status (with regard to whether they can become impure)? He said to them: They can become impure, and you should immerse them in water just as they are. Be very careful to do this, because these are important laws that were said to Moses on Mount Sinai. So they continued asking about ritual purity and impurity, and immersions. They would say: Rabbi, what about this? And he would say: Impure. What about that? And he would say: Pure. In this way he answered all their questions about what was pure and what was impure.
Afterward, Rabbi Eilezer said to the sages: I wonder if the students of this generation will be punished by death at the hands of Heaven. They replied: Rabbi, why? He said to them: Because they have not come and apprenticed with me.
Then he said to Akiva ben Yosef: Akiva, why did you not come to apprentice with me? Rabbi Akiva said: I did not have any time to come. He replied: I wonder if you will die a natural death.
Some say they never said any of this; rather, when Rabbi Eliezer first said this about the students, Akiva’s blood started racing inside of him, and he said: And Rabbi, how will I die? And Rabbi Eliezer said: (Rabbi) Akiva, your death will be the worst of all. Then Rabbi Akiva went and sat before him and said: Rabbi, teach me. Rabbi Eliezer began by teaching him three hundred laws about impure white patches of skin [baheret]. Then Rabbi Eliezer raised both of his arms and lay them on his chest, and said: Oy, these two arms of mine are like two Torah scrolls that will vanish from the world! For if all the seas were ink, and all the reeds were quills, and every person was a scribe, they still could not write down everything that I have read and taught. I apprenticed with the sages in the academy and did not forget (a thing I witnessed), not even a drop out of the sea. I never ceased learning except to dip my quill into ink. I could teach three hundred laws just on the verse, “Do not let a witch live” (Exodus 22:17) – and some say it was three thousand laws! – But no one ever asked me about them except for Akiva ben Yosef, who once said, Rabbi, teach me how they plant squash [through witchcraft], (and how we uproot them). And I answered, With one word, the whole field is filled with squash. So he said to me, Rabbi, you have taught me about how they are planted; now teach me about how they are uprooted. And I said, With one word, they can all be gathered together into one place.
Rabbi Elazar ben Azariah said to him: Rabbi, what about a sandal on a mannequin’s leg? He answered: Pure. In this way he kept answering questions about what was pure and what was impure, until his soul departed in a state of purity. Immediately, Rabbi Elazar ben Azariah tore his clothes and wept. Then he went out and said the sages: My Masters, come and see Rabbi Eliezer, who will be pure in the World to Come (because) his soul left in a state of purity.
After the Sabbath, Rabbi Akiva came and found Rabbi Eliezer being taken in a coffin from Caesarea to Lod. Immediately, he tore his clothes and pulled at his hair until blood began to come out and drip onto the ground. And he screamed and cried and said: Woe is me, my master, for I have lost you! Woe is me, my master, for I have lost you! My master, you have left this whole generation like an orphan! At the head of his funeral line, he said, “My father, my father, the chariot of Israel and all its horsemen!” (II Kings 2:12). You have left money for me, and I have no table [i.e., money changer] to exchange them.

The yeshiva of Rabbi Eliezer was shaped like an arena, and there was one stone reserved for him to sit on. One time, Rabbi Yehoshua entered the yeshiva and began kissing the stone. He said, "this stone is like Mt. Sinai, and the one who sits on it is like the ark of the covenant."