Conducting an Argument for the Sake of Heaven: A Lesson for Yitzhak Rabin Memorial Day
NI

Yitzhak Rabin was born in Israel in 1922, and as a young man growing up in the days of the British Mandate in Israel, he joined an underground army unit, the Palmach. After the establishment of the State of Israel, Rabin joined the Israel Defense Forces, serving for twenty-seven years before finally leading the army as chief of staff during the 1967 Six-Day War. Rabin served as prime minister from 1974 to 1977 and again from 1992 to 1995. Some of the major events in his career included ordering Operation Entebbe, signing the Oslo Accords, receiving the Nobel Peace Prize together with Yasser Arafat and Shimon Peres, and signing a peace treaty with Jordan. The Israeli public was very divided about the Oslo Accords and the concept of trading land for peace. This controversy culminated in the assassination of Prime Minister Yitzhak Rabin on November 4, 1995 while attending a peace rally in Tel Aviv.

The assassination of Yitzhak Rabin shocked the Israeli public and Jews around the world, leading to questions such as: how could something like this have happened and how could it have been prevented?

In this lesson, we will analyze a photograph of the wall near Tel Aviv’s Kikar Malchei Yisrael, later renamed Rabin Square, where Yitzhak Rabin was assassinated in order to learn about the atmosphere in Israel before the assassination and the response after.

Assassination is the most extreme outcome of uncivil discourse and anti-democratic actions. While it is extremely rare, hateful speech and a lack of respect on an interpersonal or community level are not so rare. At the end of this lesson you will have the opportunity to reflect on relationships with your friends and family and within your own community and to consider how best to learn from the past in order to support healthy civil discourse.

Study the photograph and answer the questions below. 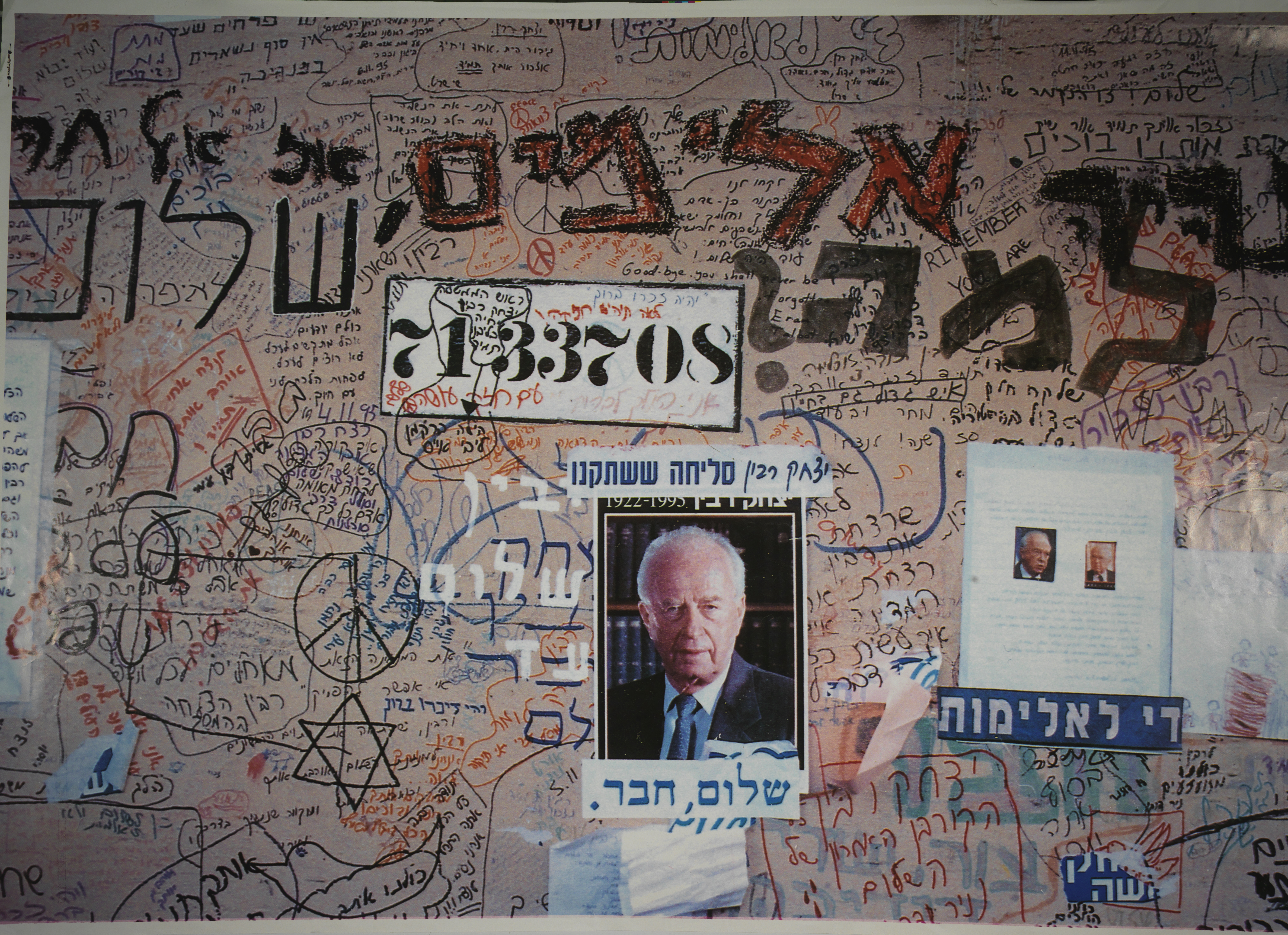 Yitzhak Rabin, Sorry That We Were Silent, 1995

Reading Between the Lines

What Do Jewish Sources Say about How to Disagree?

Disagreements are a healthy part of Jewish life.
The Talmud is composed of discussions, disagreements, and arguments about the proper interpretation of Jewish law and tradition. Some of the arguments are seen in a positive light, while others are not. What is the difference between a constructive argument (called an argument for the sake of heaven) and a destructive argument (called an argument that is not for the sake of heaven)?

The following texts and articles look for the key differences between the two types of arguments and provide guidelines for arguing for the sake of heaven.

The Rabbis characterize Korach and his followers as people who wanted power for themselves and weren’t concerned about the community. Korach therefore epitomizes an argument that is not for the sake of heaven.

In the Talmud text below, the Rabbis explain why the disagreements between Beit Hillel and Beit Shammai (the schools of Hillel and Shammai) were for the sake of heaven.

(The literal English translation is written in bold and Rabbi Adin Steinsaltz’s explanations are written in regular print.)

Rabbi Jonathan Sacks discusses the nature of disagreement in the excerpt below. He begins with the idea that no one person has the whole truth.

Read the passage and answer the question below.

Truth on earth is not, nor can be, the whole truth. It is limited, not comprehensive; particular, not universal. When two propositions conflict it is not necessarily because one is true the other false. It may be, and often is, that each represents a different perspective on reality, an alternative way of structuring order, no more and no less commensurable than a Shakespeare sonnet, a Michelangelo painting or a Schubert sonata. In heaven there is truth; on earth there are truths. Therefore, each culture has something to contribute. Each person knows something no one else does. The sages said: 'Who is wise? One who learns from all men' - The wisest is not one who knows himself wiser than others: he is one who knows all men have some share of the truth, and is willing to learn from them, for none of us knows all the truth and each of us knows some of it.

Arguments that are not for the sake of heaven can come from any side of an issue. We thus all have to make sure not to cross the line into hateful and destructive arguments.

Look at each example and answer the following questions:

Photograph taken in 1993 from the collection of the National Library of Israel. 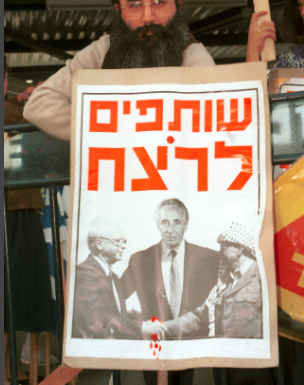 News report about a protest against the First Lebanon War.
Protesters are chanting “Begin is a murderer,” and a sign reads: “Thus far, 501 soldiers have been killed in Lebanon.” The protesters changed the number with each new death of a soldier. The sign stood outside Prime Minister Menachem Begin’s residence.

Putting it all together

Political assassination is the most extreme outcome of an argument not for the sake of heaven.

Read the text written by journalist Yair Sheleg reflecting on what the events of the Rabin Memorial Day mean on a societal level and answer the ensuing questions.

We must bear in mind that the terrible tragedy that befell Israeli society on November 4, 1995 was not just the death of a beloved leader... The terrible tragedy was that on that day there was a political assassination of an Israeli Prime Minister; on that day, an ideological fanatic with an opposing view thought it was legitimate to kill an elected prime minister and attempted to resolve a legitimate ideological debate by means of murder.

Rather than commemorating the death of Rabin the individual or the blow to the peace process on this day each year, Israeli society should have been commemorating the terrible, unprecedented blow to democracy—the only means that we have for creating a shared society. The day should not have been observed as "Rabin Memorial Day," and not even as the "Memorial Day for the Assassination of Prime Minister Yitzhak Rabin," but as "Israeli Democracy Day": a day in which generations of Israelis would discuss the nature and character of Israeli democracy, the dangers that confront it, and ways to deal with those threats.