(1) The Ark of the LORD remained in the territory of the Philistines seven months. (2) Then the Philistines summoned the priests and the diviners and asked, “What shall we do about the Ark of the Lord? Tell us with what we shall send it off to its own place.” (3) They answered, “If you are going to send the Ark of the God of Israel away, do not send it away without anything; you must also pay an indemnity to Him. Then you will be healed, and He will make Himself known to you; otherwise His hand will not turn away from you.” (4) They asked, “What is the indemnity that we should pay to Him?” They answered, “Five golden hemorrhoids and five golden mice, corresponding to the number of lords of the Philistines; for the same plague struck all of you and your lords. (5) You shall make figures of your hemorrhoids and of the mice that are ravaging your land; thus you shall honor the God of Israel, and perhaps He will lighten the weight of His hand upon you and your gods and your land. (6) Don’t harden your hearts as the Egyptians and Pharaoh hardened their hearts. As you know, when He made a mockery of them, they had to let Israel go, and they departed. (7) Therefore, get a new cart ready and two milch cows that have not borne a yoke; harness the cows to the cart, but take back indoors the calves that follow them. (8) Take the Ark of the LORD and place it on the cart; and put next to it in a chest the gold objects you are paying Him as indemnity. Send it off, and let it go its own way. (9) Then watch: If it goes up the road to Beth-shemesh, to His own territory, it was He who has inflicted this great harm on us. But if not, we shall know that it was not His hand that struck us; it just happened to us by chance.” (10) The men did so. They took two milch cows and harnessed them to the cart, and shut up their calves indoors. (11) They placed the Ark of the LORD on the cart together with the chest, the golden mice, and the figures of their hemorrhoids. (12) The cows went straight ahead along the road to Beth-shemesh. They went along a single highroad, lowing as they went, and turning off neither to the right nor to the left; and the lords of the Philistines walked behind them as far as the border of Beth-shemesh. (13) The people of Beth-shemesh were reaping their wheat harvest in the valley. They looked up and saw the Ark, and they rejoiced when they saw [it]. (14) The cart came into the field of Joshua of Beth-shemesh and it stopped there. They split up the wood of the cart and presented the cows as a burnt offering to the LORD. A large stone was there; (15) and the Levites took down the Ark of the LORD and the chest beside it containing the gold objects and placed them on the large stone. Then the men of Beth-shemesh presented burnt offerings and other sacrifices to the LORD that day. (16) The five lords of the Philistines saw this and returned the same day to Ekron. (17) The following were the golden hemorrhoids that the Philistines paid as an indemnity to the LORD: For Ashdod, one; for Gaza, one; for Ashkelon, one; for Gath, one; for Ekron, one. (18) As for the golden mice, their number accorded with all the Philistine towns that belonged to the five lords—both fortified towns and unwalled villages, as far as the great stone on which the Ark of the LORD was set down, to this day, in the field of Joshua of Beth-shemesh. (19) [The LORD] struck at the men of Beth-shemesh because they looked into the Ark of the LORD; He struck down seventy men among the people [and] fifty thousand men. The people mourned, for He had inflicted a great slaughter upon the population. (20) And the men of Beth-shemesh asked, “Who can stand in attendance on the LORD, this holy God? And to whom shall He go up from us?” (21) They sent messengers to the inhabitants of Kiriath-jearim to say, “The Philistines have sent back the Ark of the LORD. Come down and take it into your keeping.”

(1) The men of Kiriath-jearim came and took up the Ark of the LORD and brought it into the house of Abinadab on the hill; and they consecrated his son Eleazar to have charge of the Ark of the LORD. (2) A long time elapsed from the day that the Ark was housed in Kiriath-jearim, twenty years in all; and all the House of Israel yearned after the LORD.

Example of the ancient practice of the Makkah being included IN the Refua:
משנה יומא ח׳:ו׳

(6) If one is seized by a ravenous hunger, they feed him even unclean things until his eyes light up [and he returns to health]. If one was bit by a mad dog, they do not feed him the lobe of its liver. But Rabbi Matia ben Harash permits it. Moreover Rabbi Matia ben Harash said: if one has pain in his throat, they may drop medicine into his mouth on Shabbat, because it is a possibility of danger to human life and every potential danger to human life overrides Shabbat. 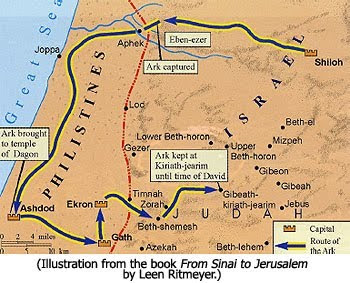 Example of the K-L-A root being used to mean "imprison":
במדבר י״א:כ״ח

Numbers 11:28
(28) And Joshua son of Nun, Moses’ attendant from his youth, spoke up and said, “My lord Moses, restrain them!”
When is the wheat harvest?
שמות ל״ד:כ״ב

Exodus 34:22
(22) You shall observe the Feast of Weeks, of the first fruits of the wheat harvest; and the Feast of Ingathering at the turn of the year.
Created with