Tisha B'Av 101 Why is this the Saddest Day of the Year?

Tisha B'Av 101 Why is this the Saddest Day of the Year?
SE
by Sefaria Education 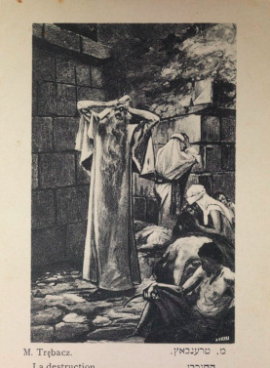 Why is Tisha B'Av the Saddest Day of the Year?

Tisha B'Av, the ninth day of the Hebrew month of Av, is the communal day of mourning in the Jewish calendar. While it’s most commonly remembered as the day of destruction for the Temples in Jerusalem, the Mishnah in Taanit tells us there were actually a total of five tragic events that occurred on the ninth of Av.

There were five events that happened to our ancestors on the seventeenth of Tammuz and five on the ninth of Av...On the ninth of Av it was decreed that our ancestors should not enter the land, The Temple was destroyed the first and the second time, Betar was captured, And the city was plowed up. When Av enters, they limit their rejoicing.

Dr. Joshua Kulp, in Mishnah Yomit, explains the events referred to in the Mishnah.

There were five events that occurred on the ninth of Av, which besides Yom Kippur is the only major fast in the Jewish calendar. 1) After the people of Israel believed the bad report of the ten spies over that of Joshua and Caleb, God decreed that no one over the age of twenty would make it into the land of Canaan (see Numbers 14:29). 2 +3) Both Temples were destroyed, the first by the Babylonians in 586 B.C.E. and the second by the Romans in 70 C.E. The first Temple was set aflame on the ninth and burnt on the Tenth see Jeremiah 52:12-13. 4) Betar, an important Jewish stronghold during the Bar-Kochba revolt fell to the Romans. 5) After the Bar Kochba rebellion was defeated, the Romans plowed over the city, destroying any remaining buildings and quashing any hopes that the Temple would be rebuilt. 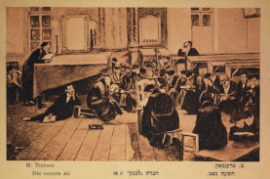 How Do We Mourn?

The Rabbis of the Talmud discuss Tisha B'Av mourning practices. Most of the customs are the same as those for someone mourning for a relative. The source below presents the prohibitions, which include not studying any Torah. The discussion of this restriction is especially interesting; the rabbis assume that Torah brings joy, and so it's too much fun to be a Tisha B'Av activity.

One of the ways to commemorate Tisha B'Av is to read the book of Lamentations (Eicha). Eicha describes the destruction of the First Temple in 586 BCE by the Babylonians. You can read the book of Eicha, along with seven commentaries, on Sefaria.

Why were the First and Second Temples destroyed?

A tremendous national tragedy leads us to ask the question: Why did this happen to us?

The discussion in Yoma seeks to find reasons for the destruction of the First Temple in 586 BCE and the Second Temple, at the hands of the Romans, in 70 CE. 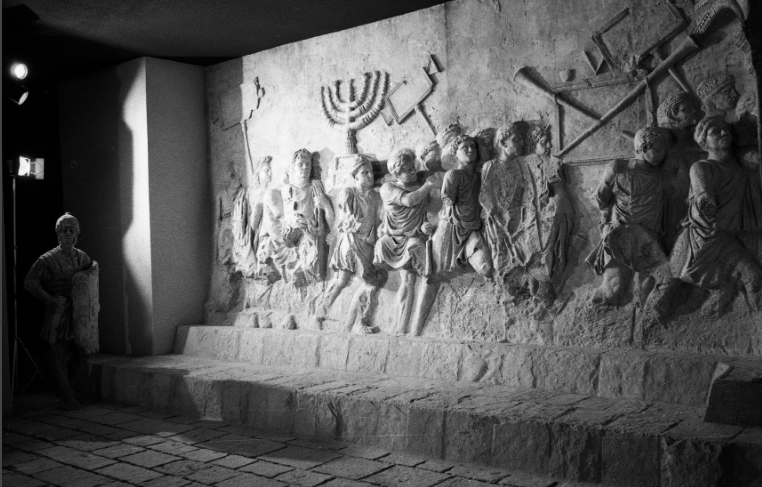 Replica of the frieze on the Arch of Titus in Rome depicting the exile of the Jews after the destruction of the Second Temple. The menorah and other sacred objects are being taken from the Temple. The frieze became a symbol of the diaspora.

The photograph was taken at the opening of the Beit Hatfutzot muesum in Ramat Aviv.

Kamtza and Bar Kamtza - A story of baseless hatred

The classic story explaining the reason for the destruction of the Second Temple continues to be relevant today. How do we treat each other? How do we talk to each other? How can we promote unity among the entire Jewish community?

The story, which took place over 2,000 years ago among men whose identity is only speculated about but not certain, is relatable to modern readers. An awkward social situation which leads to embarrassment and stubbornness is timeless.

The Gemara explains: Jerusalem was destroyed on account of Kamtza and bar Kamtza. This is as there was a certain man whose friend was named Kamtza and whose enemy was named bar Kamtza. He once made a large feast and said to his servant: Go bring me my friend Kamtza. The servant went and mistakenly brought him his enemy bar Kamtza. The host said to him: No, you must leave. Bar Kamtza said to him: I will give you money for half of the feast; just do not send me away. The host said to him: No, you must leave. Bar Kamtza then said to him: I will give you money for the entire feast; just let me stay. The host said to him: No, you must leave. Finally, the host took bar Kamtza by his hand, stood him up, and took him out. After having been cast out from the feast, bar Kamtza said to himself: Since the Sages were sitting there and did not protest the actions of the host, although they saw how he humiliated me, learn from it that they were content with what he did. I will therefore go and inform [eikhul kurtza] against them to the king. He went and said to the emperor: The Jews have rebelled against you. The emperor said to him: Who says that this is the case? Bar Kamtza said to him: Go and test them; send them an offering to be brought in honor of the government, and see whether they will sacrifice it. The emperor went and sent with him a choice three-year-old calf. While bar Kamtza was coming with the calf to the Temple, he made a blemish on the calf’s upper lip. And some say he made the blemish on its eyelids, a place where according to us, i.e., halakha, it is a blemish, but according to them, gentile rules for their offerings, it is not a blemish. Therefore, when bar Kamtza brought the animal to the Temple, the priests would not sacrifice it on the altar since it was blemished, but they also could not explain this satisfactorily to the gentile authorities, who did not consider it to be blemished. The blemish notwithstanding, the Sages thought to sacrifice the animal as an offering due to the imperative to maintain peace with the government. Rabbi Zekharya ben Avkolas said to them: If the priests do that, people will say that blemished animals may be sacrificed as offerings on the altar. The Sages said: If we do not sacrifice it, then we must prevent bar Kamtza from reporting this to the emperor. The Sages thought to kill him so that he would not go and speak against them. Rabbi Zekharya said to them: If you kill him, people will say that one who makes a blemish on sacrificial animals is to be killed. As a result, they did nothing, bar Kamtza’s slander was accepted by the authorities, and consequently the war between the Jews and the Romans began. Rabbi Yoḥanan says: The excessive humility of Rabbi Zekharya ben Avkolas destroyed our Temple, burned our Sanctuary, and exiled us from our land.

What began as a misunderstanding, grew into terrible hatred. On an individual level, the host didn’t consider Bar Kamtza’s embarrassment above his own personal hatred. This was followed by the Sages, who publicly sanctioned the hatred by watching the incident without rebuke. Bar Kamtza’s humiliation, which could have been prevented, led him to betray the Jewish community to the Romans.

The second half of the story illustrates another type of decision which led to the destruction. The priest’s choice to be stringent regarding the rules of sacrifice came at the expense of the community. The story teaches that treating all people with respect and focusing on the needs of the community must be hallmarks of Judaism.


Beyond the destruction of the Temple

How do we express our grief while moving forward with our lives? This Talmudic text presents a balance that allowed the Jewish people to continue after the Temple was destroyed and provides a model that can also be emulated when we are faced with personal loss.

Our rabbis taught: When the Temple was destroyed, there multiplied in Israel those who separated themselves from eating meat and drinking wine. R. Joshua addressed them. He said to them: My children, why are you not eating meat, and why are you not drinking wine? They said to him: How can we eat meat, which we would offer sacrifices on the altar, and now is desolate? How can we drink wine, which was poured out on altar, and now is desolate? He said to them: If so, we shouldn't eat bread, for grain offerings have ceased. [They responded] we can eat produce. [R. Joshua said]: We should not eat produce, for the first fruits offering has ceased. [They responded]: We can eat other fruits. [He said]: We should not drink water, for the water libations have ceased. They were silent. He said to them: My children, come hear and I will say to you: It is not possible to not mourn at all, for the decree has already been decreed. But it is also impossible to mourn too much, for we do not decree a law on the community that most of the community cannot live with...Rather this is what the sages said: A person plasters his house with plaster, but he leaves a little bit unfinished...A person makes all the needs of his meal, but he leaves a little bit out.... A woman makes all of her jewelry, but she leaves a little bit off...As it says, "If I forget you Jerusalem, let my right hand be forgotten, If I don't remember you, let my tongue cling to the roof of my mouth. If I do not set Jerusalem at the head of my celebration." What is meant by the "head of my celebration"? R. Yitzchak said: This is the ashes on the heads of bridegrooms.

R. Yishmael ben Elisha said:...From the day that the evil empire, which makes evil and harsh decrees against us, took over, and forces us to stop learning Torah and observing commandments, and does not allow us to celebrate the week of the son, it would make sense for use to decree that we should not marry women and have children, and the descendants of Abraham would desist on their own. [But since we cannot do this] leave Israel alone, better they act without intention than with intention.

This poignant Talmudic story illustrates how difficult it was for the Jews at this time to end their mourning of the destruction of the Temple, and, actually, Judaism as they knew it. How could they eat meat or drink wine as if nothing had happened? Rabbi Joshua, who treats them with compassion and love as he calls them “my children”, says that while it’s impossible to stop mourning altogether, it’s also dangerous to mourn too much. He presents a new paradigm. Continue living your life, but keep little reminders of the loss. This, in fact, is what we do - even today.

For additional ideas about Tisha B'av, browse over 50 source sheets in the Sefaria library.

Add your source sheet to the library by tagging it "Tisha B'av" and making it public. Adding tags and a description makes it easier for other Sefaria users to find and understand your work. 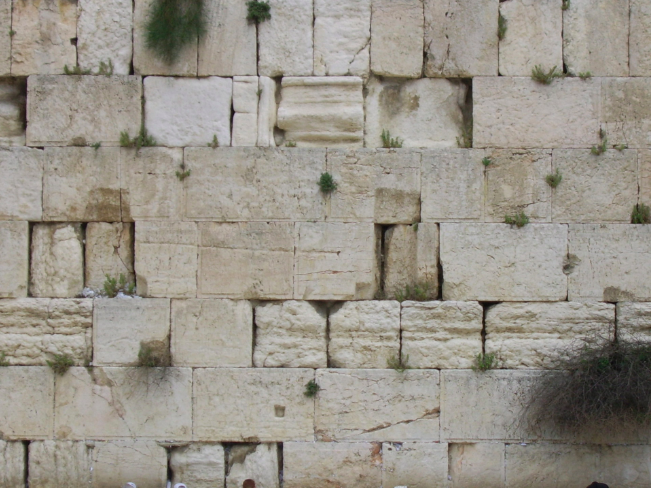