Raoul Wallenberg and the Midwives
NI

During the Holocaust, attitudes towards Jews by German citizens and the citizens of the countries occupied by Germany ranged mostly between ambivalence and hostility. Small numbers of individuals, however, were concerned by what they were seeing around them, and some even risked their lives to help their Jewish neighbours.

In this lesson we are going to look at examples of acts of bravery displayed by the Righteous Among the Nations, as they are designated by Yad Vashem, and look at a biblical precedent for their actions.

Read the translation of the text, zoom in to explore the details, and then answer the questions below. 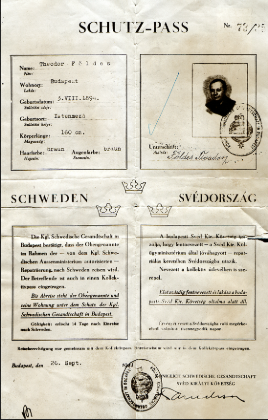 Observing – What can you learn from observing the item?

The first step of analysing a document is to observe the details closely.

Next, use prior knowledge and analytical skills, reference books, and online research to understand the context and meaning of the item.

Connecting
What does the item mean to you? What are your impressions of the item? How does this item connect to your own life and experiences?

Throughout history there have been individuals who have been prepared to endanger themselves in order to save Jews.

Read the story from the book of Shemot (Exodus) and answer the questions below.

Exodus 1:15-21
(15) The king of Egypt spoke to the Hebrew midwives, one of whom was named Shiphrah and the other Puah, (16) saying, “When you deliver the Hebrew women, look at the birthstool: if it is a boy, kill him; if it is a girl, let her live.” (17) The midwives, fearing God, did not do as the king of Egypt had told them; they let the boys live. (18) So the king of Egypt summoned the midwives and said to them, “Why have you done this thing, letting the boys live?” (19) The midwives said to Pharaoh, “Because the Hebrew women are not like the Egyptian women: they are vigorous. Before the midwife can come to them, they have given birth.” (20) And God dealt well with the midwives; and the people multiplied and increased greatly. (21) And because the midwives feared God, He established households for them.

Who Were the Midwives?

In verse 15, the midwives are described as מְיַלְּדֹת הָעִבְרִיֹּת - miyaldot haivriot- which can be translated either as “the Jewish midwives” or “the midwives for the Jews.”

According to Rashi, who were the midwives?
Compare this to Shadal’s commentary.

Fear of God or Not…

For another clue as to what the phrase “יראת אלקים” (yirat Elokim, fear of God) means, let’s look at an example where the Torah says that a group of people don’t have this fear of God.

Deuteronomy 25:17-19
Remember what Amalek did to you on your journey, after you left Egypt— how, undeterred by fear of God, he surprised you on the march, when you were famished and weary, and cut down all the stragglers in your rear. Therefore, when the LORD your God grants you safety from all your enemies around you, in the land that the LORD your God is giving you as a hereditary portion, you shall blot out the memory of Amalek from under heaven. Do not forget!

According to Shadal’s interpretation of verse 15, what do the midwives and Amalek have in common?
What does this say about the characteristic of fear of God?

What is fear of God?

One way of translating fear of God is moral courage, namely, the ability to know right from wrong and to act on it even in difficult circumstances.

Fear of God requires doing the right thing, even if it is difficult or dangerous. In the context of the biblical source, it also means that doing the right thing is what is important to God and that this is done simply because it is right and not in expectation of a reward.

Centropa is an organisation that interviews elderly Jews still living in 15 countries in Central and Eastern Europe, the former Soviet Union, the Baltics, and the Balkans. They have collected examples of people who stood up, at risk of their lives, to save Jews during the Holocaust. Click here to read about these inspirational people.

The picture below is from Matilde Kalef Cerge, who credits Father Tumpej for saving both her and her sister’s lives. 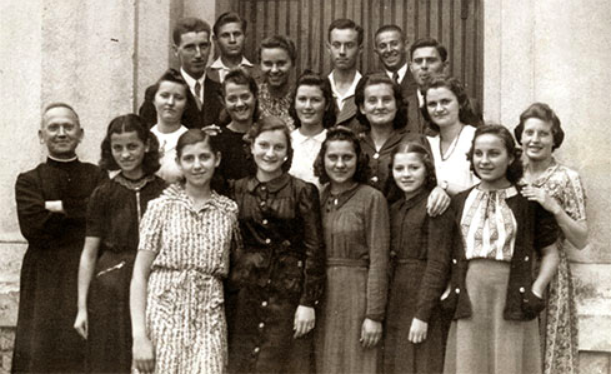 Matilda Cerge and others with Father Andrej Tumpej

“I couldn’t change my name back. Father Tumpej didn’t just give me a name. By saving me, he gave me a life.”

After they had taken away almost all of our family, my mother, completely beside herself, took us to [the Belgrade suburb of] Banovo Brdo, where she begged a Catholic priest, Andrej Tumpej to take us in. Father Tumpej gave us false papers as the out-of-wedlock children of our mother, Antonija Ograjensek, [her maiden name] so that we would have some documents. My new name was Lidija Ograjensek and my sister's was Breda; her birth name was Rahela.

Next to the church there was an apartment where these nuns lived. We got two beds in a room and were there for three months. Just my sister and I. They took us in and then we couldn't go anywhere. When we were with the nuns we were the only children hiding there. They were very polite. And most importantly, they were thrilled because we knew the Old Testament because as Jewish children, we had learned the Old Testament in our Hebrew school. There was no pressure to convert.

Later Father Tumpej made it possible for us to go to a regular school, and the school director accepted us knowing we didn't have the kinds of school documents we would need from our former school. He simply accepted us on his personal responsibility, meaning, of course, he must have known.

Andrej Tumpej was an exceptional man. He hid Dr. Vajs, a pediatrician who had gone over to the Partizans, at some point. He also hid two other Jewish girls…but when he was helping them escape, someone recognized them. They were caught and taken away. I have no idea what happened to them; I’m sure it was very bad.

After this the Germans locked up Father Tumpej. When he was in prison a German asked him, 'How could you dare to do this, to hide Jewish girls?' and he answered, 'And tomorrow if you were in that kind of situation I would do the same for you.' He was a man in the true sense of the word. Exceptional.

Matilda and Rahela Kalef grew up in a large and wealthy Sephardi family in Belgrade. The Germans invaded in 1941 and soon after, almost all of their relatives – from children to aged grandparents –were taken away and murdered.

Creating
Use what you have learned to create something new.

Choose from one of the following options: