In each and every generation, a person is obligated to see himself as if he left Egypt.

Lo ti-anun -- do not afflict them, because you remember what it was like to be in Mitzrayim. Familiar shoresh -- HaLachma Anya.

But that introduction to the heart of our seders is also an invitation -- Kol Dichfin yeiti v'yeichol. As an act of tzedakah, this poses a problem. What do we know about performing tzedakah?

(3) Charity should be given with a friendly countenance, with joy, and with a good heart; the giver should, sympathize with the poor man, and should speak words of comfort to him. If he gives with a displeased countenance he loses his reward.

(5) Men once sated must hire out for bread; Men once hungry hunger no more... (8) He raises the poor from the dust, Lifts up the needy from the dunghill, Setting them with nobles.

Translation by Rabbi Mark B Greenspan

Ha lachma anya: There are a number of difficulties in this passage. First, the passage should have begun with the words, “All who are hungry come and eat.” Second, it would have been more appropriate to say, “This is the bread of affliction” when everyone is sitting around the table paying attention. There are other issues which Don Isaac Abarbanel and the Ma’aseh Adonai spell out.
In Yoreh Deah 249:3 we learn that when giving tzedakah, one should do so with a cheerful countenance, joyfully and with a full heart. One should empathize with the needy person in his misery and speak to him with consolation. If one greets him with an angry countenance then he loses all merit for the mitzvah of giving tzedakah even if he gives him money or food. This is what the prophet Isaiah wrote: “and you offer your compassion to the hungry and satisfy the famished creature.” This means that one should first speak to the needy person and ask him about his troubles. One should not humiliate him since the world is a turning wheel – the needy person who sits on the dung heap may eventually sit with princes. He should placate the poor person and encourage him to come to his house. But once the meal begins, he should not speak about the other’s poverty; rather he should treat him as if he were the host’s best friend and happy to be with him. They should eat and drink happily together. When the poor guest prepares to leave, once again his host should console him with soft words and tell him that God will help him and that he will see better times just as we all wait for the final redemption.
These are the things that the host should do who invites the needy to join him at the Seder. First, he should say, “This is the bread of affliction which our ancestors ate in the land of Egypt.” By saying “In Egypt,” instead of saying, “When we went forth from Egypt.” David Abudraham relates that when his contemporary was imprisoned in India they fed him unleavened bread that did not get moldy or stale. One can go on to explain that the Egyptians did not allow the Israelites to bake regular bread in Egypt – but eventually the unleavened bread became a symbol of freedom. In this way, one can remove the mask of humiliation from the poor person’s face. He does not have to feel he has come to a rich person’s house this night – we all eat the bread of poverty and affliction. Rather we should make the person feel at home and accepted by saying: “All who are in need come and celebrate the Pesach.” He does not have to feel that he is eating the bread of humiliation. And when he prepares to leave, speaking consolingly to him and say, “This year we are here – next year in the land of Israel!” That is, he can anticipate God’s redemption land of Israel just as we do. 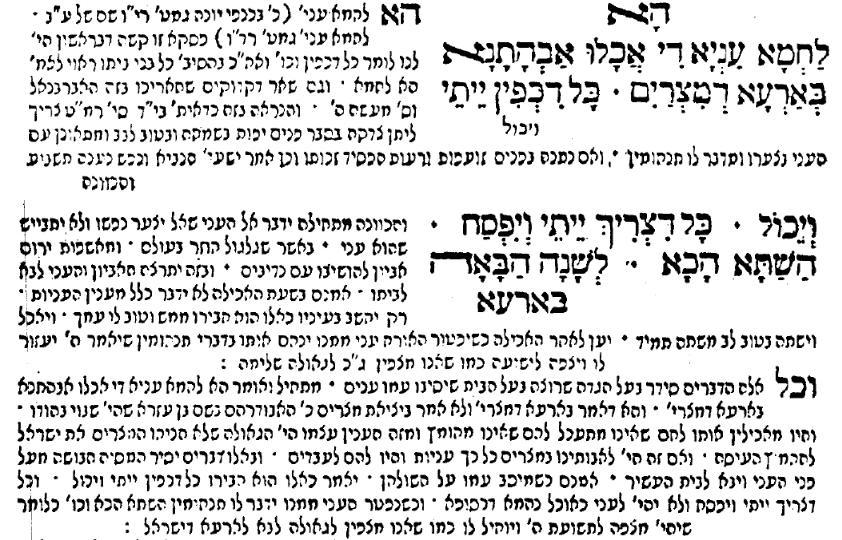 (2) Ill-gotten wealth is of no avail, But giving charity saves from death.

(15) When I give tzedakah, then will I behold Your face; awake, I am filled with the vision of You.

It is taught in a baraita that Rabbi Yehuda says: Great is charity in that it advances the redemption, as it is stated: “So said the Lord, uphold justice and do charity, for My salvation is near to come, and My righteousness to be revealed” (Isaiah 56:1).

It is related that Rabbi Elazar would first give a peruta to a poor person and only then would he pray. He said: As it is written in the same verse: “I will behold Your face through charity.”

(The Gemara asks: What is the meaning of that which is written: “I will be satisfied, when I awake, with your likeness”? Rav Naḥman bar Yitzḥak says: These are Torah scholars, who in pursuit of their studies banish sleep from their eyes in this world, and the Holy One of Blessing, satiates them with the radiance of the Shechina in the World-to-Come.)