Origins of The Seder: From Roman Raunchiness to Jewish Holiness Based on: The Origins of the Seder By:Rabbi Prof. David Golinkin

Origins of The Seder: From Roman Raunchiness to Jewish Holiness Based on: The Origins of the Seder By:Rabbi Prof. David Golinkin
SK
by SHALOM KANTOR

(2) That you may recount in the hearing of your sons and of your sons’ sons how I made a mockery of the Egyptians and how I displayed My signs among them—in order that you may know that I am the LORD.”

(1) And the LORD spoke unto Moses and Aaron in the land of Egypt, saying: (2) ’This month shall be unto you the beginning of months; it shall be the first month of the year to you. (3) Speak ye unto all the congregation of Israel, saying: In the tenth day of this month they shall take to them every man a lamb, according to their fathers’houses, a lamb for a household; (4) and if the household be too little for a lamb, then shall he and his neighbour next unto his house take one according to the number of the souls; according to every man’s eating ye shall make your count for the lamb. ...

(25) And when you enter the land that the LORD will give you, as He has promised, you shall observe this rite.

And it will be, when your children say to you: What does this service mean to you?

Then say: it is the Pesach offering to God, who passed over the houses of the Israelites in Egypt, dealing a blow to the Egyptians and rescuing our houses. The people did homage and bowed down.

(8) And you shall explain to your son on that day, ‘It is because of what the LORD did for me when I went free from Egypt.’

(20) Tomorrow, when your child asks you: What are the precepts, the laws and the regulations that the Holy One our God commanded you? (21) Then you are to say to your child: we were slaves to Pharaoh in Egypt, and the Holy One took us out of Egypt with a strong hand; (22) God placed signs and wonders against Egypt and Pharaoh and all his house, before our very eyes.

The Seder Rituals and Vocabulary

There are a number of linguistic consistencies throughout the two types of literature that we are comparing: Rabbinic and Greek/Roman historical and we will note them as we continue.

One of the key characters that appears in both pieces of literature is the Shamash or servant who mixed the wine with water and served it, brought in the matzah, hazeret and haroset, and waited on the needs of the diners throughout the meal.

“the slave set before us.sweetest morsel of entrails ”

“men still feasted sitting, but gradually they slid from chairs to couches , taking as their ally relaxation and ease”

one must recline on one’s left arm while eating. 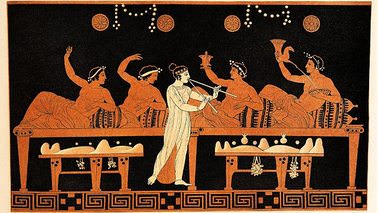 Many Cups of Wine

one should honor the gods to the extent of three cups of wine (Stein, p. 17)Mishnah Pesachim (10:1) You must not decrease from the four cups of wine, even if he is one who takes money from the community fund.

Such pouring of the water was done before and after eating

Socrates, in Plato's Symposium, is washed by a servant to make him ready for eating.

the servant poured water over the hands of those reclining at a Jewish banquet.

Athenaeus (ca. 200 C.E.) a contemporary of Rabbi Judah HaNasi (the redactor of the Mishnah) mentions lettuce seven times in his “Learned Banquet”, an encyclopedic compilation about Greek and Roman food and drink.

The servant brings hazeret, (which is lettuce) before his master, who dips it (in salt water or other liquids) until the main course is served.

Athenaeus (ca. 200 C.E.) describes similar dishes at length, and discusses whether they should be served before or after dinner.

Heracleides of Tarentum, a physician of the first century B.C.E., recommended eating these dishes as appetizers rather than as dessert

The servant serves haroset with the meal. The tanna kamma (=the first or anonymous rabbi in the mishnah) says it is not a mitzvah, while R. Eliezer bar Zadok says it is a mitzvah .

Sandwich bread eaten with lettuce is a part of the Greco Roman menu - often served with skewers of meat.

Similarly, the Greeks and Romans used to eat sandwich bread with lettuce

“one may not add an afikoman after the paschal lamb”.

The Tosefta, Bavli and Yerushalmi give three different interpretations of this word. In 1934, Prof. Saul Lieberman proved that the correct meaning is “one should not stand up from this eating group and join that eating group”

He refers to the Greek word epikomon – at the climax of the symposium the revelers used to leave their house and barge into another house and force the family to join in their merry-making. The mishnah is saying that this particular Hellenistic custom may not be done after eating the paschal lamb

The Literary Forms of the Seder and the Haggadah

Since Plato, a literary species, the so-called Symposia, had developed in which a description was given of a banquet held by a few learned men who had met at a friend’s house to discuss scientific, philosophical, ethical, aesthetical, grammatical, dietetic and religious themes over a glass, and very often over a barrel of wine, after they had dined together.

A symposium is a communion of serious and mirthful entertainment, discourse and actions.” It is meant to further “a deeper insight into those points that were debated at table, for the remembrance of those pleasures which arise from meat and drink is not genteel and short-lived.but the subjects of philosophical queries and discussions remain always fresh after they have been imparted.and they are relished by those who were absent as well as by those who were present at dinner”.

“questions [at a symposium] should be easy, the problems known, the interrogations plain and familiar, not intricate and dark, so that they may neither vex the unlearned nor frighten them.”

The questions [at a symposium] were not too serious; they may deal with a point touching an ancient history. Macrobius says that he who wishes to be a pleasant questioner should ask easy questions and be sure that the subject had been thoroughly studied by the other person. Many symposia questions deal with diet and food:

-are different sorts of food or one single dish eaten at one meal more easily digestible?

-Does the sea or land afford better food?

-Why are hunger allayed by drinking, but thirst increased by eating?

-Why do the Pythagoreans forbid fish more than other foods?

They (the servants) pour a second cup [of wine] for him. And here the son questions his father. And if the son has insufficient understanding [to question], his father teaches him [to ask]: Why is this night different from all [other] nights? ....And according to the son's intelligence, his father instructs him.

The All Night Element

The Haggadah contains one of the most famous stories in rabbinic literature:

A story is told of Rabbi Eliezer, Rabbi Joshua, Rabbi Elazar the son of Azaryah, Rabbi Akiba and Rabbi Tarfon, who were reclining at Bene Berak and were talking about the Exodus from Egypt that entire night, until their pupils came and said to them: “Our masters, the time for the morning Shema has arrived.”

Similarly, the symposia literature is supposed to include the names of the participants, the place, the subject of discussion and the occasion.

During the Saturnalia, distinguished members of the aristocracy and other scholars assembled at the house of Vettius Praetextatus to celebrate the festive time [of Saturnalia] solemnly by a discourse befitting freemen....

Sometimes, the symposium lasted until dawn. As early as in Plato’s Symposium (4 th century B.C.E.), the crowing of the cock reminds the guests to go home. Socrates, on that occasion, went on to the Lyceum (a gymnasium where philosophers also taught)

Begin with Disgrace and Conclude with Praise

“[It is good in a eulogy to]. have ennobled a humble origin by the glory of his achievements.at times weakness may contribute largely to our admiration”

the father at the Seder “begins with disgrace and concludes with praise”.

Rabban Gamliel said that one must explain ”Pesah, Matzah and Maror ” as symbols of different parts of the exodus

Rav (Israel and Babylon; d. 220 C.E.) said that the items must be lifted up when explaining them.