It is true that you are the one who judges, and reproves, who knows all, and bears witness, who inscribes, and seals, who reckons and enumerates. You remember all that is forgotten. You open the book of records, and from it, all shall be read. In it lies each person's insignia.

Rashi on Deuteronomy 23:8:1
לא תתעב אדמי THOU SHALT NOT ABHOR AN EDOMITE utterly, although it would be proper for you to abhor him because he came out against thee with the sword (Numbers 20:18—20).
רש"י על דברים כ״ג:ח׳:ב׳

Deuteronomy 24:17-18
(17) You shall not subvert the rights of the stranger or the fatherless; you shall not take a widow’s garment in pawn. (18) Remember that you were a slave in Egypt and that your God ה' redeemed you from there; therefore do I enjoin you to observe this commandment.
שמות כ״ג:ט׳

Exodus 23:9
(9) You shall not oppress a stranger, for you know the feelings of the stranger, having yourselves been strangers in the land of Egypt.
רמב"ן על שמות כ״ב:כ׳:א׳

AND A STRANGER SHALT THOU NOT WRONG, NEITHER SHALT THOU OPPRESS HIM; FOR YE WERE STRANGERS IN THE LAND OF EGYPT.
The correct interpretation appears to me to be that He is saying: “Do not wrong a stranger or oppress him, thinking as you might that none can deliver him out of your hand; for you know that you were strangers in the land of Egypt and I saw the oppression wherewith the Egyptians oppressed you, and I avenged your cause on them, because I behold the tears of such who are oppressed and have no comforter, and on the side of their oppressors there is power, and I deliver each one from him that is too strong for him. Likewise you shall not afflict the widow and the fatherless child, for I will hear their cry, for all these people do not rely upon themselves but trust in Me.” And in another verse He added this reason: for ye know the soul of a stranger, seeing ye were strangers in the land of Egypt. That is to say, you know that every stranger feels depressed, and is always sighing and crying, and his eyes are always directed towards G-d, therefore He will have mercy upon him even as He showed mercy to you, just as it is written, and the children of Israel sighed by reason of the bondage, and they cried, and their cry came up unto G-d by reason of the bondage, meaning that He had mercy on them not because of their merits, but only an account of the bondage [and likewise He has mercy on all who are oppressed].

(15) You must have completely honest weights and completely honest measures, if you are to endure long on the soil that your God ה' is giving you. (16) For everyone who does those things, everyone who deals dishonestly, is abhorrent to your God ה'. (17) Remember what Amalek did to you on your journey, after you left Egypt— (18) how, undeterred by fear of God, he surprised you on the march, when you were famished and weary, and cut down all the stragglers in your rear. (19) Therefore, when your God ה' grants you safety from all your enemies around you, in the land that your God ה' is giving you as a hereditary portion, you shall blot out the memory of Amalek from under heaven. Do not forget!

זכור את אשר עשה לך REMEMBER WHAT [AMALEK] DID UNTO THEE — If you use false weights and measures then you must apprehend the provocation of the enemy, as it states (Proverbs 11:1): “A false balance is an abomination to the Lord, etc.”, and there is written immediately after this (v. 2): “If intentional sin comes, shame comes”(Midrash Tanchuma, Ki Teitzei 8).

The Prohibition Against Living in Egypt

Altogether the verb zakbar appears in its various declensions in the Bible no less than one hundred and sixty-nine times, usually with either Israel or God as the subject, for memory is incumbent upon both. The verb is complemented by its obverse-forgetting. As Israel is enjoined to remember, so is it adjured not to forget. Both imperatives have resounded with enduring effect among the Jews since biblical times. Indeed, in trying to understand the survival of a people that has spent most of its life in global dispersion, I would submit that the history of its memory, largely neglected and yet to be written, may prove of some consequence.

Only in Israel and nowhcte clse is the injunction to remember felt as a religious imperative to an entire people. Its reverberations everywhere, but they rcach a crescendo in the Deuteronomic history and in the prophets, "Rernember the days of old, consider the years of ages past" (Deut. 32:7)."Remember these things, O Jacob, for you, O Istacl, are My servanr; I have fashioned you, you are My servant; O Israel, never forget Me" (Is. 44:21). "Remember what Amalek did to you" (Deut. 23:I7). "O My people,
remember now what Balak king of Moab plotted against you" (Michah 6:5). And with a hammering insistance: "Remember that you were a slave in Egypt...."

If Herodotus was the father of history, the fathers of meaning in history were the Jews.

(7) After ten days, the word of the LORD came to Jeremiah. (8) He called Johanan son of Kareah and all the army officers, and the rest of the people, great and small, (9) and said to them, “Thus said the LORD, the God of Israel, to whom you sent me to present your supplication before Him: (10) If you remain in this land, I will build you and not overthrow, I will plant you and not uproot; for I regret the punishment I have brought upon you. (11) Do not be afraid of the king of Babylon, whom you fear; do not be afraid of him—declares the LORD—for I am with you to save you and to rescue you from his hands. (12) I will dispose him to be merciful to you: he shall show you mercy and bring you back to-a your own land. (13) “But if you say, ‘We will not stay in this land’—thus disobeying the LORD your God— (14) if you say, ‘No! We will go to the land of Egypt, so that we may not see war or hear the sound of the horn, and so that we may not hunger for bread; there we will stay,’ (15) then hear the word of the LORD, O remnant of Judah! Thus said the LORD of Hosts, the God of Israel: If you turn your faces toward Egypt, and you go and sojourn there, (16) the sword that you fear shall overtake you there, in the land of Egypt, and the famine you worry over shall follow at your heels in Egypt too; and there you shall die. (17) All the men who turn their faces toward Egypt, in order to sojourn there, shall die by the sword, by famine, and by pestilence. They shall have no surviving remnant of the disaster that I will bring upon them. (18) For thus said the LORD of Hosts, the God of Israel: As My anger and wrath were poured out upon the inhabitants of Jerusalem, so will My wrath be poured out on you if you go to Egypt. You shall become an execration of woe, a curse-b and a mockery; and you shall never again see this place. (19) The LORD has spoken against you, O remnant of Judah! Do not go to Egypt! Know well, then—for I warn you this day 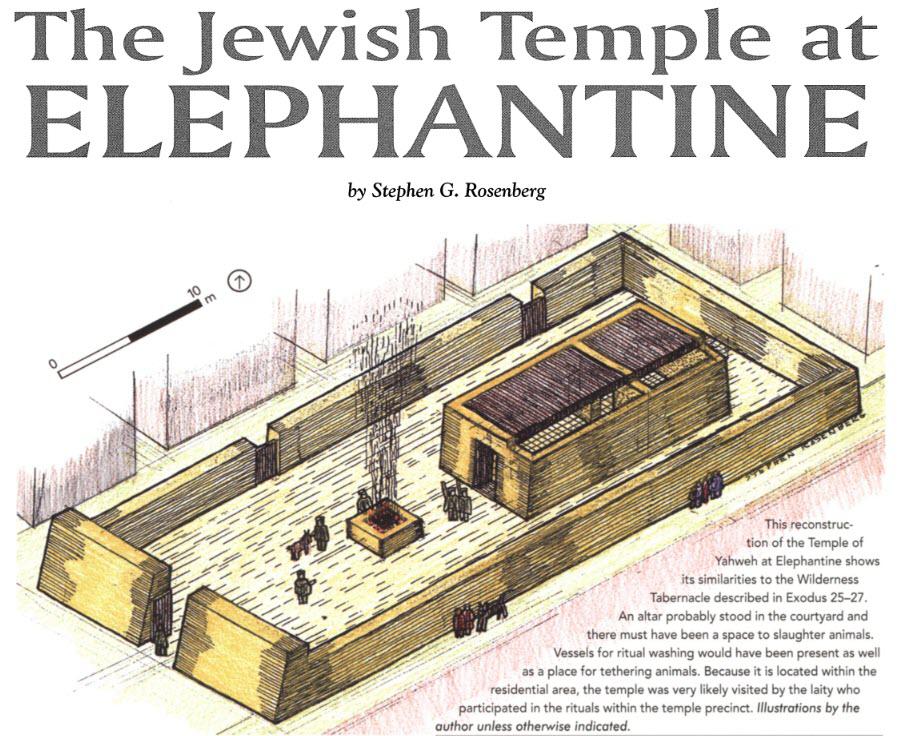 History of the Temple Porten suggested that the Jews may have come to Elephantine as a military garrison in about the middle of the seventh century BCE, during the reign of Manasseh in Judah, to aid Psammetichus I in his campaigns against Nubia (cf. Lewy and Lewy 1968: 135) and in an attempt to dislodge the over- arching power of Assyria (Porten 1968: 119). This early date would have given the Jewish mercenaries considerable time to get established and set up a communal temple well before 525 BCE. However, it is also possible that the Jews came only after 597 BCE, the date of the first invasion of Jerusalem by the Babylonians, when considerable numbers were exiled (2 Kgs 24:16) or even after 586 BCE, when the Babylonians returned and destroyed the Solomonic Temple. It was then that large numbers fled to Egypt taking the prophet Jeremiah with them (Jer 43:5-7). Such a date still leaves ample time for the Jewish colony to establish itself and build a temple prior to Cyrus' conquest in 525 BCE (Kraeling 1961: 142).

.... there is a tradition18 that Maimonides signed his letters saying that he is one who "transgresses three commandments every single day" (the three verses mentioned above). Nevertheless, it seems that this was simply humility on his part, and that it was not actually forbidden,

See: The Prohibition Against Living in Egypt, Parshat Ki Tavo, By Aryeh Citron 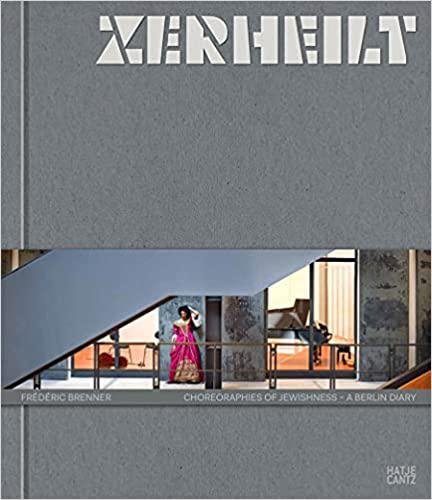 That Berlin has become a city bent on redemption—and that the Jew represents a key figure in this realm—is evident from the city’s “epidemic of Holocaust memorials” and other commemorative practices. Germany, like no other nation in Europe, has undertaken an admirable quest “to come to terms with the past” (Vergangenheits­bewältigung), and in this process, Berlin, where the extermination of the Jews was planned and carried out, takes center stage. The city’s Jewish population has experienced, in the past three decades, a considerable growth in size and diversification. Alongside the native German Jews and the Eastern European Jews who immigrated after the war, Berlin is now home to former Soviet Jews who came after the collapse of the Iron Curtain in the early 1990s, and Israeli Jews who have been relocating here in growing numbers since the turn of the century. Moreover, Jewishness is being staged and celebrated everywhere, from theater to klezmer to Jewish cooking, but this “Jewish revival” often feels less like an act of healing than some novel form of disfigurement—to put it in the words of the poet Paul Celan: “Sie haben mich zerheilt!” (They have healed me to pieces!).

Following more than forty years of photographic storytelling of Jewish life around the world, Frédéric Brenner spent three years exploring Berlin -- a stage for a vast spectrum of expressions and performances of Judaism. In his new photographic essay he portrays individuals -- newcomers, old timers, converts, immigrants and others -- who have made Berlin their home or are just passing through. Via a series of fragmentary insights into this incubator of paradox and dissonance, he reflects on conflicting narratives of redemption and gives light to an ever so present absence. Like a shattered mirror, these images offer a polyphonic, sometimes bizarre and disturbing reflection of and on a topography of displacement and estrangement in contemporary human condition, far beyond the story of Berlin or of Jews. Exhibition: Jewish Museum Berlin, Germany (03.09. -13.06.2022) / Joods Historisch Museum Amsterdam, The Netherlands (Fall 2022).

“[It] felt like stumbling into a piece of street theater, a drama of redemption fit for one of the city’s famous opera houses, part morality play, part masquerade, part theater of memory—all performed above an abyss. […] Jewishness is being staged and celebrated everywhere, from theater to klezmer to Jewish cooking, but this “Jewish revival” often feels less like an act of healing than some novel form of disfigurement.”

– Frédéric Brenner in his essay on the exhibition ZERHEILT: HEALED TO PIECES