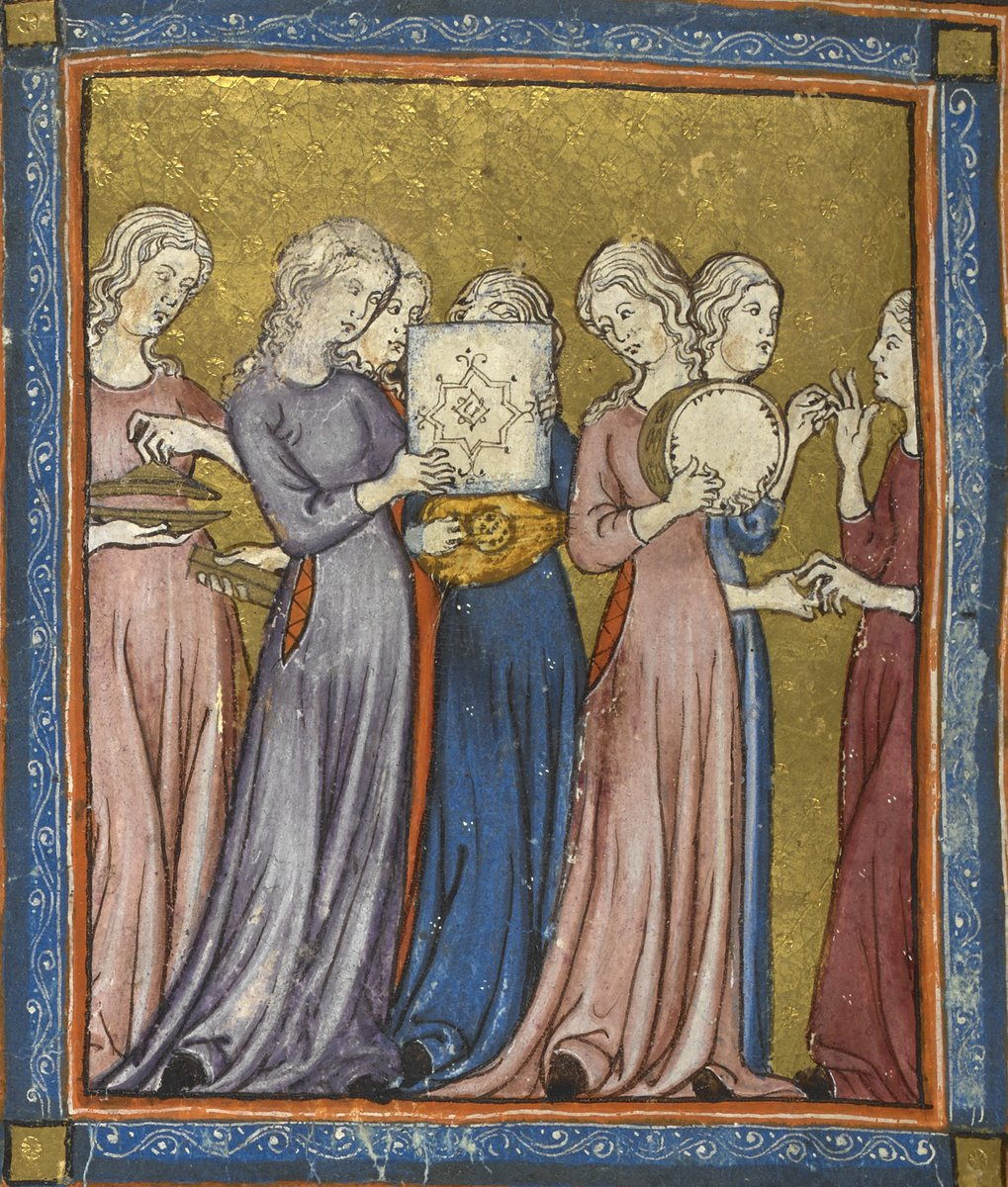 This image is from the "Golden Haggadah" (1320-1330), so called due to the gold-leaf background of its miniatures. The entire codex has been digitized and can be viewed on this British Library webpage.

The image depicts the following verse in Exodus:

(20) Then Miriam the prophetess, Aaron’s sister, took a timbrel in her hand, and all the women went out after her in dance with timbrels.

Red heifer, seraph serpents, and a talking donkey: Oh my! In the combined portions Chukat-Balak, there are numerous themes to study and contemplate (see the summary and even a comedic video at the bottom of this sheet), but the death of Miriam is significant. Miriam is the first of several biblical women to be honored with the title of "prophet" (see Exodus 15:20), and the mention (although brief) of the time (first new moon) and place (Kadesh) of her death, places her status as exalted as her siblings Moses and Aaron:

(1) The Israelites arrived in a body at the wilderness of Zin on the first new moon, and the people stayed at Kadesh. Miriam died there and was buried there.

Although no formal period of mourning upon Miriam's death is mentioned as for Aaron (30 days, Numbers 20:29), Miriam is said to have died by the "kiss" of death, as did her brothers, in a privileged status of a prophet:

The Sages taught: There were six people over whom the Angel of Death had no sway in their demise, and they are: Abraham, Isaac, and Jacob, Moses, Aaron, and Miriam....Isaac, and Jacob, as it is written with regard to them, respectively: “With everything,” “from everything,” “everything”; since they were blessed with everything they were certainly spared the anguish of...the Angel of Death....Moses, Aaron, and Miriam, as it is written with regard to them that they died “by the mouth of the Lord,” which indicates that they died with a kiss, and not at the hand of the Angel of Death.

FUN FACT: There is a more contemporary Miriam worth remembering: Miriam Michelson. In celebration of the 100th anniversary of women’s suffrage in the U.S. this year, Rabbi Carole Balin, Ph.D., is sharing eight chapters of an "alternative Book of Numbers” designed to tell the stories of Jewish women who combined civic engagement with Jewish values in a 40-year struggle “in the wilderness” to pass the 19th Amendment.​ Learn about Miriam Michelson in this article:

Another Miriam Worth Remembering

By Rabbi Carole B. Balin, Ph.D.

The prophet Miriam is closely associated with water: As a young girl, she watched as her baby brother was saved from drowning in the Nile (Exodus 2:1-9 and Sotah 9b:8), she celebrated in song at the Sea (Exodus 15:20-21), her well accompanied the Israelites during their wanderings in the desert (Shabbat 35a:6 and Rashi on Numbers 20:10:2), and after Miriam's death, the water of the well dries up, but the Eternal instructs Moses to "assemble the people that I may give them water. (Numbers 21:16-17).

The image below depicts the well attended by Moses with water flowing to all 12 tribes of the Israelites: 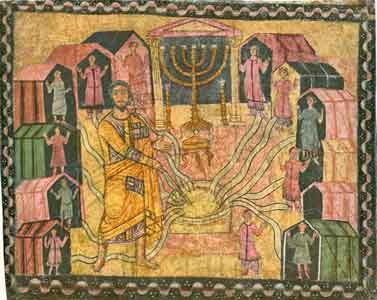 The Gemara raises an objection from a baraita: Rabbi Yosei, son of Rabbi Yehuda, says: Three good sustainers rose up for the Jewish people during the exodus from Egypt, and they are: Moses, Aaron and Miriam. And three good gifts were given from Heaven through their agency, and these are they: The well of water, the pillar of cloud, and the manna. He elaborates: The well was given to the Jewish people in the merit of Miriam; the pillar of cloud was in the merit of Aaron; and the manna in the merit of Moses. When Miriam died the well disappeared, as it is stated: “And Miriam died there” (Numbers 20:1), and it says thereafter in the next verse: “And there was no water for the congregation” (Numbers 20:2). But the well returned in the merit of both Moses and Aaron.

Because of its similarity to Rabbi Ḥanina’s statement, the Gemara cites that which Rabbi Ḥiyya said: One who wants to see Miriam’s well, which accompanied the Jewish people throughout their sojourn in the desert, should do the following: He should climb to the top of Mount Carmel and look out, and he will see a rock that looks like a sieve in the sea, and that is Miriam’s well. Rav said: A spring that is portable, i.e., that moves from place to place, is ritually pure and is regarded as an actual spring and not as drawn water. And what is a movable spring? It is Miriam’s well.

There is no one greater than Aaron or Miriam — through Miriam's merit a well sprang up and gave drink, and clouds of glory would surround Israel through the merit of Aaron. But inasmuch as they gave permission to their mouths and they spoke against Moses, they were at once punished (Num. 12).

For the "Song" portion of this source sheet, we read in Numbers 21:16-18, that the thirst of the wandering Israelites is finally quenched at the well of Beer (the name itself means "well") after Aaron died (Numbers 20:24-29) and the Israelites suffered attacks of the seraph serpents! (Numbers 21:5-6). (See the image of the miraculous well from the Dura Europos Synagogue above.) The grateful Israelites celebrated in song with this verse:

(16) And from there to Beer, which is the well where the LORD said to Moses, “Assemble the people that I may give them water.” (17) Then Israel sang this song: Spring up, O well—sing to it— (18) The well which the chieftains dug, Which the nobles of the people started With maces, with their own staffs.

Commentaries trace the well and the song back to Miriam due to the fact that verse 17 parallels the lead-in to the Song of the Sea (Shirat ha-Yam שירת הים) in Exodus 15:1: "Then Moses and the Israelites sang this song..." As explained in The Torah: A Women's Commentary, Tamara Cohn Eskenazi, Andrea L. Weiss, URJ Press, c. 2008, pp. 387ff: Contemporary scholars have concluded (based on literary, historical, sociological, and musicological evidence) that the Song of the Sea is attributed to Miriam and the title The Song of Miriam is used by contemporary scholars. Evidence shows that the genre of "victory songs" were typically composed and performed by women to greet troops after battle.

Although the passage (Numbers 21:7) does not associate the well at Beer with Miriam, one of the ancient Aramaic translations of the Torah, the Targum Yerushalmi for Numbers 21, indicates the association:

And when the Kenaanite, king Arad, who dwelt in the south, heard that Aharon was dead, that holy man on account of whose merit the Cloud of Glory had protected Israel; that the pillar of the Cloud had been taken up; and that the prophetess Miriam was dead, on whose account the well had flowed, but had (since) been hidden;

For another example of "song," we turn now to Parashat Balak, in which Balak, the king of Moab, hires the seer Balaam to curse the Israelites in order to subdue them, as they had become so numerous as to "hide the earth from view" (Numbers 22:11). After several episodes of conversations with the Eternal, an angel, and a talking donkey, Balaam and Balak eventually come to the peak of Peor. Upon seeing the encampment of the Israelite tribes, Balaam blessed (rather than cursed) them, saying:

This blessing, with its origin in a curse, is, to this day, typically recited or sung in the daily morning liturgy. In his d'var Torah, Mah Tovu—From Torah to Prayer, Rabbi Yoel H. Kahn explains that the Mah Tovu prayer is "a tapestry of biblical verses and fragments." The 9th-century Seder Rav Amran Gaon mentions that one should recite Mah tovu ohalecha. . .V'ani, b'rov chas'd'cha upon entering a synagogue. Other verses are taken from Psalms and the order of verses have changed over time.

Musical arrangements of Mah Tovu are ubiquitous! I offer two versions here that are perhaps lesser known: The first by the art music composer Miriam Gideon and the second, a jazz arrangement, by Jonathan Klein.

Shirat miriam l’shabbat (Miriam’s Song of the Sabbath), Miriam Gideon's first musical expression of the kabbalat shabbat (welcoming the Sabbath) and Sabbath evening liturgies as a unified artistic statement, was commissioned by Cantor David Putterman for his 1974 Sabbath Eve Service of Liturgical Music by Contemporary Composers. For more information about this album, visit the Milken Archive of Jewish Music page.

To learn more about Miriam Gideon and other composers, visit the Women Composers of the Milken Archive page.

Fans of jazz may enjoy this version of Mah Tovu by Jonathan Klein and the Jonathan Klein Jazz Ensemble on the album Hear O Israel: A Sabbath Service in Jazz from the Milken Archive.

Translation of Ma Tovu by the Jonathan Klein Jazz Ensemble

How lovely are your dwellings, O House of Israel.
O Lord, through Your abundant kindness I enter Your house
and worship You with reverence in Your holy sanctuary.
I love Your presence in this place where Your glory resides.
Here, I bow and worship before the Lord, my Maker.
And I pray to You, O Lord, that it shall be Your will
to answer me with Your kindness and grace,
and with the essence of Your truth that preserves us.

Chukat is the 39th parashah in the annual cycle of Torah reading. It tells stories of the Israelites in the desert, including Miriam's death, the laws of the Red Heifer, Moses striking the rock, Aaron's death, and wars with King Og of Bashan.

Balak is the 40th parashah in the annual cycle of Torah reading. It tells the story of the Moabite king Balak and the prophet Bilaam, who tries to curse the Israelites but blesses them instead.

You can read the Chukat Torah Portion here and you can listen to the reading in Hebrew below.

You can read the Balak Torah Portion here and you can listen to the reading in Hebrew below.